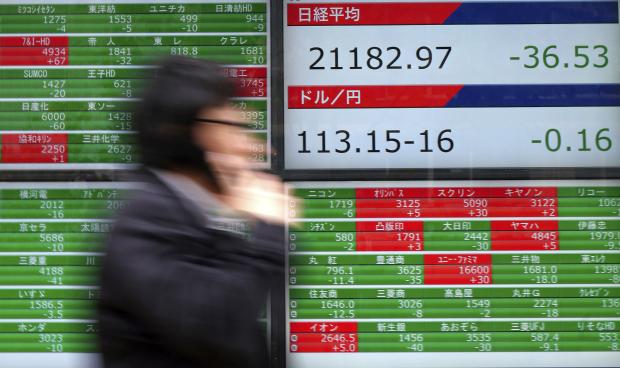 A man walks past an electronic stock board showing Japan’s Nikkei 225 index at a securities firm in Tokyo Tuesday, Dec. 11, 2018. (Photo by EUGENE HOSHIKO / AP)

SINGAPORE — World markets were mostly higher on Tuesday after the U.S. and China broached plans for talks to soothe a festering trade dispute.

U.S. Treasury Secretary Steven Mnuchin and Chinese Vice Premier Liu He have spoken by phone about “the promotion of the next economic and trade consultations,” a statement by China’s Commerce Ministry said Tuesday. It did not elaborate.

This indicates that the detention of Meng Wanzhou, the chief financial officer of Chinese telecommunications giant Huawei, in Canada may not derail trade talks.

Meng is wanted in the U.S. for allegedly misleading banks about the company’s business dealings in Iran. China has protested her arrest and a bail hearing for Meng is underway in Vancouver, British Columbia.

Still, traders fear a 90-day tariffs cease-fire may not be enough for the countries to resolve deep-seated issues.

“While traders have responded positively to comments from China providing a semi-road map going forward, they are waiting for something concrete. Markets want to see a definite timeline against a backdrop of global risks,” Stephen Innes of OANDA said in a phone interview.

British Prime Minister Theresa May has postponed a parliamentary vote on a Brexit deal that she was widely expected to lose.

The deal, brokered between May and 27 other European leaders, has been criticized by Brexit supporters and opponents alike.

May acknowledged Monday that deal would likely be rejected “by a significant margin” and said she will seek assurances from the European Union before calling for another vote. A date has not been set.

On Monday, U.S. chipmaker Qualcomm said it won an order in a Chinese court banning sales of some Apple phones in China.

This is part of a lengthy dispute over two Qualcomm patents allowing users to format photos and manage phone apps using a touch screen.

Although Qualcomm said the ban applies to models of the iPhone 6S through X, Apple said all iPhones will remain available for customers in China. Qualcomm shares jumped 2.2 percent to $57.24 on the news.

Oil prices were steady after a sharp decline overnight that erased gains from news of a production cut by OPEC countries and other major oil producers.