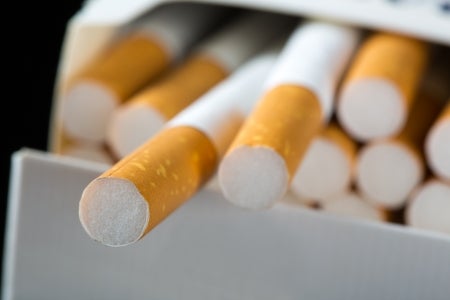 Representatives of tobacco companies warned lawmakers on Monday that raising the excise tax on cigarettes would have significant negative effects on tobacco workers and even on government revenues.

“It cannot be helped but noticed that since the passage of the increased excise taxes, the pertinence of illicit whites has increased,” Dy said. “Just last week, we conducted a raid with the Bureau of Internal Revenue in Tacloban, we caught a warehouse that was selling cases of illicit whites.”

“Illicit whites” is a term for “counterfeit cigarette.”

“To put that in perspective, under the new tax, that would be worth somewhere in the ballpark of P240 million […] Just for context, an old machine can produce 24 cases in an hour, in a day that’s around 190 cases, in a month that’s around 4,000 cases. So in every month that these factories remain in operation, the government loses roughly P120 million,” he added.

And if the practice of producing illicit whites would continue, Dy said it would impact tobacco farmers and workers.

As most cigarette consumers are poor people, they will naturally seek the lowest-priced product.

“The problem here is that the goal of smoking cessation only works in a closed system where the only people being taxed are the only ones actually selling,” he says. “The problem is that downshifting still occurs because the number one buyers of cigarettes are poor, so they would go to the cheapest product.”

After 2024, the excise tax will increase by 4 percent each year.

Currently, there are two proposals to increase the excise tax on cigarettes.

House Bill No. 6648, authored by Quezon 4th District Rep. Angelina Tan, places the increase of excise tax for each pack of cigarettes at 9 percent starting 2019.

Another measure from Albay 2nd District Rep. Joey Salceda, House Bill No. 4575, places the additional excise tax of P5 per pack, and an increase of 5 percent every year after 2022.

Salceda reasoned out that the Philippines actually has among the lowest cigarette prices in the world, all the while having a high per capita income in terms of cigarette spending.

“If you do a comparative analysis of the prices of tobacco, cigarettes across the world, the Philippines is actually the third-lowest and more than that, we’re only higher than Myanmar and Cambodia but that’s a bad comparison,” the lawmaker said.

Patrick Muttart, corporate affairs chief of Philip Morris International, said his company had already removed a huge number of employees due to the weakening tobacco industry.

“On the manufacturing front, our own company has experienced first-hand the effects of the declining volume […] In the last five years our company has been forced to remove 2,400 employees, and we have currently closed two big processing facilities in Mindoro and Vigan,” Muttart said.

“The effect of the declining volume of legitimate tobacco products has affected the entire tobacco supply chain,” he added.

Muttart said that while the company supported the creation of excise taxes on tobacco products brought about by the TRAIN Act, they would like to see studies on its effect before nodding to new additional taxes.

“I’d like to reiterate that the PMFTC supports the retention of the current excise tax rates […] and respectfully, we believe that before the new proposals for amending excise tax rates are entertained, the government must be given the opportunity to first review the implementations of the existing rates,” he said. /atm