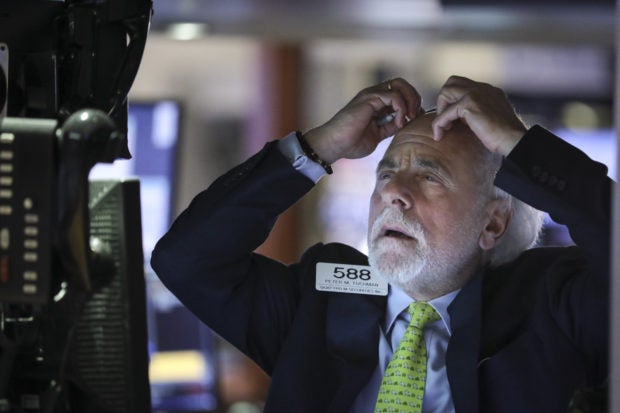 A trader works at his desk during the closing bell on the floor of the New York Stock Exchange (NYSE), on November 20, 2018, in New York City. Markets dipped sharply again on Tuesday, Nov. 20, 2018, with the Dow Jones Industrial Average closing over 500 points down. Technology stocks, including Apple, continue to drag down the markets. AFP

NEW YORK, United States – Global stocks plunged Tuesday as a sharp downward trend in the technology sector hit valuations hard and the Dow gave up all its gains for the year.

In Europe and Asia, there was much talk about the surprise arrest of Carlos Ghosn, boss of the Renault-Nissan-Mitsubishi alliance, and stocks in the three companies plunged, while Wall Street suffered a second big decline.

Analysts at Capital Economics forecast the tech sector would continue to underperform in the coming quarters because of expected economic weakness in both the United States and China.

“Given the highly-cyclical nature of the IT sector, we have been arguing for a while that growth in its earnings would be hit especially hard in these circumstances,” they said.

The S&P 500 also slid into the red for the year, while the tech-rich Nasdaq Composite Index clung to a modest gain for all of 2018.

Besides technology, US sectors with bruising declines included petroleum, following a big dip in oil prices, and retail, after a series of mixed earnings reports just ahead of the key holiday shopping season.

Analysts have blamed the weakness on worries about slowing global growth exacerbated by a series of Federal Reserve interest rate hikes and the burgeoning US-China trade dispute.

Some market watchers have said the fall has been exacerbated by light trading volumes this week ahead of Thursday’s Thanksgiving holidays when markets will be closed.

“We have much more of a Fed problem than a problem with anyone else,” Trump told reporters, the latest sign of the US president’s indifference to criticism that his comments on monetary policy help undermine central bank independence.

In Asia, Nissan lost 5.5 percent and Mitsubishi sank 6.9 percent as they prepared to sack Ghosn after it emerged he had been taken into custody as detectives looked into claims he underreported his income for years.

Ghosn has long been a major player in the car industry and is credited with resurrecting the once-troubled Nissan, which he allied with Mitsubishi and France’s Renault.

He heads the Renault-Nissan-Mitsubishi alliance and serves as CEO of Renault.

“The market doesn’t consider the share’s fall to be a buying opportunity,” said Cedric Besson, a portfolio manager at Gaspal Gestion.

Investors suspect that a former high-ranking Danske Bank manager meant Deutsche Bank when he told a parliamentary commission in Copenhagen that nearly $150 billion of doubtful transactions had been handled by the US subsidiary of “a big European bank.” /cbb

Read Next
Dow dives 2.2%, moves into the red for 2018
EDITORS' PICK
Guanzon for Marcos DQ, sees ‘delay, interference’
Rise to perfection: Spot on tiles for your stair risers
NUSTAR Resort and Casino: Cebu’s next lifestyle and leisure gem
COVID-19 cases in NCR, nearby provinces now going down — OCTA
Pharmally owes P6.3B in taxes, senators told
Step up your vlog game with vivo’s newest smartphone
MOST READ
Leni mansplained? Abunda ‘interruptions’ stir own buzz
6 areas to be placed under Alert Level 3 from Jan. 28 to Feb. 15
Rita Avila dismayed by Boy Abunda’s interview with Leni Robredo: ‘Parang ayaw mo pasagutin’
Gordon tells Duterte: I did not steal from Subic funds
Don't miss out on the latest news and information.