Is there hope for the Philippines? | Inquirer Business

Is there hope for the Philippines?

Over the past 50 years, 18 of the 71 emerging economies outperformed global benchmarks and their peers.

This is based on the findings of McKinsey Global Institute (www.mckinsey.com, September 2018). These 18 countries, led by China, reduced the number of extreme poor by about one billion people since 1990.

Eleven countries grew their GDP per capita in the past 20 years.  In Asia, they are Myanmar, Azerbaijan, Turkmenistan, Cambodia, Laos, India, Kazakhstan, Vietnam and Uzbekistan, in that order. The other two countries outside Asia are Belarus and Ethiopia.

Five countries saw their GDP per capita growing by over 3.5 percent a year during 2011-2016. In Asia, they are Bangladesh, the Philippines, Rwanda, Sri Lanka and Bolivia. They are called “future outperformers.” They also ranked in the top 25 percent of McKinsey’s performance index.

What are the factors that made some countries excel?

The common features are high investments (or capital accumulation) and deep connections with the global economy. In broad outline:

Governments “invest in building competence, are agile and open to regulatory experimentation, and are willing to adapt global macroeconomic practices to local contexts.

Their competition policies create impetus for productivity, increased investments and the rise of competitive firms.

Government effectiveness means “perceptions of the ability of the government to formulate and implement sound policies and regulations that permit and promote private sector development.”

Regulatory quality means “perceptions of the ability of the government to formulate and implement sound policies and regulations that permit and promote private sector development.”

Rule of law means “perceptions of the extent to which agents have confidence in and abide by the rules of the society, and in particular the quality of contract enforcement, property rights, the police, and the courts, as well as the likelihood of crime and violence.”

In Asean, considering the past 50 years, the Philippines has a lot of catching up to do. The “golden years” were elusive. The past six years dramatically improved but its poverty remained very high (21.6 percent in 2015), way more than double that of Asean peers. 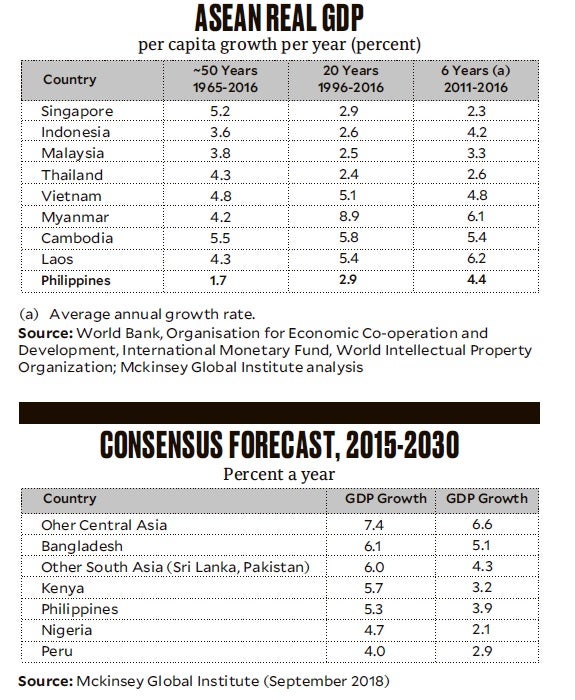 Is there hope for the Philippines?

Yes, if it gets its act together. It will be one of the fastest emerging economies: if government will not mess up its mandate of growth and poverty reduction, if it will sustain investments and global linkages, if it improves institutions and appoint people for competence and integrity, and not just political connections.