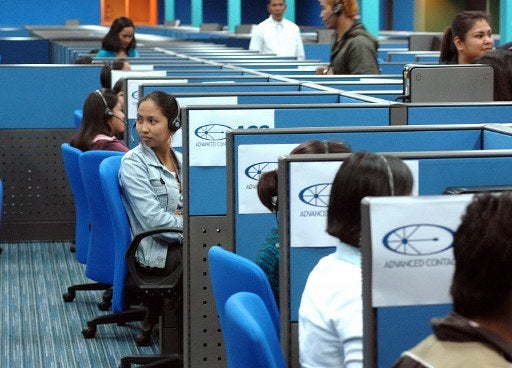 With uncertainty clouding its horizons, the IT-BPM industry might have to rethink its future after growing far below expectations since 2016, according to a top official.

Rey Untal, president and CEO of the Information Technology and Business Process Association of the Philippines (IBPAP), said the industry might need to reconsider its projections for the next three years.

Disappointing figures on job growth and revenues earned in the 18 months since the end of 2016 might lead the group back to the drawing board.

This next step will still need the approval of the IBPAP board of trustees, he said, which decides on the policies and objectives of the group.

“[Given] the fact that our actual [performance] shows a difference to what our targets are, to me, the prudent next course of action is to recalibrate,” he told reporters on Tuesday late afternoon.

Back in 2016, the industry group launched its 2022 roadmap, wherein it targeted 1.8 million direct jobs and hitting $38.9 billion worth of revenues.

The move, however, to give its once rosy future another look also casts a shadow of doubt on the industry’s 2022 target, which has been burdened lately by the weight of tax reform.

“The minimal outcome of that recalibration will be a revised projection of what the headcount growth is and the revenue to be generated over the course of at the very least three years,” he said.

“Before, we could do a long term projection with a fair amount of certainty. Right now, many of the analysts would stick to a two year cycle in terms of projections because of the dramatic shift of the landscape overall,” he added.

This time, the new projections would cover the likely impact of the so-called Trabaho bill, which might make the cost of doing business more expensive for many big players in the industry.

The Tax Reform for Attracting Better and High-quality Opportunities (Trabaho) bill, the second tax reform package of the Duterte administration, will lower corporate income taxes while rationalizing the tax incentives offered to businesses.

The latter part is seen to adversely affect economic zones, many of which house IT-BPM firms. Regardless if the bill is passed in Congress this year or anytime soon, the industry will still be affected in one way or another.

“If the bill itself is passed, the study will now account for the actual [bill]. If the bill is not passed and there is a likelihood that it will still be passed at some point, the uncertainty continues also,” he said.

“So in one [way] or the other, I think it would still have a material impact on the final outcome,” he added.

IBPAP has previously commissioned a study to gauge the possible impact of the bill.

While it essentially pointed to slower growth in terms of job creation and revenues, its estimates were likely conservative since some provisions that got passed in the House of Representatives were worse than what the study expected.

On Tuesday, the industry concluded its first ever international innovation summit. Its parting words included the results of a market study, which was meant to show if the industry was still on track of its targets.

The figures, however, still leave more questions than answers. The numbers only pointed to the performance of the industry for 18 months since 2016, but did not say how far the industry fared in 2017 alone.

IBPAP did not disclose the breakdown of the figures.

Based on the figures, the industry grew four percent in terms of new jobs to 1.19 million from 1.14 million at the end of 2016.

In terms of revenue, the industry also grew 4 percent in revenue to $23.8 billion from $22.9 billion by 2016 yearend. Both figures and

“The growth, however, is slower than the 8 percent annual growth rate that the roadmap 2022 originally projected,” said Lito Tayag, IBPAP Chair of its Board of Trustees and Country Managing Director of Accenture Philippines, during the summit.

“We believe that we were impacted by the wait and see attitude of investors and potential locators due to a number of geopolitical issues and the uncertainty over incentives rationalization,” he added. /jpv