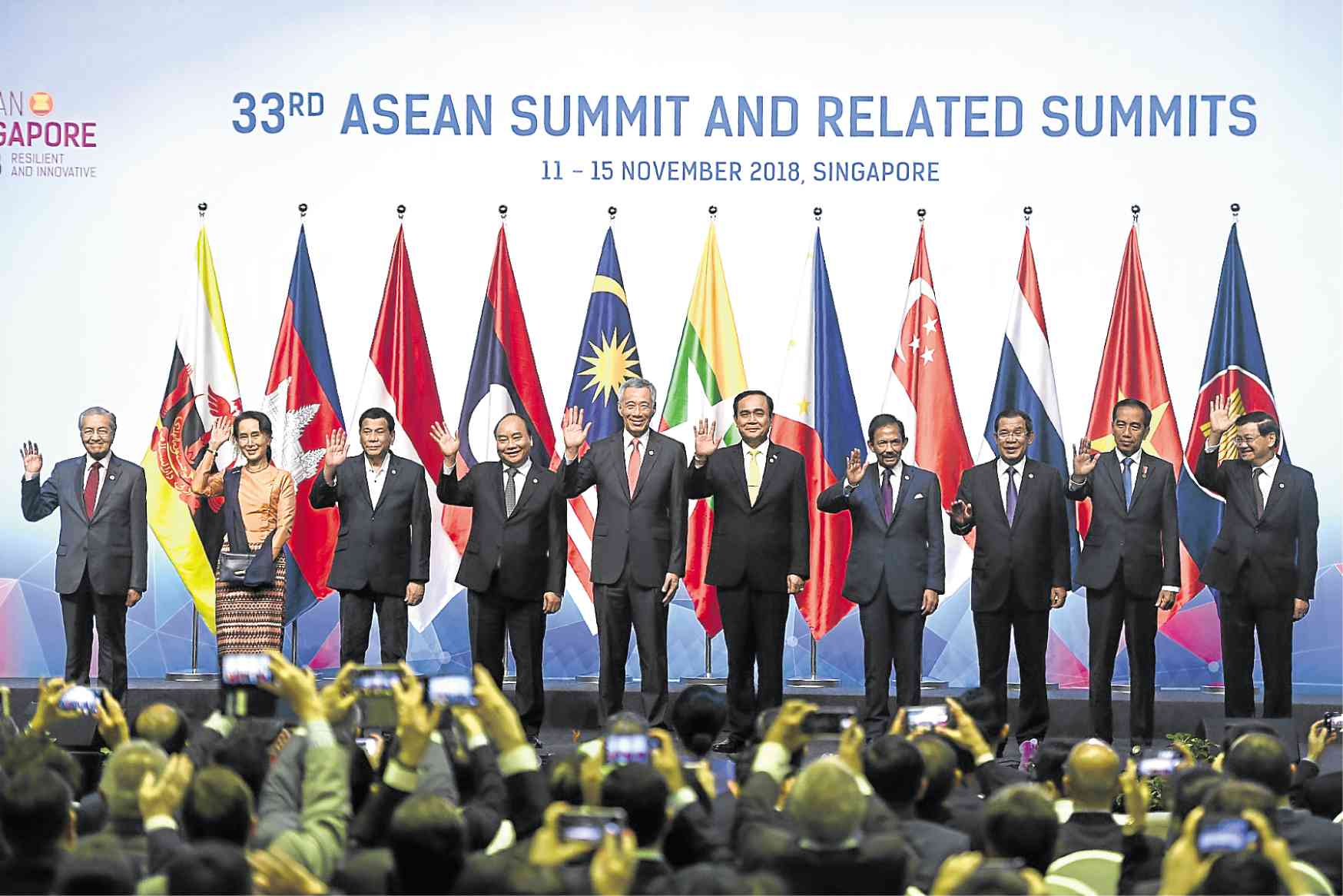 STRONG TALK ABOUT FREE TRADE Members of the Association of Southeast Asian Nations, many of which rely on trade to grow their economies, are responding to US President Donald Trump’s tariff battle with China with strong talk about free trade at the Asean Summit in Singapore. —AFP

SINGAPORE — The signing of the Regional Comprehensive Economic Partnership (RCEP) — a China-backed bid to complete the world’s largest trade deal without the United States — has been pushed back to 2019.

RCEP, covering half the world’s population, is billed as an antidote to US President Donald Trump’s “America First” agenda, which has seen tariffs imposed on almost half of all Chinese imports to the United States and retaliatory levies by Beijing.

Chinese Premier Li Keqiang, who is attending the summit to rally support for the deal, said he hoped RCEP would be signed and implemented next year.

“It (RCEP) is going to deliver real benefits to the people of our region,” he said in an address on Tuesday.

China is now the standard-bearer of global free trade, he added, with RCEP at the heart of its strategy.

RCEP is a free trade deal among the 10-member states of Asean and six Asia-Pacific states with which the group has existing free trade agreements. These are Australia, China, India, Japan, South Korea and New Zealand.

“It’s going to send a message to the international community that we stand by free trade… with rising protectionism and strains on free trade we need to advance the RCEP negotiations,” Li said.

He conceded the Chinese economy was facing “challenges” in the wake of the trade war with the United States, but he insisted strong fundamentals meant radical intervention was not the remedy.

“Despite downward pressures we will not resort to massive stimulus,” Li said.

At a press briefing, Lopez said seven out of the 18 chapters of the agreement had been finalized: customs procedures and trade facilitation, government procurement, institutional provisions, sanitary and phyto-sanitary measures; standards, trade regulations and conformity assessment procedures; small-and-medium enterprises, and economic and technical cooperation.

“We have now entered the most critical stage of the negotiations, with a greater focus on market access for goods, investments and services,” Lopez said on Tuesday afternoon.

Lopez said RCEP, if concluded by next year, would increase the volume of products included in the trade liberalization within Asean countries to 92 percent.

“In trade in goods, right now we can expect maybe about 15-percent growth. Trade in services, about 6 percent, and then investments, about 12 percent,” he added.

The negotiations on the proposed agreement formally began on Monday, with RCEP initially expected to be signed during this week’s three-day summit here.

India’s concerns over opening its markets to competition, in particular from Chinese businesses, has been a key sticking point in the several years of negotiations.

But New Delhi’s delegation welcomed the incremental steps toward the establishing the trade agreement.

“The future lies in RCEP,” Indian Trade Minister Suresh Prabhu told reporters, but urged a patient approach to talks to ensure “every country will benefit from it.”

A draft leaders’ statement on RCEP noted the urgency of reaching an agreement “given the current headwinds faced by the global economy.”

RCEP was given extra impetus after Trump pulled the United States out of the rival Trans-Pacific Partnership (TPP).

TPP is still alive even without Washington, but RCEP is now the world’s biggest trade deal.

But the Beijing-backed pact is much less ambitious than the TPP in areas such as employment and environmental protection.

The remaining 11 countries in TPP are preparing to inaugurate the revised trade deal, the Comprehensive and Progressive Trans-Pacific Partnership, following Australia’s ratification earlier this month. The deal is due to take effect on Dec. 30.

Several other economies are preparing to try to join the pan-Pacific accord, including the Philippines and South Korea. —With reports from AFP and AP