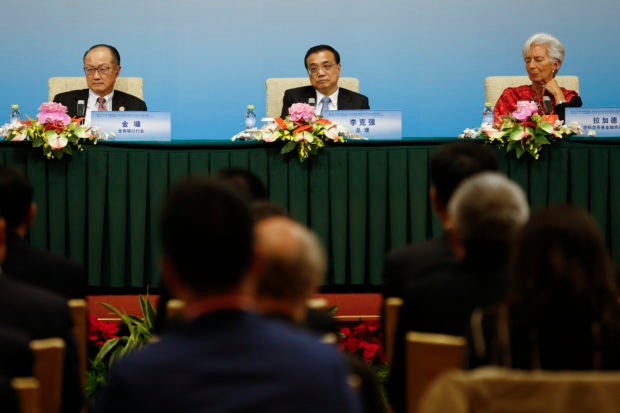 With the US and China embroiled in their worst trade conflict in decades, global growth has “plateaued and some downside risks have materialized,” the leaders said in a joint statement issued after a meeting in Beijing.

“We are concerned about a further escalation of trade tensions, and the spillover effects on vulnerable emerging markets,” the statement said, specifically mentioning employment as a concern.

The leaders said they were “very strongly concerned” about protectionism and one-sided measures and urged support for broader efforts such as the World Trade Organization.

Conflicts over technology policies and other trade issues have led the US to impose tariffs on billions of dollars’ worth of Chinese exports. China has responded in kind.

The disruptions to trade as companies adapt and prices rise are adding to pressures on China’s leadership as the economy slows due to longer-term factors.

IMF Managing Director Christine Lagarde said the IMF forecasts that China’s economy will grow at a 6.6 percent annual rate this year, slowing to 6.2 percent next year.

But she gave Beijing credit for tackling some key troubles.

“Significant progress has been made in rebalancing the economy, slowing credit growth, addressing risks in financial sector and government off-budget borrowing, and continuing to open up the economy,” she said in an address to the meeting.