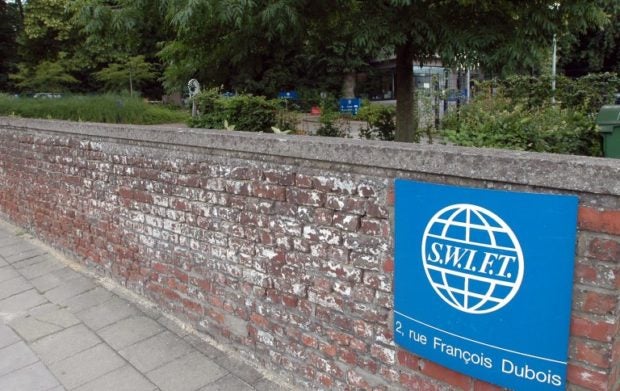 An illustration picture shows the SWIFT logo at their headquarters in Brussels, 26 June 2006. AFP

BRUSSELS, Belgium – The SWIFT banking network, the backbone for international monetary transfers, said Monday it has suspended several Iranian banks from its service, after the United States reimposed nuclear sanctions on Tehran.

“In keeping with our mission of supporting the resilience and integrity of the global financial system as a global and neutral service provider, SWIFT is suspending certain Iranian banks’ access to the messaging system,” it said.

“This step, while regrettable, has been taken in the interest of the stability and integrity of the wider global financial system.”

Without its services, Iranian banks will find it more difficult to do business with any client prepared to brave US sanctions to maintain ties with Tehran.

Some US sanctions on Iranian banks and oil exports had been suspended after Iran signed a landmark 2105 deal with six world powers to curtail its nuclear ambitions.

But these came back into effect Monday after President Donald Trump pulled out of the accord and demanded that the world again turn up the economic heat on Tehran.

US Secretary of State Mike Pompeo said waivers would be issued to allow eight countries to buy Iranian oil, but that otherwise the measures would be “relentless.”

This could mean European and other banks and businesses face secondary sanctions if Washington deems them in breach of sanctions, and US officials have been pressing SWIFT to act.

The network connects 11,000 banks and financial institutions in 200 countries and territories, while priding itself on taking a neutral political stance.

It does not hold or manage client funds, but allows the banks to transfer funds by sending messages across the network. /cbb