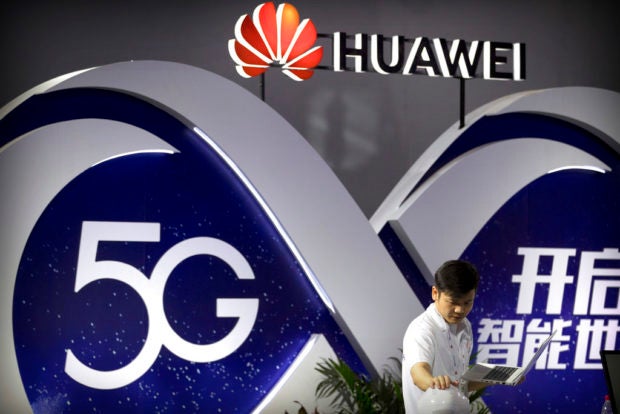 In this Sept. 26, 2018 photo, a staff member uses a laptop computer at a display for 5G wireless technology from Chinese technology firm Huawei at the PT Expo in Beijing. A spy chief said in a speech released Tuesday, Oct. 30, 2018, that Australia’s critical infrastructure including electricity grids, water supplies and hospitals could not have been adequately safeguarded if Chinese-owned telecommunications giants Huawei and ZTE Corp. had been allowed to become involved in rolling out the nation’s 5G network. (AP Photo/Mark Schiefelbein)

CANBERRA, Australia — Australia’s critical infrastructure including electricity grids, water supplies and hospitals could not have been adequately safeguarded if Chinese-owned telecommunications giants Huawei and ZTE Corp. were allowed to help roll out the nation’s 5G network, a spy chief said.

Mike Burgess, director-general of the Australian Signals Directorate, said his cyber experts had backed the government’s decision in August to bar the two Chinese companies that he described as “high-risk vendors.” It was the first time the secretive agency had disclosed such information.

“My advice was to exclude high-risk vendors from the entirety of evolving 5G networks,” Burgess said in a recent speech released by his office on Tuesday.

“But the distinction between ‘core’ and ‘edge’ collapses in 5G networks. That means that a potential threat anywhere in the network will be a threat to the whole network,” Burgess said.

The next generation of telecommunications networks will be at the top of every country’s list of critical national infrastructure, he said.

“5G technology will underpin the communications that Australians rely on every day, from our health systems and the potential applications of remote surgery, to self-driving cars and through to the operation of our power and water supply,” Burgess said. “The stakes could not be higher.”

Huawei was banned from bidding for contracts for Australia’s broadband network in 2011. ZTE is a Chinese maker of mobile devices.

The warning came as an Australian security think-tank raised concerns on Tuesday about increasing collaboration between Australian universities and China’s People’s Liberation Army (PLA) scientists on research programs such as hypersonic missiles and navigation technology.

Australian Strategic Policy Institute researcher Alex Joske said in his report that some of the Chinese scientists hid their military backgrounds by claiming to be visiting scholars from non-existent institutions.

Since 2007, the PLA had sponsored more than 2,500 military scientist and engineers to study overseas, the report said.

Based on peer-reviewed publications co-authored by PLA and non-Chinese scientists, the United States, Britain, Canada, Australia, and Germany were the top five countries engaged in research collaboration with the Chinese military since last year, the report said.

The report makes several recommendations, including encouragement for universities to collaborate with allied countries rather than non-allied militaries on strategic research.

“It’s not in our interests to help a non-allied military develop advanced military technology,” Joske said. “We need better visa screening to make sure that people who’ve lied on their visa applications or are seeking to come to Australia to develop better military technology for China aren’t let into the country.”

Education Minister Dan Tehan said in a statement that Universities were self-governing institutions best able to make decisions about the nature of their collaborations while also satisfying all relevant Australian laws and security requirements.

The advocacy group Universities Australia said in a statement that Australian universities carefully assess applications from students from all countries and liaise with defense and security agencies as needed.

“Australian universities help to advance Australia’s national interests through their research and education ties with students and researchers all around the world,” the statement said.

The Defense Trade Controls Act gives the government and Defense Department oversight on the provision of information on any technology or research that could have military applications. That legislation is under review. Joske said it should be expanded to prevent Chinese military scientists from learning about sensitive technologies while in Australia.

Several governments have scrutinized Huawei, the world’s largest telecoms equipment supplier, over its links to the Chinese government. The private Chinese company started by a former People’s Liberation Army major in 1987 suffered a setback in 2012 when a U.S. congressional report said it was a security risk and warned phone companies not to buy its equipment.

Shenzhen-based Huawei has said it would never give Australian customer data to Chinese spy agencies. But the Australian government said no combination of security controls sufficiently mitigated the risk.

5G networks will start commercial services in Australia next year.

The Australian Signals Directory began in 1947 as the Defense Signals Bureau and became an independent statutory body with a more public profile on July 1. It is the Australian government agency responsible for foreign signals intelligence, support to military operations, cyber warfare, and information security. /kga