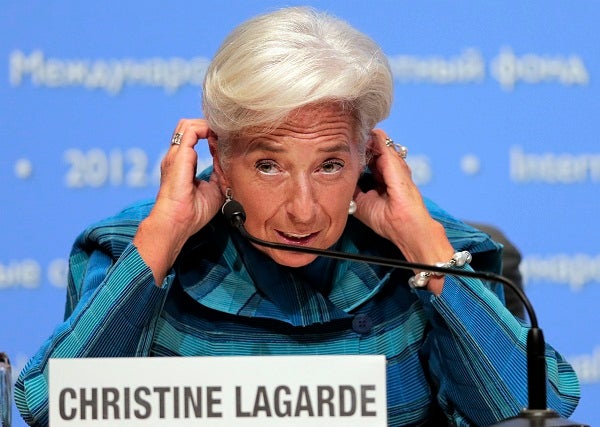 WASHINGTON, United States – An upswing in economic risks due to rising trade tensions and debt levels has prompted the International Monetary Fund to cut its forecast for world growth for this year and next.

With trade growth set to slow sharply amid a trade war between the United States and China, the IMF cut its outlook for global GDP by two-tenths to 3.7 percent for 2018 and 2019, according to the quarterly World Economic Outlook Report issued Monday.

The revised estimates includes a worsening outlook for developing economies this year and next compared to the July report, as well as downgrades for the US and China in 2019.

The IMF warns that risks highlighted in previous reports “have become more pronounced or have partially materialized” in the real world.

The dominant US economy has been shielded from the ill effects so far due to the stimulus provided through tax cuts and spending policies but that will wear off by 2020.

Still, the trade disputes sparked by President Donald Trump that have led to tit-for-tat exchanges of tariffs among major trading partners are affecting China, other Asian economies and more vulnerable countries like Argentina and Turkey, along with Brazil.

Growth estimates for the euro area and Britain also was revised down.

The report warned that growth “may have peaked in some major economies.”

“Downside risks to global growth have risen in the past six months and the potential for upside surprises has receded,” the IMF said.

Rising trade tensions are a key challenge to the world economy as “protectionist rhetoric increasingly turned into action.”

That includes President Donald Trump’s imposition of tariffs on $250 billion in Chinese goods, as well as on aluminum, steel and other products worldwide.

The IMF warned the uncertainty caused by the trade disputes “could lead firms to postpone or forgo capital spending and hence slow down growth in investment and demand.”

And if it continues, the “escalation of trade tensions to an intensity that carries systemic risk is a distinct possibility without policy cooperation.”

Global trade is projected to expand by 4.2 percent this year, six tenths less than expected in July and nearly a full point lower than the forecast in April. For next year, trade is seen growing just four percent, a half point less than the prior forecast.

However, the IMF cautions that it has a “poor track record of predicting recessions.”

The fund urged governments to focus on policies that can share the benefits of growth more widely, helping counter the growing mistrust of institutions, and to avoid “protectionist reactions to structural change.”

And it stressed “cooperative solutions” to help boost continued growth in trade “remain essential to preserve and extend the global expansion.”

But the US tax cuts and rising spending that have boosted growth, helping compensate for the impact of the growing trade conflict, could spark a sudden “inflation surprise,” and in turn lead to faster-than-expected rise in US interest rates, according to the fund.

Already the Federal Reserve interest rates hikes are increasing pressure on emerging market economies by fueling an outflow of capital as investors seek higher returns, while increasing borrowing costs at the same time.

US stimulus also adds to the “already-unsustainable” debt and deficit that will undercut future growth, the report warns.

The trade confrontation weighs on China in particular, where growth is projected to slow to 6.6 percent this year and 6.2 percent in 2019, a downgrade of 0.2 points.

However, stimulus measures by Beijing are likely to soften the impact of the tariffs.

Further out, China’s economy is expected to slow gradually to 5.6 percent as the government shifts to “a more sustainable growth path” and addresses financial risks, the IMF said. /cbb