US advertising firms grapple with ‘Me Too’ 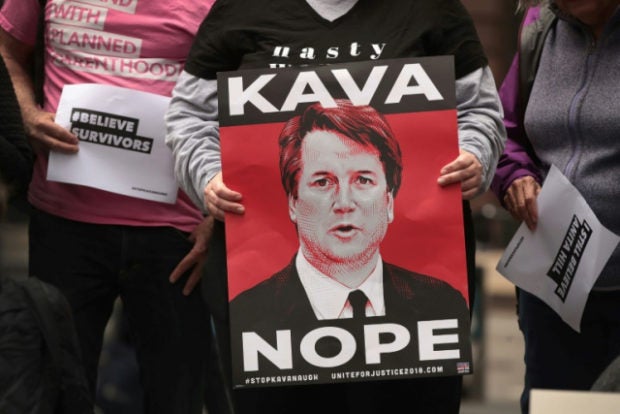 Allegations of sexual misconduct against Brett Kavanaugh came a year into the “Me Too” uprising against harassment and assault. Image: Getty Images North America/Scott Olson via AFP

Some of corporate America’s dirty secrets were aired this week at a conference that overlapped the anniversary of the “Me Too” movement and the contentious debate over Brett Kavanaugh, who was confirmed as the latest Supreme Court justice on Saturday.

An Advertising Week session on human resources veered between confession and crusading.

One speaker described the indignity of being harassed while pregnant. Others discussed soul-crushing details of working on non-disclosure agreements for harassment victims paid off to leave the company and keep quiet.

Advertising — a field that like entertainment sometimes rewards those who push the boundaries — is yet another industry that has seen executives pushed out of major firms following allegations of sexual misconduct.

“There are a lot of ways in which HR has been complicit,” said Rebecca Weaver, cofounder of HR Uprise, an activist group launched over the last year.

“If you’ve ever sent out that email saying ‘so and so has resigned to explore other opportunities,’ you’re lying to your team,” said Weaver, who called for a “reckoning” in HR policies for the longtime good of the industry.

The conference was held as the US reeled over the nomination — and eventual confirmation — of Kavanaugh to a lifetime position on the Supreme Court after several women accused him of sexual assault while in the 1980s.

The Kavanaugh allegations came a year into the “Me Too” uprising spawned by horror stories of Hollywood executive Harvey Weinstein and other serial harassers usually aided by a phalanx of corporate henchmen.

Senior female advertising executives came together earlier this year to form Times Up Advertising to “create equitable and safe cultures within our agencies,” according to a mission statement signed by 180 women.

“Sexual harassment is not OK. Never. No exceptions. No amount of talent, missed cues, or being great in the room unchecks the No Sexual Harassment box,” said the letter. “Time’s up on silence.”

The more anarchic Diet Madison Avenue, an anonymously-run Instagram account, also is pushing for changes in the industry, calling out agencies and alleged individual harassers, leading to some dismissals.

One of those executives, Ralph Watson, denied the allegations and sued Diet Madison Avenue in a California court for defamation after he was dismissed from Crispin Porter & Bogusky.

Lawyers in the case for Watson and Diet Madison Avenue are sparring over whether Instagram should be forced to respond to a subpoena that could unmask the group.

Industry officials say they are rethinking workplace policies, including teaching bystanders to speak up, and allowing victims to feel safe filing a complaint.

One focus is on “bystander training,” getting employees to call out sexist or racist statements made by colleagues.

In the infamous “Access Hollywood” tape in which Billy Bush laughed as US President Donald Trump made lewd comments about women, “You’re really trying to reach Billy Bush and not Donald Trump,” HR expert Weaver, who works at a Seattle advertising firm, told AFP.

Interpublic Group has used anonymous surveys to try to find trouble spots, and explicitly encouraged people who have suffered harassment to come forward.

The agency hopes employees will no longer feel the need for a “whisper network” in which employees exchange horror stories but nothing is done institutionally, said Heide Gardner, chief diversity and inclusion officer at Interpublic.

“We want to be sure that people feel safe stepping up,” Gardner said in an interview. “I would like to see us shift the tone so that when we come to work we set up everyone for success.”

Other sessions during the conference covered challenges facing women, including non-white or gay women.

Speakers described the frustration of not receiving promotable projects, and called for women to be protagonists in advertising, rather than subservient or sexualized roles.

Another panel explored questions about why white men are usually picked to succeed other white men, and fears among men of being falsely accused of harassment. CC

#Me Too movement sends Hollywood figures into exile, not jail