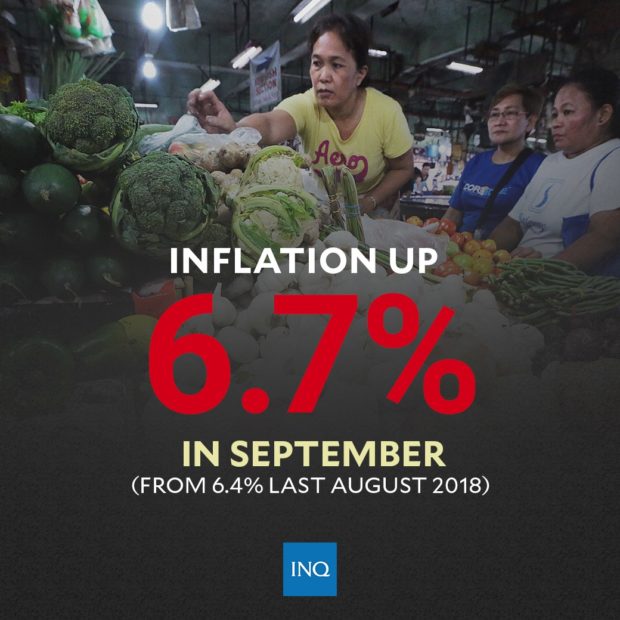 Measures taken by the government to rein in surging consumer prices have begun to make themselves felt as the inflation rate for September, though higher than the previous month’s, came in lower than most analysts’ expectations, the central bank said on Friday.

In a statement to reporters, Bangko Sentral ng Pilipinas Deputy Governor Diwa Guinigundo said the inflation rate could have already peaked, and — “barring unforeseen events”, like the continuation of the surge in international oil prices — may be the start of a decline in the pace of price hikes all the way to 2020.

“Despite the impact of Typhoon Ompong, escalating global oil and food commodity prices, we are beginning to feel the positive impact of various non-monetary measures including accelerated release of NFA rice, higher importation of rice and other food commodities as well as close monitoring and surveillance of market prices against possible profiteering and hoarding,” the BSP officer-in-charge said.

Guinigundo added that initial signs on moderating growth in liquidity and credit “resulting from the appropriate open market operation” of the central bank through its various facilities designed to mop up inflationary idle cash from the financial system are starting to emerge.

In a separate statement, the central bank said the implementation of non-monetary measures, particularly the approval of rice tarrification along with additional importation of rice and other food items, “could lead to an earlier return of inflation to within the target range in 2019.”

On Friday, the government reported that inflation rose 6.7 percent year-on-year in September, its highest in over nine years, but lower than most analysts’ expectations, some of whom were expecting the consumer price index to breach 7 percent for the month.

The rate of increase in prices of basic commodities last month was the fastest since the headline inflation rate of 7.2 percent in posted in February 2009.

Guinigundo pointed out that the September 2018 inflation rate turned out lower than the BSP’s midpoint forecast of 6.8 percent, though still within the range of 6.3-7.1 percent.

In an email to reporters, ING Bank economist Nicholas Mapa echoed hopes that the local economy may have already seen the worst of the relentless price increases that began in January.

“The 6.7 percent [rate] supports our assessment that inflation is close to or has peaked for the year and is expected to taper off going into the year end,” he said. “The Philippines will benefit from favorable base effects going into December.”

Mapa explained that rice imports have already arrived in ports and are presently being distributed with up to 750,000 metric tons seen to arrive in the coming weeks to help alleviate pressures further.

“We hope further non-monetary policy measures begin to take root ahead of the Christmas season,” the ING economists said. “On risks to the upside, oil prices remain elevated, which has been reflected in the recent prices increases at the pump.”

In a separate reply to Bloomberg News, Guinigundo adopted a more hawkish tone when asked about the central bank’s monetary policy stance going forward in the light of the latest inflation rate.

“In general, the BSP will remain vigilant with strong tightening bias until such time that we are certain inflation can be sustained within the target range of 2-4 percent for 2019 and 2020,” he said, but added that monetary planners will wait for additional market data before it decides whether to hike interest rates further to head off so-called demand-side inflation.

On its impact on monetary policy, it is too early to comment on the next move of the BSP. We shall await data on domestic demand, supply conditions, liquidity and credit and of course the actual inflation for October to process them into an integrated view on inflation outlook and appropriate policy stance.