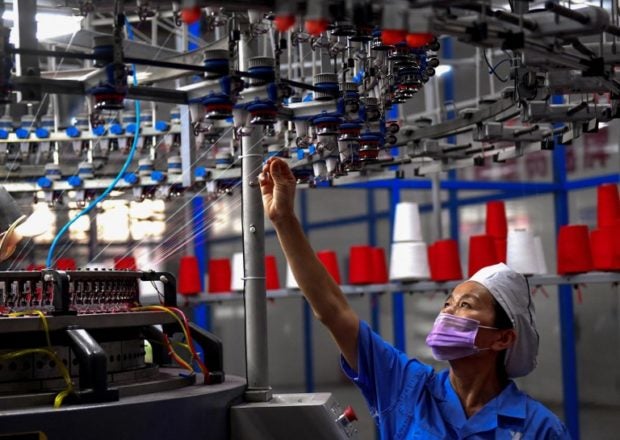 This file picture taken on September 8, 2018 shows an employee monitoring a circular weaving machine at a textile factory in Shangqiu in China’s central Henan province. AFP

The Purchasing Managers’ Index (PMI), a key gauge of factory conditions, came in at 50.8 for the month, down from 51.3 in August, the National Bureau of Statistics said.

The figure was below the 51.2 reading tipped in a Bloomberg News survey of economists.

Although the numbers indicated a slowdown, they remained above the 50-point mark that separates expansion from contraction.

US President Donald Trump last week imposed a further $200 billion in tariffs on Chinese goods and vowed to press on until Beijing buckles.

His latest volley against China, which retaliated with more levies of its own, brings the amount of goods hit by duties to more than $250 billion, roughly half of China’s US exports.

A brighter outlook could be found away from China’s factories, however, with an official gauge of non-manufacturing activity showing the sector expanding to 54.9 in September from 54.2 in August. /ee