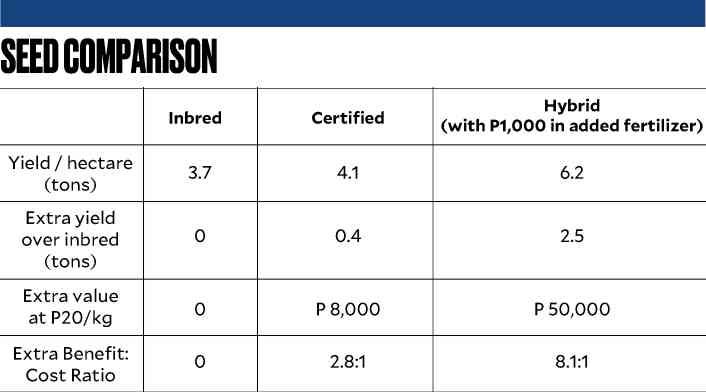 To address our acute rice shortage and high prices, spending on hybrid rice is much more cost effective than building new irrigation. An investment of an additional P12 for hybrid rice seeds in two hectares will yield five tons more palay than spending P900,000 for new irrigation in one hectare.

The official numbers in the table below were provided by Francisco Malabanan. He was the Department of Agriculture (DA) rice program coordinator in 2002. He worked with me then as agriculture undersecretary for operations. That year, the certified rice seed budget was reduced to P400 million from P600 million.

Instead of the expected consequence of reduced performance, we were able to more than double the usage results from 700,000 to 1.5 million hectares, thus significantly increasing the palay yield of the inbred (also known as farmer-sourced) seed variety. This was done through strict management, frequent monitoring and innovative motivation. At that time, hybrid seeds were still in the initial stage of promotion and were used in 10,000 hectares of land.

Since then, Malabanan has joined the private sector and has shifted his emphasis to hybrid seeds. The numbers in the table below show why.

Today, the government states we are 96-percent self-sufficient in rice.  Assuming an individual consumes 114 kilos, multiply this by 105 million Filipinos, thus we lack 479,000 tons of rice (although we import more than 1 million tons per year).

Today, only 600,000 hectares (or only 13 percent) are allotted to hybrid seeds. If we allocate 1 million hectares more for hybrid seeds, this would result in 2.5 million extra tons of palay (or conservatively 1.6 million extra tons of rice). Assuming there is an investment (government subsidy and attractive loan packages)  for this extra effort, this would mean an extra P6 billion for the first year of implementation. Note that the irrigation budget for 2018 is more than P40 billion, compared to none for hybrid rice.

We must promote both hybrid rice and irrigation. But considering the cost-effectiveness of hybrid rice, it is imperative that our government should give it much more support.

On irrigation, the government should also focus on the more cost-effective high-value crops, which can easily yield at least an additional P100,000 per hectare.

The question here is whether hybrid can yield 2.7 tons more versus inbred rice seeds. In Nueva Ecija, where average rice production is at its highest, the 2017  data show the average yield per hectare from hybrid seeds  is 7.5 tons. This is 3.5-tons higher than the 4-ton average yield of nonhybrid seeds.

Several countries are even importing our own hybrid rice seeds. It is time that our government provides our farmers  the same support. This way, we can effectively address our acute rice shortage and high rice prices.