CHIBA, Japan — The games industry at home and abroad is putting efforts into electronic sports, or eSports, which involves competitive video gaming. The market for eSports is expected to grow rapidly worldwide going forward, and many companies are focusing on eSports as a new business.

On the stage, a soccer game called “FIFA 18” that was developed by a U.S. company was being played. The players had signed professional contracts with professional soccer teams such as the J.League’s Urawa Red Diamonds and a Netherlands team. They played the video game while wearing the relevant teams’ uniforms. Many eSports competitions offering prize money are being held around the globe for purposes such as making certain sports teams known. 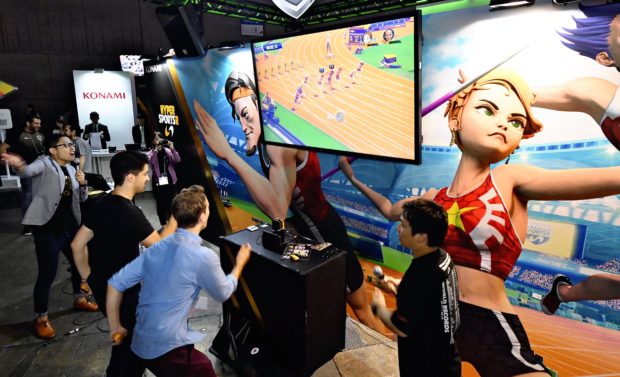 At this year’s Tokyo Game Show, a record-high 668 companies and organizations are participating as exhibitors, with many of their displays relating to eSports.

A lot of companies are taking part in the show for the first time, including a maker of personal computers exclusively for video games, and another that sells chairs to support players so that they will not get tired while gaming.

According to the Internal Affairs and Communications Ministry, the global eSports market, including the sales of games and revenues from eSports events, is expected to increase to ¥176.5 billion by 2021. There are many fans who watch such events on video streaming sites, as well as those who go to actual venues — a total of 335 million people viewed such events across the world in 2017.

According to a survey by “Famitsu,” which publishes various media about gaming, in July this year, 41.1 percent of respondents said they know about eSports, up about 27 percentage points from the previous survey conducted in September last year.

However, the idea of “seeing games as sports” is not very widespread in Japan, so the domestic eSports market is unlikely to reach even ¥500 million in 2017.