Electric vehicles on the fast track in Thailand 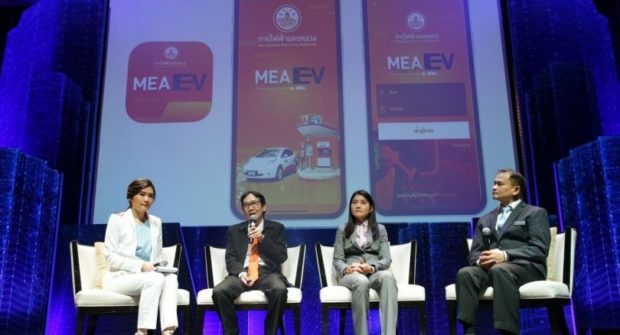 Amonrat Kaewpradap, second from right and Jumpote Himacharoen, second from left. speak at a panel discussion on “The future of Electric Vehicle in Thailand.”

BANGKOK— Experts see bright prospects for electric vehicles (EV) in Thailand with all concerned agencies pursuing the government’s goal of getting 1.2 million units on the road by 2036.

There are many reasons and data behind the confidence of success, a seminar was told yesterday. The rising number of registered EVs, the development of a locally made EVs, as well as research and development of some EV parts are indications that it could have a major role in Thai society, said Amonrat Kaewpradap, a committee member of the Electric Vehicle Association of Thailand (EVAT), at a panel discussion yesterday titled “The future of Electric Vehicle in Thailand”.

The discussion was held as part of the Delta Future Industry Summit, organised by Delta Electronics (Thailand), as a venue for exchanging innovative ideas for a sustainable future.

Amornrat said the number of EVs in use in Thailand was gradually increasing, leading to the continuous growth of infrastructure of charging stations.

“More stations will boost the confidence for consumers in using EVs and so far, there are 500 charging stations in the country, she said. In 2016, there were 80,194 registrations but the number surged to 102,700 in 2017, or an increase of 20,000 units.She pointed out that the accumulated number of EV registrations in Thailand for Battery Electric Vehicles [BEV] and Plug-in Hybrid Electric Vehicles (PHEV) sharply increased from 2016 to 2017.Incentives will bring down priceAnother indication is the higher imports of EVs, she said, adding that more BEV motorcycles were sold these days, pointing to its popularity. 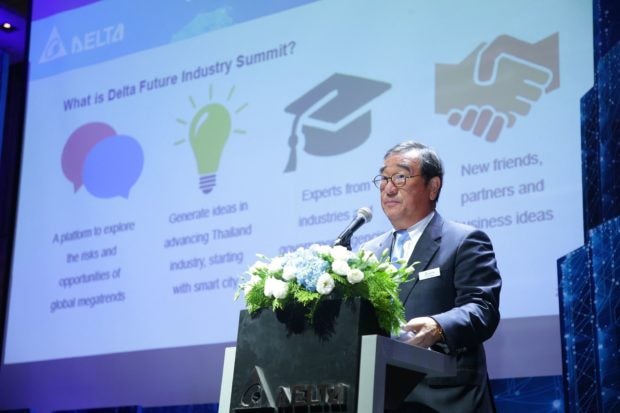 Moreover, EV manufacturers are hiking production amid increasing demand from buyers. Also, educational institutions have launched development projects for EV battery, motors and the structure of a light-weight car.She believes the price of EVs could come down in the future as the government will support its usage with incentives.

Jumpote Himacharoen, director of research and development, Metropolitan Electricity Authority [MEA], said the power agency would provide sufficient electricity to serve the targeted number of EVs. MEA has recently launched an online application on the locations of EV charging stations for the convenience of drivers.

In a separate panel discussion titled “A Decade into the Future: Predictions for Thai Cities”, participants said smart cities would be the cornerstone of the country’s future urban landscape, with significant investment from the government and private sector.

Pansak Siriruchatapong, the vice minister of the Ministry of Digital Economy and Society, said the government would expand its smart city project to three more provinces – Chon Buri, Rayong and Chaochengsao – on the Eastern Economic Corridor this year.Currently, Phuket, Chiang Mai, Khon Kaen and Bangkok are the cities earmarked for the pilot program.

“Within the next five years, Thailand will develop smart cities in all 77 provinces,” he said.He added the two factors driving the development of smart cities are the engagement of community and local government and the connectivity and sharing information with technology solutions.However, Piyapan Tayanithi, Bangkok Bank’s executive vice president, warned that smart or high-technology is a double-edged sword, and back-up measures were needed in the event of malfunctions.

Piyapan cited an incident late last month when banks’ electronic money transfers, withdrawals and payment services crashed for several hours. The banks attributed the cause to heavy interbank money transfers at the end of the month at large banks.“Simplicity or convenience of a group of people could come along with difficulty or complexity for another group [of people],” he said.

Hsieh Shen-yen, president of Delta Electronics (Thailand), said: “We are currently witnessing the decline of old technologies such as gasoline cars and the gradual shift to smarter, cleaner technologies to power our lives and manage our cities.“But the shift to the future will only gain real momentum when the public and private sectors work together and get serious about action for climate change and managing urbanization,” he said.