China imposes retaliatory tariffs on $60bn in US goods 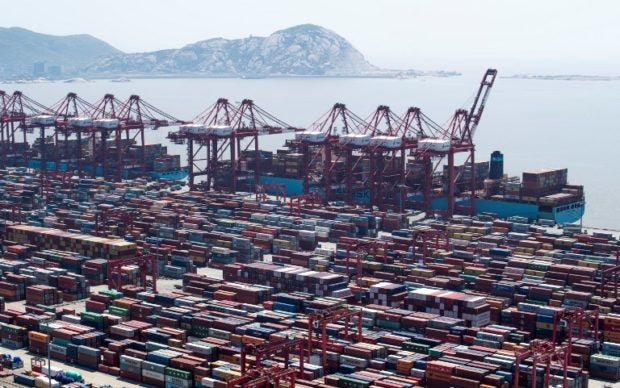 A general view of the Yangshan Deep-Water Port, an automated cargo wharf, in Shanghai on April 9, 2018. China announced on Tuesday, Sept. 18, 2018, tariffs on US goods worth $60 billion in retaliation for President Donald Trump’s decision to slap duties on $200 billion in Chinese products next week. AFP

BEIJING, China – China Tuesday announced tariffs on US goods worth $60 billion in retaliation for President Donald Trump’s decision to slap duties on $200 billion in Chinese products next week.

Tariffs of between five and 10 percent will take effect on some 5,200 US products on Monday, on the same day as the new US duties, the finance ministry said.

The two sides already traded tariff salvos on $50 billion in goods from each country in the summer.

“If the United States insists on raising tariffs even more, China will respond accordingly,” the finance ministry said in a statement.

China also announced that it was lodging a new complaint at the World Trade Organization in its tariffs battle with the United States.

Beijing had previously warned that it would target $60 billion in US goods if Trump made good on his threat to impose the new tariffs.

The lower Chinese figure highlights Beijing’s inability to match the US dollar-for-dollar in a tariffs war.

The US imported around $500 billion worth of products from China last year, compared to $130 billion in US goods imported by the Asian country.

The Chinese finance ministry did not provide a detailed list of products to be hit by the new tariffs on Monday.

A preliminary list in August said products ranging from pig hides to cocoa butter and condoms would be targeted with tariffs of five to 25 percent. It was unclear if the tariffs announced on Tuesday were lower to match the US plan.

The US said the Chinese imports will face 10 percent tariffs through the end of the year, and then the rate will jump to 25 percent. /cbb