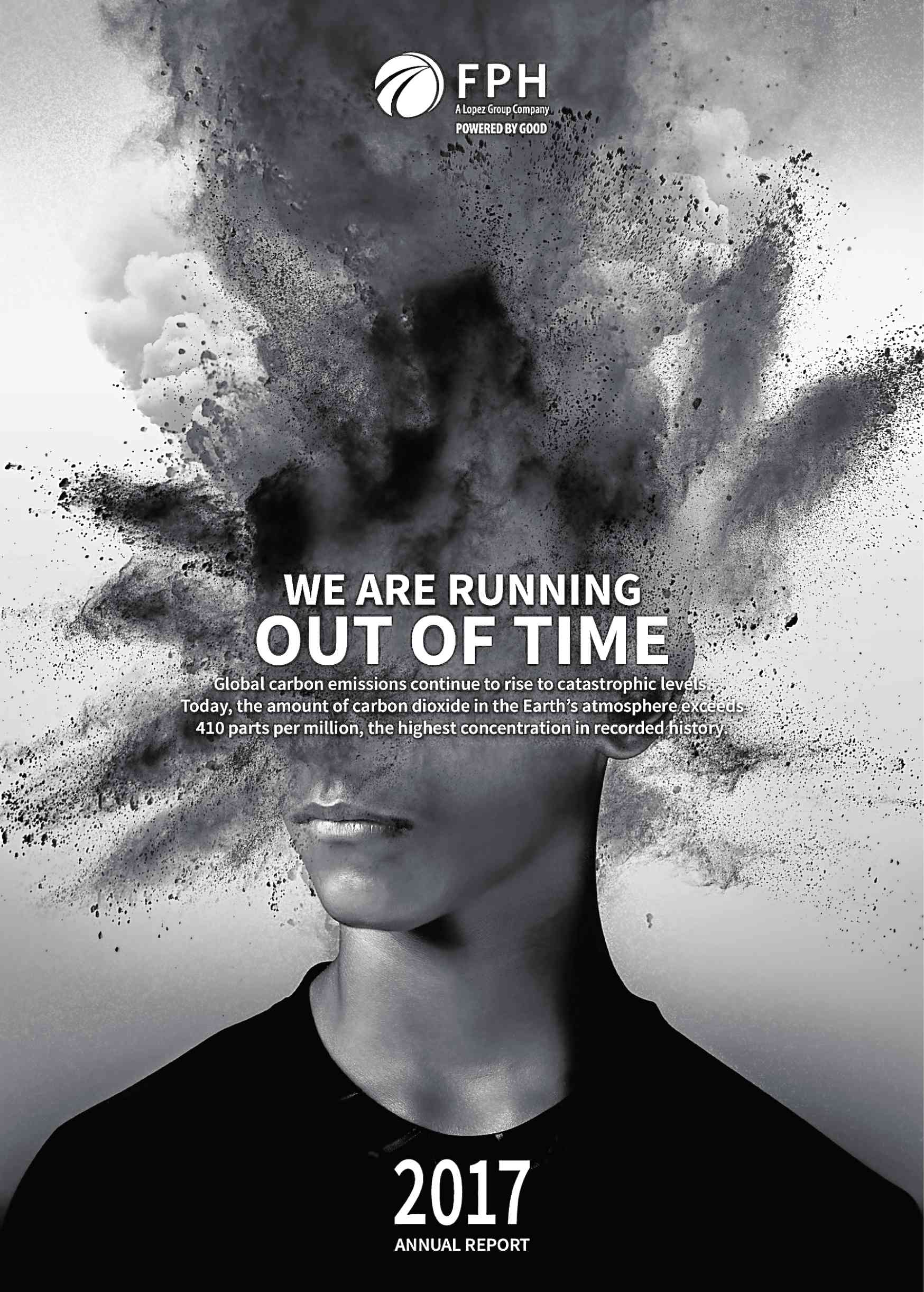 Annual reports of publicly listed companies serve as handy tools for investors to examine their financial health and operations.

It comes as no surprise, therefore, that all three Lopez Group PLCs tap their annual reports to create public awareness about the dangers of coal as fuel for power plants.

In explaining their choice of clean and renewable energy, these annual reports cite scientific studies to warn readers about the risks from using coal—a fuel blamed for a wide range of health issues and adverse weather patterns associated with climate change, such as floods, droughts, as well as more destructive and more frequent typhoons.

But these messages are placed inside the annual reports. So, for their latest annual reports, the three Lopez Group companies went one step further and—instead of keeping their advocacies inside—brought them out and into the covers of their annual reports.

“We broke the traditional mold of our corporate annual report front pages to drive the point home even more about the risks from climate change,” says FPH CEO Federico R. Lopez.  “The catastrophic effects of climate change are here, and it’s affecting the very people we love and the communities we serve.  The dangers are upon us and the urgency is more than immediate. We need to act quickly while there is still time.” 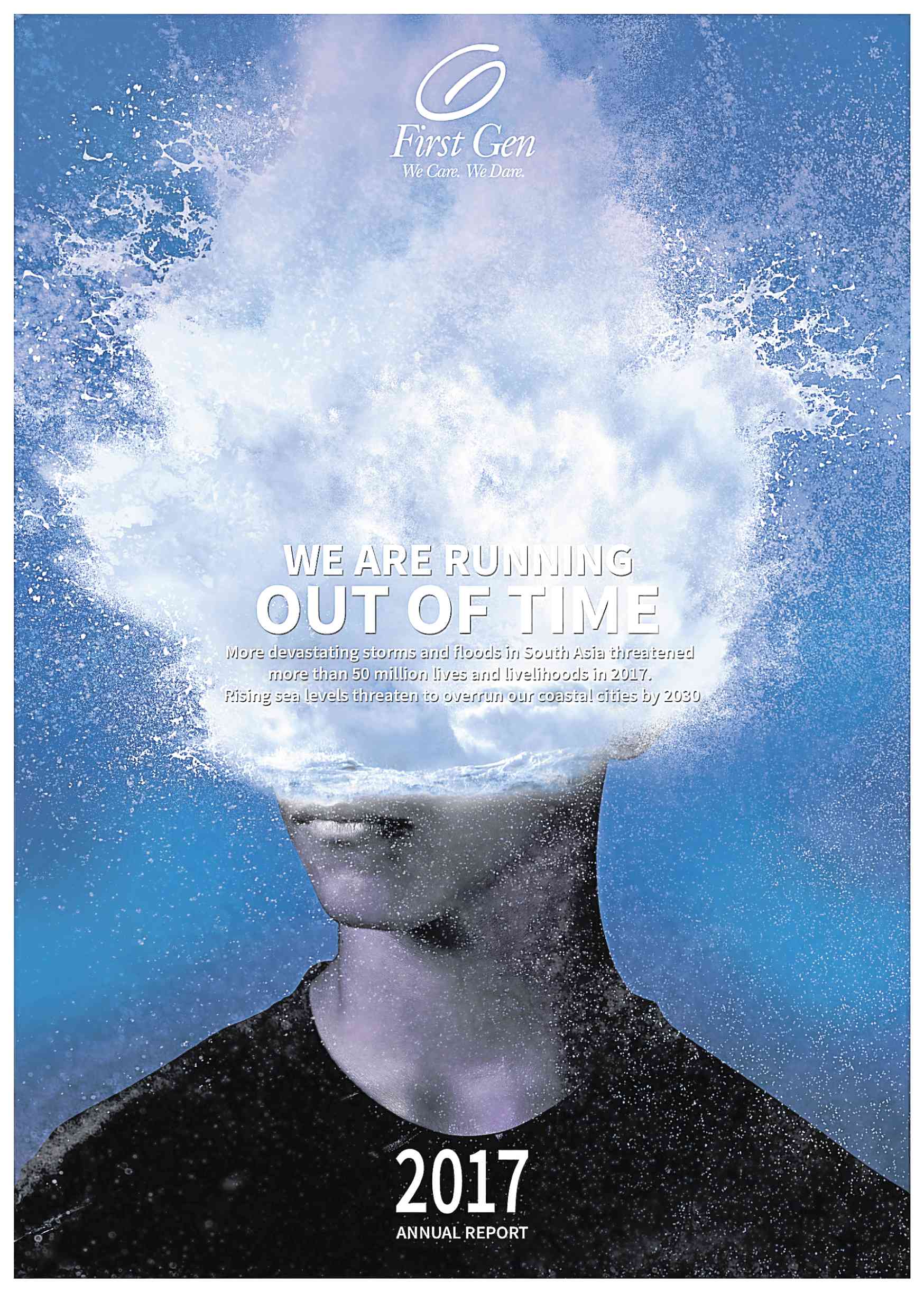 The annual report front covers, all titled “We Are Running out of Time,” use a dramatic—some would say, shocking—approach to communicate the magnitude of the problem of climate change.  They share a common image—a man’s head—combined with another element that varies in all three covers.

For the EDC cover, a raging fire hides the upper portion of the man’s head to convey the dangers, such as wildfires, which go with climate change and an overheating Earth.

In the First Gen cover, the upper portion of the same head disappears in an explosion of water to highlight disastrous floods and rising sea levels—dangers that come with climate change.

For the FPH cover, toxic fumes wrap the same head to stress the alarming levels of carbon emissions in the atmosphere.

FPH and First Gen President Giles Puno said that the choice of covers reflects the Lopez Group’s worry about the general lack of concern regarding the problem of climate change.

“[I]t bothers me that many of us today in positions of leadership, authority and influence in business and in government are denying that our home is burning and going on with ‘business as usual’ … We cannot keep on pretending that our house isn’t burning. It is for this reason that we emphasize the theme of this year’s annual report. We collectively need to increase awareness and keep the pressure up to address this urgent concern. We are in fact, running out of time,” Puno stressed.

EDC President Richard Tantoco further pointed out that “[w]e choose provocative and visceral images to tackle the urgent and challenging issues for our reports. We believe it is our role and responsibility to communicate in ways that will not only capture people’s attention and imagination, but also motivate us all to act and make the right choices.” —CONTRIBUTED 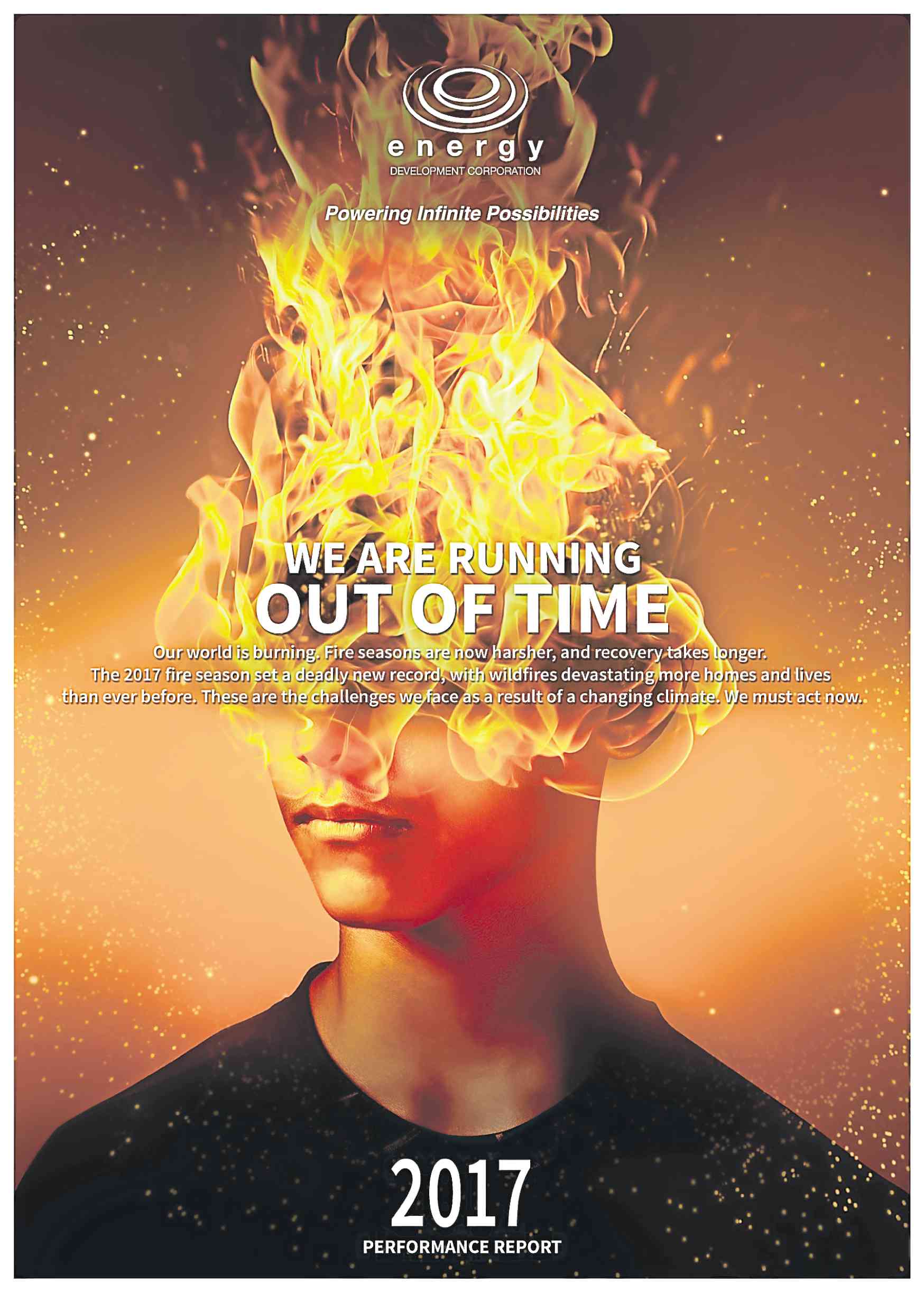 Read Next
S. Korea’s job situation at its worst since post-financial crisis period
EDITORS' PICK
Sotto: Duterte could get terror bill next week
Smart launches new LTE-Advanced Pocket WiFi Plans starting at P699 per month
In speaking out, young athletes prove they are more than just the sum of their skills
Cherry Mobile teams up with Cloud Panda PH, launches online store
DOH: Presymptomatic infection possible
COOCAA TV Bounce Back Sale offers up to 50% off
MOST READ
Sotto: Duterte could get Anti-Terrorism Bill next week
Something about KC that worries mom Sharon
Kim Chiu’s viral dance video has no violations, MMDA agrees
Baguio City to visitors: Follow strict border protocols
Don't miss out on the latest news and information.