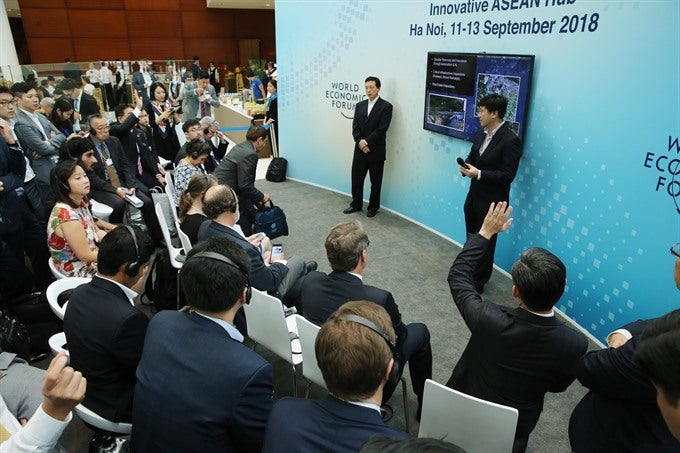 A discussion on self-driving vehicles was held on Wednesday under the framework of the ongoing World Economic Forum on ASEAN 2018 in Hà Nội. — VNA/VNS Photo Lâm Khánh

HÀ NỘI – Innovations in Artificial Intelligence (AI) technology, coupled with its increased adoption, will have a big impact on the workforce across the Association of Southeast Asian Nations (Asean) over the next decade, according to a new study by Cisco and Oxford Economics.

Titled “Technology and the Future of Asean Jobs”, the study claims innovations in digital technology will present big opportunities for Asean economies to boost their productivity and prosperity.

A more widespread adoption of existing technologies, coupled with advances in the use of AI through software, hardware and robotics, will cut costs of goods and services, driving demand and creating millions of new jobs.

The study predicts that the sectors that will see the greatest rise in demand for new workers are wholesale and retail (1.8 million new jobs), manufacturing (0.9 million), construction (0.9 million) and transport (0.7 million).

However, there will be a marked shift in the region’s labor market as lower-skilled jobs are displaced.

“Many skills that we have now will be redundant. The lowest skilled workers will be the most at risk, and the sectors that are most vulnerable are in service and agriculture,” said Naveen Menon, President for Southeast Asia at Cisco.

He added that to achieve the same level of output, Asean’s six largest economies will need 28 million fewer workers.

Singapore could see the biggest relative impact, with up to 21 percent of its workforce displaced. Việt Nam and Thailand are next in line, with 14 percent and 12 percent of jobs displaced, respectively.

The study predicts that over a 10-year period, the competing effects of job displacement and creation will offset each other. However, many of these new jobs are likely to be created in areas different from those where they are being displaced.

As many as 6.6 million workers across the bloc’s six largest economies will have to adapt their skills and forge a new career path to remain productively employed.

The study reveals that 41 percent of those in displaced jobs are “acutely lacking” the IT skills that new jobs will be demanding. Almost 30 percent lack “interactive skills” that will be needed for future job openings, such as negotiation, persuasion and customer service skills.

“This will require all stakeholders – businesses, governments and educators – to work together to ensure the region’s current and future workforce are picking up skills that go beyond just technical knowledge. They need skills like problem solving, design and critical thinking, leadership, collaboration, conflict resolution and empathy. In a digital future, where everyone will have access to the same data and information, these skills will be the key differentiator between being employable or not,” Naveen said.

The report suggests a range of training approaches are needed, including greater commitment to on-the-job training, more flexible online courses and work experience schemes to complement or even, in some cases, substitute for a formal school and tertiary education.

“It’s not an exception for Việt Nam. The digital transformation is no long a vision, it has become the reality,” said Lương Lệ Thuỷ Country Manager and General Director, Cisco Vietnam.

The challenge for Việt Nam was that low-cost labor made up the majority of jobs in the country.

“The Government needs to have some solution because this is going to be a really big challenge for the society,” she said.