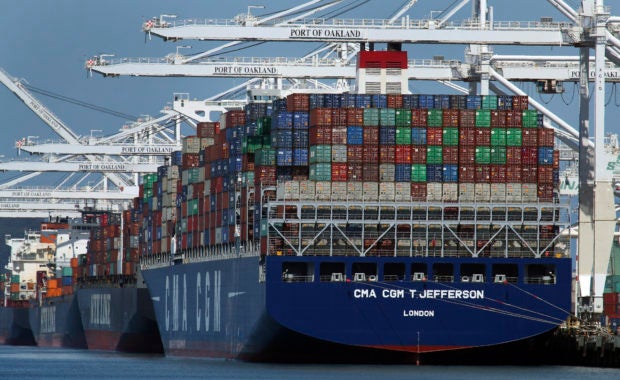 Exports to the United States rose 13.4 percent to $44.4 billion, ticking up from July’s 13.3 percent growth, according to customs data. Imports of U.S. goods rose 11.1 percent to $13.3 billion, decelerating from the previous month’s 11.8 percent.

That could help reignite U.S. demands that Beijing narrow its trade gap, which has temporarily been overshadowed by their clash over complaints China steals or pressures foreign companies to hand over technology.

The two sides have imposed 25 percent tariffs on $50 billion of each other’s goods. The Trump administration is deciding whether to extend penalties to another $200 billion list of Chinese imports. Beijing says it will retaliate.

With no settlement in sight, the spiraling conflict between the two biggest economies has fed fears it will chill global trade and economic growth.

The Commerce Ministry expressed confidence Thursday that China can maintain “steady and healthy” economic growth despite the trade pressure.

On Friday, Trump he was ready to step up pressure by raising tariffs on yet another $267 billion list of Chinese imports. That would mean penalties cover almost all goods from China sold to the United States.

Chinese leaders have rejected pressure to scale back plans for state-led development of global champions in robotics and other technologies.

Their trading partners complain those violate Beijing’s free-trade commitments and U.S. officials worry they might erode American industrial leadership. But communist leaders see their industry plans as the path to prosperity and global influence.

As tensions mounted, Beijing agreed in May to narrow its trade gap with the United States by purchasing more American soybeans, natural gas and other exports. Chinese leaders scrapped that deal after Trump’s first tariff hikes hit.

Chinese exporters of lower-value goods such as handbags and surgical gloves say U.S. orders have fallen off. But sellers of factory machinery and other more advanced exports express confidence they can keep their U.S. market share.

The Chinese customs agency took the rare step of announcing August trade data on Saturday instead of a working day. That would give financial markets a chance to digest the politically sensitive data before trading opens Monday.

Forecasters had said China’s sales to the United States, its largest national export market, might weaken after manufacturers rushed to fill orders ahead of Trump’s first tariff hike July 6. But trade data have yet to show a significant impact.

The country’s global trade gap was $27.9 billion. That meant that without sales to the U.S. market, China would have run a trade deficit.

China regularly runs deficits with many of its trading partners that supply oil, industrial components and other imports and pays for those by running a surplus with the United States and Europe.