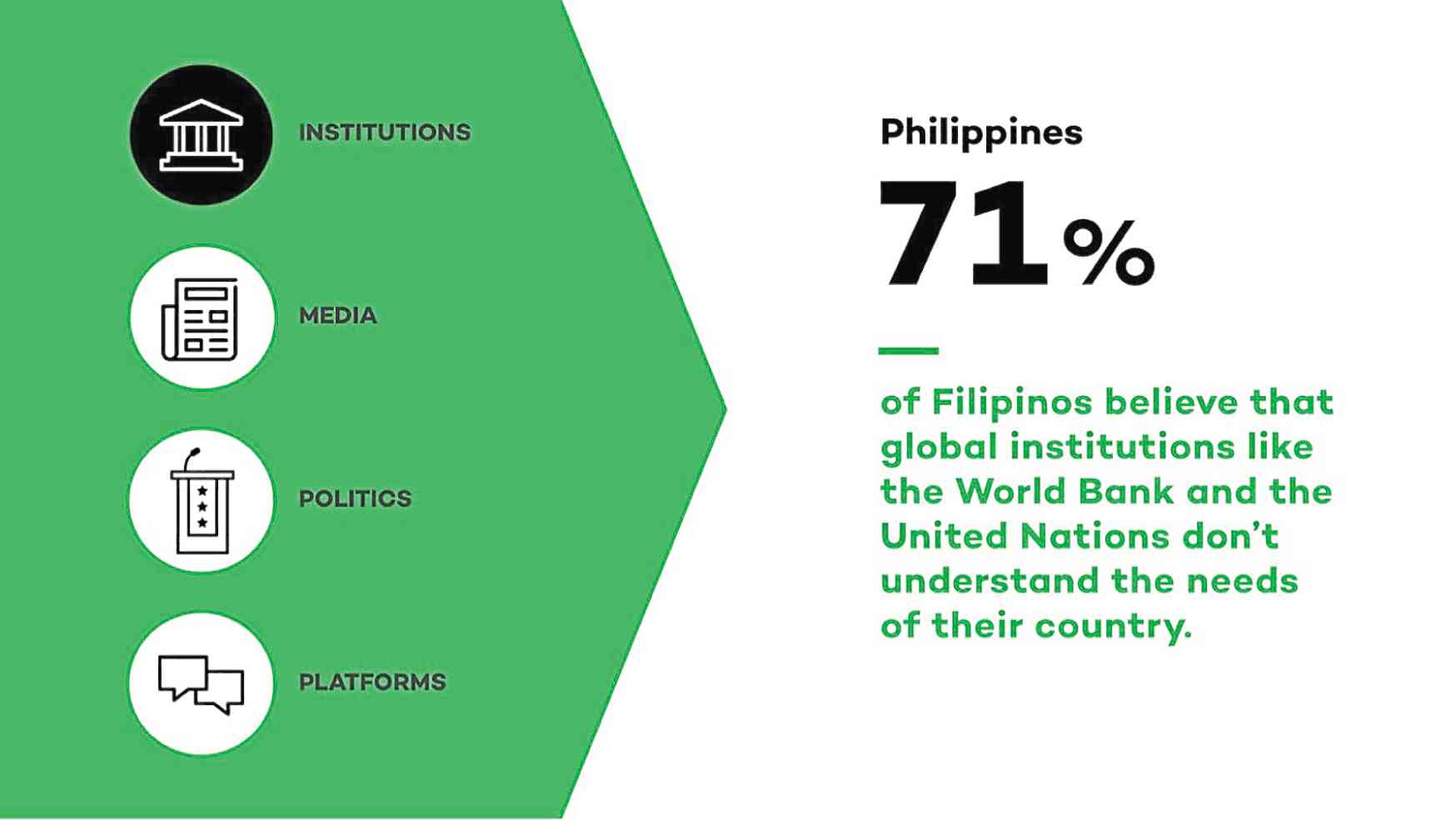 In a world full of doubt, in whom—or what—do Filipinos place their trust?

Apparently, not in government, institutions, nor social media, but brands, says a study by McCann Worldgroup called “The Truth About Global Brands 2: Powered by the Streets.”

The quantitative study surveyed over 24,000 people in 29 countries.

This year’s study, revealed recently by McCann Worldgroup Philippines’ chief strategy officer Gino Borromeo, is a follow-up to the initial one launched in 2015.

It explores four major themes: truth as the world’s most valued currency, the new ordinary, the empathy gap and global brands in a local world.

According to the study, many Filipinos, along with the majority of the study’s respondents, are now questioning everything: 72 percent of global consumers believe institutions like the World Bank and the United Nations don’t understand their country’s needs, a number which isn’t far from findings in the Philippines (71 percent).

As for government, 68 percent of Filipinos believe politicians aren’t as truthful as they were 10 years ago—higher than the global average of 58 percent—and that they don’t understand what it is to be like “ordinary” people.

Social media is now also being reevaluated by consumers, as 77 percent of consumers—both globally and here in the country—believe that it is sowing divisiveness among its users.

On average, respondents said they need to review at least five sources of information (the average here in the Philippines is 3.8) to ensure the veracity of a subject.

Given these factors, the truth, more than ever, has become more important to people, said Borromeo.

Based on the study, 72 percent of people believe the truth should be prioritized above everything else in all situations, up from 61 percent in 2015 (locally, the number rose from 61 to 70 percent).

The silver lining for brands: unlike institutions, government and social media, people’s overall view of them has not been affected by such negativity when it comes to attitudes toward the truth.

Eighty-eight percent of Filipinos have more than double the amount of trust in companies than in politicians, higher than the global average of 81 percent. 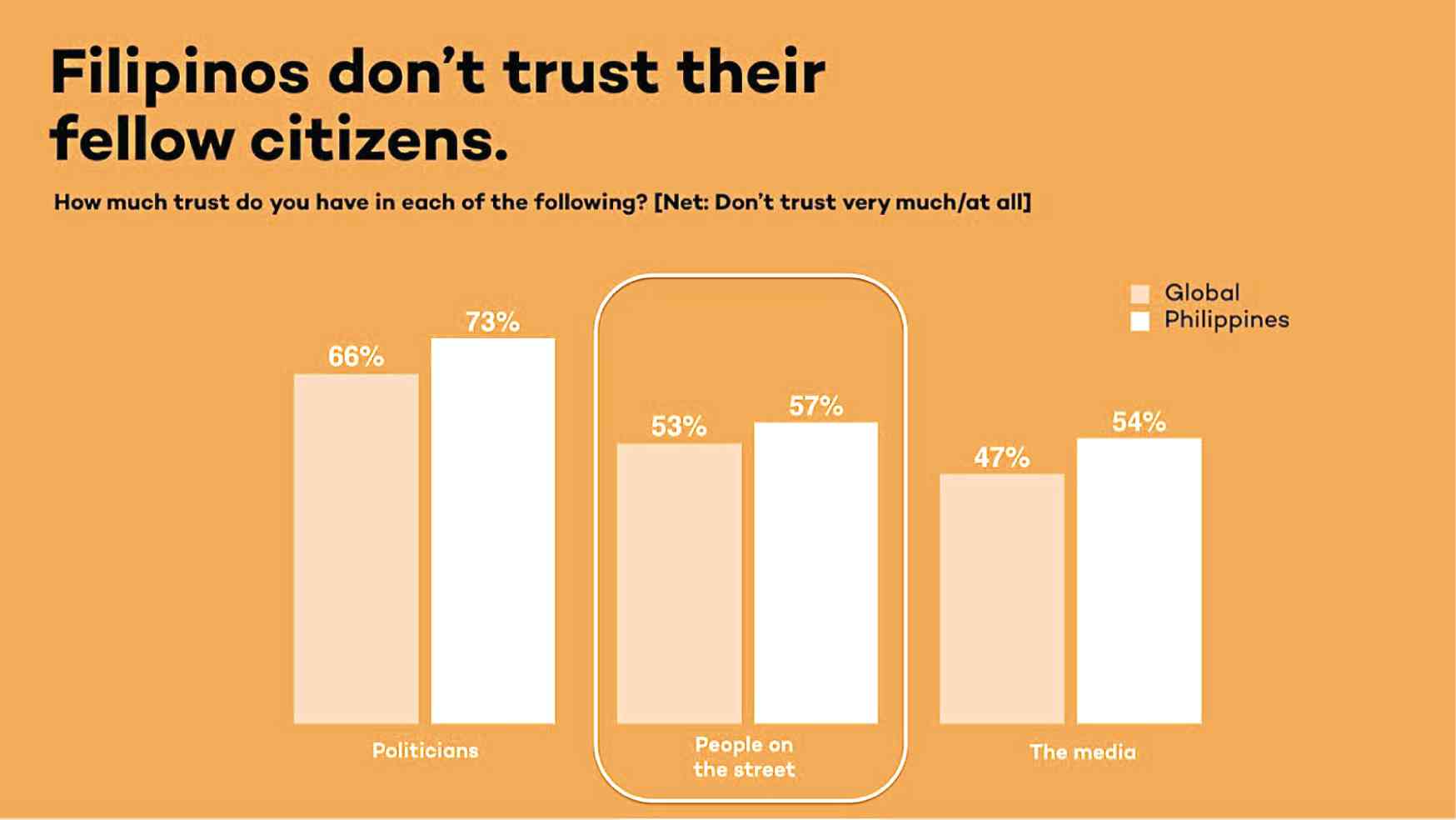 The study also found that people are open to brands playing a broader role in society.

In their minds, brands are supposed to spread laughter and happiness, bring people together by helping eliminate prejudice and encourage people to adopt a healthy lifestyle.

Along with people’s quest for truth and belief that companies are more trustworthy, the study found that local brands now trump global.

However, Filipino consumers’ concept of local isn’t confined to homegrown businesses, but can include foreign ones that have successfully integrated themselves in local culture, Borromeo said.

Again, the study found that this presents another opportunity for companies to engage their customers in a more meaningful way, given that they are already deemed trustworthy by most consumers.

Diversity is another issue that cropped up in McCann’s research, particularly how it has become the new normal for consumers.

According to the study, people’s notion of diversity differs per country; for Filipinos, this relates more to socioeconomic, regional, and religious differences.

Such differences are also divisive and sows distrust among fellow Filipinos, the study states. Brands, therefore, could take the lead in managing diversity by promoting unity.

Distrust and divisiveness leads to another issue: lack of empathy.

Intolerance is on the rise, and the study discovered that 81 percent of Filipinos surveyed focused more on themselves rather than others—the highest number globally.

However, many still reported feeling positive about their personal lives, and consider home as sanctuary.

Brands, maximizing on the trust of consumers, can also be powerful tools in bridging this empathy gap.

After all, said Borromeo, people just want something that will restore their faith in humanity.

Ain’t that the truth?