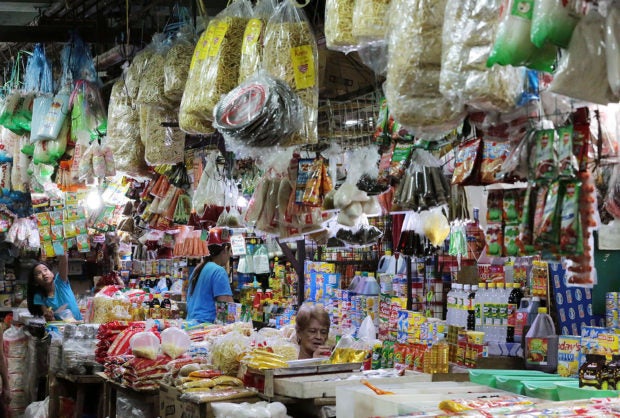 Store keepers wait for customers at stalls selling dry goods in Commonwealth Market in Quezon City on Wednesday, September 5, 2018. The Philippine Statistics Authority (PSA) announced the inflation or the increase in the prices of goods climbed to a 9 year high, hitting 6.4% in August.
INQUIRER PHOTO / GRIG C. MONTEGRANDE

Prices of food—especially rice—as well as “sin” products like cigarettes and alcoholic drinks continued their climb in August, such that the inflation rate surged to an over nine-year high of 6.4 percent year-on-year, risking to slow the country’s economic growth.

The latest Philippine Statistics Authority (PSA) data released Wednesday showed that the rate of increase in prices of basic goods and services last month jumped at its fastest pace since the 6.6 percent posted in March 2009.

Headline inflation in August was also higher than estimates of government and private sector economists, who had projected the rate to fall within the range of 5.5 percent and 6.2 percent at most.

As such, inflation averaged 4.8 percent from January to August, above the government’s 2-4 percent target range.

Besides the higher-than-expected increase in consumer prices, the market also went jittery as the PSA released its August inflation report more than one hour late, releasing it to media past 10 a.m., much later than the 9 a.m. schedule.

The PSA apologized for the delay in releasing the latest inflation report, citing “technical difficulties due to clogged website because of volume of those trying to get into it.”

Headline inflation in Metro Manila was an even higher 7 percent year-on-year in August, while the price increases outside Metro Manila averaged 6.2 percent that month.

As of end-August, inflation in the National Capital Region (NCR) averaged 5.6 percent and 4.6 percent outside NCR.

To recall, the cigarette excise tax further rose to P35 per pack starting July under the Tax Reform for Acceleration and Inclusion (TRAIN) Act.

Last January, the unitary excise tax slapped on cigarettes rose to P32.50 per pack from P30 a pack last year.

Signed by President Rodrigo Duterte last December, the TRAIN Law or Republic Act No. 10963 since Jan. 1 this year jacked up or imposed new excise taxes on cigarettes, sugary drinks, oil products and vehicles, among other goods, to compensate for the restructured personal income tax regime that raised the tax exemption cap.

Economic managers nonetheless said that higher prices of “sin” products was a welcome development as they wanted to reduce the costs to health from those vices.

The food alone index jumped 8.2 percent year-on-year, compared to the 6.8-percent climb a month ago and 3.1 percent a year ago.

“All the food groups registered higher annual increments in August compared with their previous month’s annual rates, except for the corn index in which annual gain slowed down to 12.6 percent during the month,” the PSA said.

In August, prices of furnishing, household equipment and routine maintenance of the house rose 3.5 percent; health and restaurant and miscellaneous goods and services, up 4 percent; and recreation and culture, up 2.4 percent, PSA data showed.

Last July, the DBCC raised its inflation forecast for 2018 to 4-4.5 percent even as it kept the 2-4 percent target.

Diokno said that “there’s always a possibility” that the average inflation rate will breach 5 percent this year.

But when asked if the high inflation environment was a cause for alarm to economic managers, Diokno replied: “No. You have to look at output and then employment. There are some things that we cannot influence like price of oil—that’s world market; that’s not within policy control. And then, of course, the prices of rice and of fish, they’re global. The declining output of fish—think of global warming.”

For the state planning agency National Economic and Development Authority, “a committed effort from agencies in the agriculture sector to boost output and introduce policy reform is needed to bring down prices of agricultural products.”

“The government, particularly the Department of Agriculture, must act quickly and fervently with a sound judgment to ease the increasing prices of agricultural commodities which are the main drivers of inflation,” Socioeconomic Planning Secretary and Neda chief Ernesto M. Pernia said in a statement.

“While the government’s economic team expected inflation to peak in the third quarter before tapering off towards the latter part of the year, inflation in August is largely beyond the median market forecast. That is why we remain steadfast in putting forward measures that will address prices, especially for food,” according to Pernia.

As the southwest monsoon and typhoon “Karding” damaged agricultural production last month, “the rehabilitation of the disaster-stricken agriculture areas must be highly prioritized,” the Neda chief said.

As for the slower production and dwindling stocks of rice, Pernia called on the National Food Authority to “fast-track the distribution of remaining inventories, alongside the completion of the government’s 250,000-metric ton rice imports from Thailand and Vietnam in the last week of August to build its rice inventory, a necessary step to temper inflation.”

Pernia also reiterated that the planned rice tariffication was “a crucial step in reforming the agriculture sector over the medium and long term.”

“This proposed bill, once signed into law and fully implemented, is expected to help bring down the prices of rice and provide farmers better access to farming technologies and high-yielding variety crops,” he said. /jpv