Indian currency decree did little to root out ‘black money’ 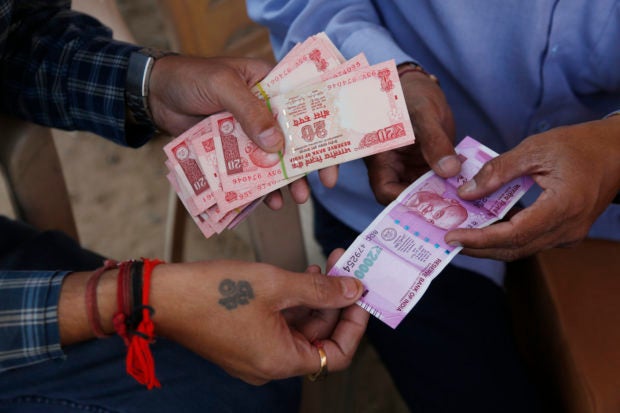 In this Nov. 18, 2016 file photo, men trade buy and sell Indian rupees at a roadside stall set up by Shri Jalaram Gaushala, a shelter for cows, in Ahmadabad, India. India’s central bank says nearly all of the currency removed from circulation in a surprise 2016 attempt to root out illegal hoards of cash came back into the financial system. (AP Photo/Ajit Solanki, File)

NEW DELHI — Nearly all of the currency removed from circulation in a surprise 2016 attempt to root out illegal hoard of cash came back into the financial system, India’s reserve bank has announced, indicating the move did little to slow the underground economy.

Prime Minister Narendra Modi’s currency decree, which was designed to destroy the value of billions of dollars in untaxed cash stockpiles, caused an economic slowdown and months of financial chaos for tens of millions of people.

Modi announced in a TV address in November 2016 that all 500-rupee and 1,000-rupee notes, then worth about $7.50 and $15, would be withdrawn immediately from circulation. The banned notes could be deposited into bank accounts but the government also said it would investigate deposits over 250,000 rupees, or about $3,700. The government eventually released new currency notes worth 500 and 2,000 rupees.

In theory, the decree meant corrupt politicians and businesspeople would suddenly find themselves sitting on billions of dollars in worthless currency, known here as “black money.”

“A few people are spreading corruption for their own benefit,” Modi said in the surprise nighttime speech announcement of the order. “There is a time when you realize that you have to bring some change in society, and this is our time.”

But even as the decree caused turmoil for those in India who have always depended on cash — the poor and middle class, and millions of small traders — the rich found ways around the currency switch. In the months after the decree, businesspeople said that even large amounts of banned currency notes could be traded on the black market, though middlemen charged heavy fees.

The reserve bank report said Wednesday that 99.3 percent of the $217 billion in notes withdrawn from circulation had come back into the economy. Some officials had originally predicted that number could be as low as 60 percent.

“Frankly, I think demonetization was a mistake,” said Gurcharan Das, a writer and the former head of Proctor & Gamble in India. He said that while it did broaden the country’s tax base, it was a nightmare for the immense, cash-dependent informal economy.

“You can’t overnight change that in a country which is poor and illiterate. Therefore, for me it’s not only an economic failure but a moral failure as well,” Das said.