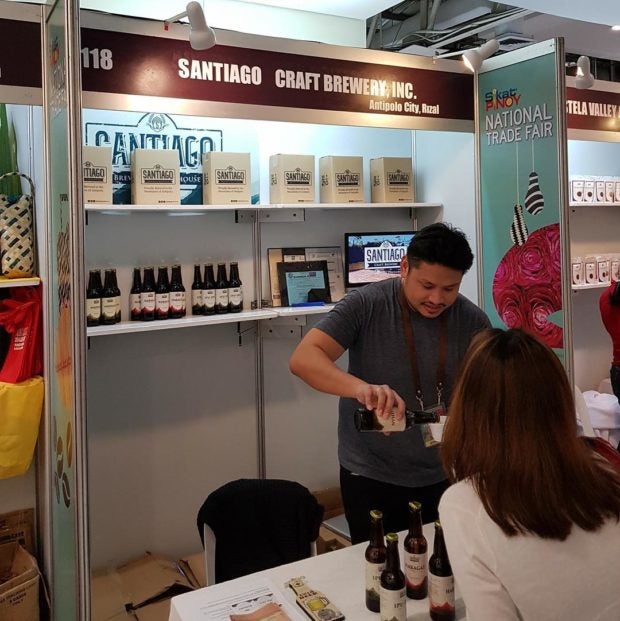 If you are passionate about a hobby, say, brewing beers for fun, will you be brave enough to turn that leisure activity into a business venture? One man dared and that man, consequently, succeeded.

The 2018 Sikat Pinoy – National Trade Fair held on Aug. 22 to 26 at the Megatrade Halls of SM Megamall witnessed the numerous micro, small and medium enterprises (MSMEs) from all over the Philippines proudly showcasing their products for Metro Manila to see. Organized by the Department of Trade and Industry through the Bureau of Domestic Trade Promotion (BDTP), the fair aims to promote awareness of the products produced locally.

One booth, in particular, stood out among its fellow exhibitors. With a flock of interested event-goers gathered in front of the booth, the owner of the venture barely had time to sit down, busy with giving away samples of his products — craft beers (beers made traditionally by small and independent brewers) — to willing attendees, and at the same time answering all sorts of questions they were throwing at him.

A hobby turned into a business

James Gatlabayan, the owner of Santiago Brewery & Malthouse located at Antipolo, Rizal, said that brewing beer started out as a hobby for him. While he had his first taste of craft beer in 2008, it wasn’t until 2014 after going to Baguio Craft Brewery that he learned how easy it was to brew beer. After learning that all the ingredients used in making the alcoholic beverage, except water, were imported, he took it as a challenge to make his own ingredients.

Buying ordinary barley from a feed store, he started the process of malting (converting barley to malt which is used to brew beer) in his bathtub. After two attempts, he finally succeeded, producing a brew with 8 percent alcohol by volume (ABV). He admitted that it was not at par with commercial malt but it was enough to start with.

Gatlabayan proudly says that he is the only brewer who brews with his own malts in the Philippines. He had also expanded his business, malting 300 to 500 kilograms per batch. Focusing primarily on malting and supplying other brewers with malt, he only brewed for his personal consumption.

By 2017, he decided to go commercial. He applied for the Department of Science and Technology’s Small Enterprise Technology Upgrading Program (SETUP) and was given P3 million, which he used to upgrade his equipment.

Life has a way of surprising people. It was the same for Gatlabayan whose family is engaged in politics.

While he studied entrepreneurship in university, he said it was far from what he is doing with his brewery and malt house.

He recounted that he used to do sales and marketing of rescue boats, with no idea that one day he will be turning his love for beer to a successful business.

One challenge he saw with the growing craft beer industry in the Philippines was the lack of diversity flavor-wise. Since other craft brewers import the same malt, the result was that everyone tended to produce the same taste. This is where he says his malting makes his craft beers different.

Gatlabayan said that he had made over 20 types of malts which he has used to make different combinations of beer. He pointed out that fresh malt changes the game in brewing as it changes the flavor of the beer.

As for the name of his brewery, “Santiago” came from the Filipino biblical translation of Gatlabayan’s namesake, St. James. Aside from being the only malt house in the country, Santiago craft beers are known not only for their unique tastes but also known for their signature quirky names.

The name Amihan Blond Ale (derived from the term for the northeast monsoon) was used to label the beer they made in Tanay, Rizal. With 6 percent ABV, it’s light, sweet and refreshing.

Alongside Amihan is Habagat Amber Ale (derived from the term for southwest monsoon) which is made in Antipolo, Rizal. Like Amihan, it has 6 percent ABV with a toasty, malty and moderately bitter flavor.

To complete his theme of wind in his craft beers, Gatlabayan named his other beers Ipu-Ipo (tornado formed on bodies of water) India Pale Ale, and Buhawi (tornado formed on land) Chocolate Cream Stout. Ipu-Ipo is the strongest of his beers, with 8 percent ABV and is very hoppy and bitter with big herbal and citrus flavors. Buhawi, on the other hand, has 6 percent ABV, in roasted sweet chocolate and coffee flavors, with a heavy body and creamy mouth finish.

‘Bringing happiness in a pint’

True to his core vision of “Brewing beer brings happiness in a pint,” Gatlabayan takes pride in brewing what the Filipino market wants. He said that compared to other brewers, it takes his brewery thrice as hard to make beer.

To protect the freshness and full flavor of their beers, Gatlabayan said they don’t pasteurize or filter their beverages. Because they have no control over the distribution channel, their beers only have a shelf life of three months.

They deliver straight to restaurants in Rizal, Cavite and Marikina, and have recently been available online. Sold at around P150 to 200 (suggested retail price), Gatlabayan said that malting reduces their total costs, which in turn renders their beers cheaper than other craft beers.

Gatlabayan noted that being a brewer himself, he has a lot of respect for commercial breweries.

His experience makes him see how difficult it is for commercial breweries to maintain the consistency in their brews, even if their processes are automated.

Another reason he gave as to why he doesn’t regard commercial brews as “piss” was because it was what he grew up drinking.

“You don’t have to break the bank”

Gatlabayan holds workshops wherein he shares about beermaking ingredients, as well as some of his recipes, to prospective brewers.

He gets to teach them how to make beer without spending a lot of money. He recalled how he had a contemporary who spent P150,000 brewing whereas he spent only P7,000. While they both have the same capacity, Gatlabayan was able to brew beer at a much lower cost.

He also has a simple advice to craft brewers starting out: “Stay as small as possible.” JB

Helping other women is the icing on her cake

From fashion to furniture