It is better agriculture loan packaging that can increase the dismal 2-percent share agriculture gets from the total loans provided by our financial institutions. Some say Land Bank of the Philippines acts more like a commercial bank than a government agriculture bank, as only 8 percent of its loans directly go to farmers and fisherfolk. But the key problem is the lack of financially feasible loans submitted by this sector. This is because most farmers and fisherfolk do not know how to package their loan proposals.

This is why we welcome LBP president Alex Buenaventura’s new direction: “Instead of the farmers coming to Land Bank, Land Bank will go to the farmers.” The bank will now help identify, and more importantly, package financially feasible loan proposals. Whenever possible, other banks should do the same as an integral part of their corporate social responsibility (CSR).

The DA’s Philippine Fiber Development Authority (Pfida) has a good abaca road map. But it has been unsuccessful in getting funds to implement the road map’s flagships project. Pfida director Kennedy Costales said LBP had rejected its abaca flagship loan proposal because it didn’t have track record. However, the problem was also the loan’s defective packaging.
The latest production numbers provided in the abaca road map showed a dismal 0.1 percent growth rate a year from 66,471 metric tons in 2006 to 67,329 in 2015. Given the 5-7 percent global demand for environment-friendly abaca, the numbers below packaged in a different way showed a compelling argument for approving the abaca loan proposal. 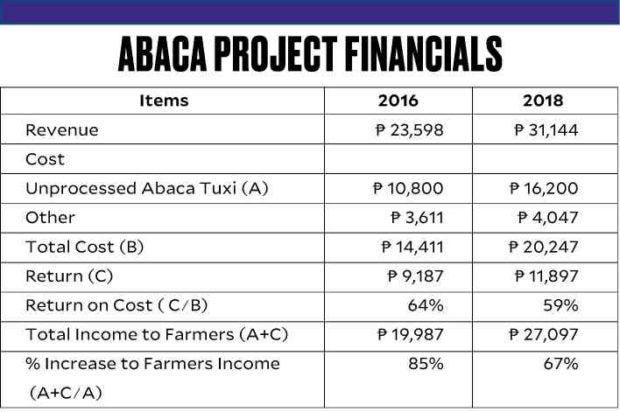 In the table, we compared the 2017 numbers with 2018 data. We also showed the previously unclear high return on cost (64 percent and 59 percent) and included additional costs that were previously ignored. Examples are paying for the amortization of assets and provision for retained earnings, as suggested by MAP- Agribusiness Countryside Development Foundation’s Ramon Ilusorio on July 10.

Another important item previously not presented was the increase in the farmer’s annual income by 85 percent and 67 percent under two different scenarios. This was computed using half of the farmers current daily labor hours.

The abaca road map was done solely and admirably with Pfida’s in-house expertise. However, Costales agreed that it would be helpful for an outside team of additional experts to provide possibly missing information, insights, and packaging expertise (especially in the financing area). As the committee chair of the Philippine Chamber of Commerce and Industry (PCCI) for road maps, I have observed that industry road maps, much more than agriculture road maps, extensively use outside consultants. The DA and DTI should encourage external expertise, as well as more coordination and synergy between agriculture and industry road maps. This way, a unified agri industrial strategy can be packaged better for approval by our decision makers.

Costales’ approach for abaca includes three steps. First, he surveys the current situation and identifies the main bottlenecks. These are the lack of mechanization and the abaca farmer’s low income. Second, he develops with stakeholder involvement the solution to these bottlenecks. In a recent meeting, Buenaventura said he was impressed with the project proposal increasing the farmer’s income by four times. For half the farmer’s labor time, he gets practically double the value of his production through mechanization. Third, this project proposal should be packaged in financially feasible terms. With help from external sources such as Land Bank, this can now succeed.

Costales’ three step approach should be replicated for other agriculture products. This will result in more agriculture loan availment and faster agriculture development.