AP Cargo boss: From doctor to janitor to winning businessman

Who would have imagined that the man behind one of the Philippines’ largest logistics companies — AP Cargo — is a medical doctor?

More than that, who would have thought that this surgeon had to work as a school janitor abroad before he could build AP Cargo?

Dr. Virgilio Villacorte had been a surgeon at the José R. Reyes Memorial Medical Center during Martial Law years in the 1970s.

It had not been easy for him to complete his medical studies as their father had died early, leaving their mother alone to raise six children.

“Being a physician does not mean that you will get rich. Our only consolation is that we won’t go hungry,” Villacorte said.

With limited opportunities for him in the Philippines during Martial Law, he grabbed the opportunity to live and work in Australia.

It was in Australia that Villacorte married his wife Teresita, a doctor and a classmate in medical school in the Philippines. They have two sons: Vincent and Virgil.

Unfortunately, being a janitor was the only job he could find in Australia. He said he was “doing not a medical job in a medical hospital but doing school jobs, 18 hours to 19 hours a day, not as a school doctor but a school janitor for an entire six years.”

Years later, their fortunes turned and they started establishing family businesses. They returned to the Philippines in 1991 when they inherited his mother-in-law’s business, MBS Trading, a simple company that pioneered air-shipping in the country.

MBS became the seed of AP Cargo that Villacorte managed to develop using the $6,000 he was able to set aside from earnings he had while working in Australia.

“Being a doctor and naïve in business, I didn’t realize that my fate would boil down to having a logistics company, something that I had barely imagined in my life,” Villacorte said during a press conference on Thursday to mark the signing of a multi-million dollar software deal between AP Cargo and Ramco, an international software provider.

AP Cargo currently has 80 branches nationwide but the company hopes to grow this to 100 branches by the year 2020.

The AP Group of Companies transitioned into the AP Cargo Logistics Network in 2001 and the company has been one of the Philippines’ top 7000 corporations since 2010.

Asked by INQUIRER.net about the secret of his business success, Villacorte mentioned three things: hard work, faith, and trust.

“Faith is something that you cannot see but the reward for it is to see what you believe,” he said.

(Do not doubt your faith and do not believe your doubts.)

As for trust, he said: “If I don’t trust the people around me, how I can work with them?” 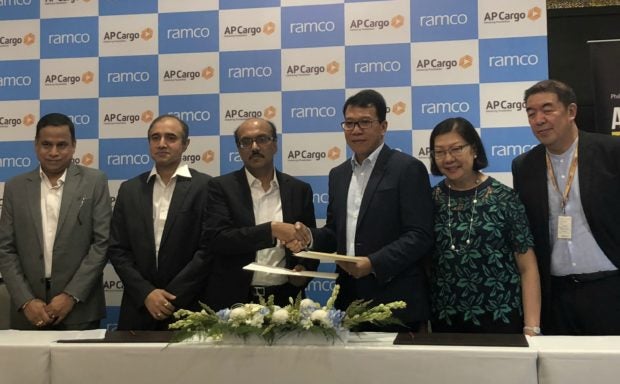 Villacorte said, “Running a family business is the hardest part,” he said, admitting that a rift sometimes comes between him and his wife and two sons, “especially in minor or even big decisions.”

As AP Cargo grew quickly, Villacorte admitted that their “antiquated system” was unable to catch up.

He mentioned how his eldest son Vincent often complained about their so-called “IBM System” – their term for “It’s Better Manual” system.

“He keeps on saying that we are still in the Stone Age,” Villacorte said.

He admitted that his two sons were right in pushing for the digitization of their business.

“All the while, I thought I would always win in the battle in the company but I had to surrender and give in to their demands,” he noted.

Both AP Cargo and Ramco Systems declined to reveal the cost of converting the logistics provider’s data into digital format.

They only hinted during the press conference that the digital transformation of AP Cargo’s logistics and shipping operations would run into the “multi-million dollar” figure.

Vincent, who is AP Cargo’s Vice President for Business Operations, said: “The decision to automate our manual systems with a future-ready logistics suite is part of a larger strategy to overhaul our supply chain.”

Ramco is the provider of an award-winning enterprise software on cloud, mobile, and tablets.

Virender Aggarwal, Ramco’s CEO, said their company’s edge over other software firms is that their system is “unified” – meaning only a single software system could address their clients’ various needs.

“Logistics is the backbone of global trade and the Philippines has enjoyed remarkable growth in recent times,” Aggarwal said.