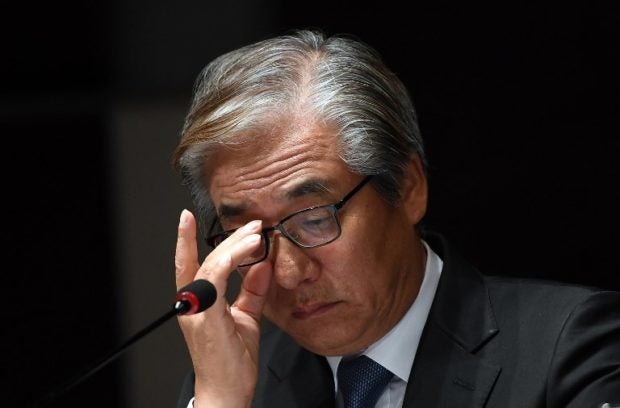 Kim Hyo-joon, head of the BMW’s Korea unit, adjusts his glasses during a press conference at a hotel in Seoul on August 6, 2018. German automaker BMW apologized on August 6 over an alleged delay in recalling more than 100,000 cars in South Korea after a spate of engine fires angered consumers and sparked a government investigation. / AFP PHOTO / Jung Yeon-je

SEOUL — Representative Director and Chairman of BMW Korea Kim Hyo-joon officially apologized for a series of engine fires that broke out in its vehicles, in an emergency press conference Monday as the controversy continued to expand into more lawsuits by customers.

“BMW sincerely apologizes for causing inconvenience due to a series of fires. Deepest regrets go out for drivers who have experienced accidents. BMW headquarters takes the case seriously with updates shared every day,” said Kim.

“A project team of about 10 professionals is currently in Korea working to solve the issue 24 hours a day. All-out efforts will be made to ensure safety. We deeply apologize for inconvenience caused.”

“To make it perfectly clear, the root cause is the EGR cooler leakage,” said Ebenbichler.

“This is, however, not enough to lead to thermal events. You need to have a number of other factors: high vehicle mileage on top of that you need to have specific driving conditions, for example, constant driving at higher speed for a longer period time, and a bypass valve needs to be open.”

Auto experts here have raised the possibility of other causes such as software or a faulty intake manifold.

BMW emphasized the cause of thermal events is not specific to Korea, as the same EU software and EGR system are installed in BMW vehicles sold here and worldwide, except in the US which has different emissions regulations. Rates of engine fires, between level one and three, observed here are similar to other jurisdictions, and the same campaign has been decided for Europe, the company said.

According to BMW, the failure rate of diesel vehicles here stands at 0.1 percent, and 0.12 percent worldwide.

The automaker has been facing widening controversy over some of its models as 32 units so far this year have caught fire. Most recently, a BMW 520d sedan caught fire Saturday in South Jeolla Province after receiving a safety check just last week.

In the recall starting Aug. 20, the EGR cooler and module will be replaced with new ones, and EGR pipes will also be cleaned, the company said.

In efforts to contain the engine fires, 61 BMW service centers nationwide are working 24 hours a day, including weekends, and the number of call center workers has been increased by 200 people, the company said.

Meanwhile, marking the first consumer protection group to take action since the series of BMW fires began, the Korea Consumer Association said Monday it is preparing to file a lawsuit against the German luxury carmaker with about 100 members of a BMW car owners’ club. It will recruit more plaintiffs in the following weeks.

Memberships of an online group called “BMW fire victims’ class suit” doubled over the weekend to 6,891 members as of Monday, from about 3,000 Friday.

“Owners of recalled vehicles are under immense mental stress running their cars, as it is difficult to receive repairs at overloaded BMW service centers, while they have also received financial harm due to a plunge in the used car price,” the KCA said in a statement.

Law firm Heon, representing the KCA and 100 BMW owners, is currently working with plaintiffs and advisers on details of the lawsuit and compensation, the law firm said.

According to the KCA, some 30 professionals, including automotive professors, lawyers, former employees of the National Forensic Service, technicians and mechanics, among others, will be offering advice throughout the process.

BMW Korea is also facing more pressure from the Ministry of Land, Infrastructure and Transport to transfer additional documents to investigate the possibility of other faulty parts or systems.

“BMW recently transferred technical documents related to exhaust gas recirculation, but we see this (documents submitted) to be insufficient. We have asked for additional documents on parts that have been mentioned as possible causes for engine fires,” the ministry said.