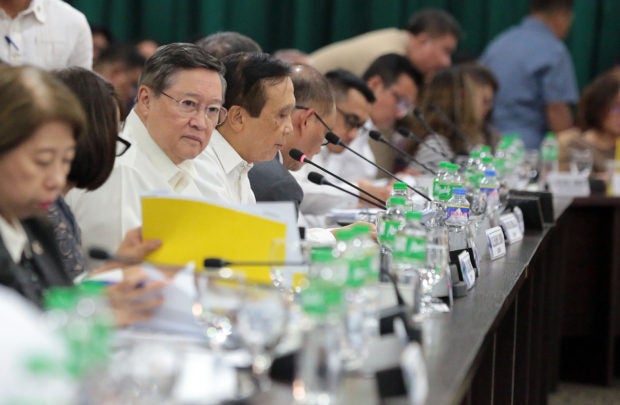 The head of the Duterte administration’s economic team on Tuesday reminded legislators of President Duterte’s wish to pass by yearend the second tax reform package that will bring down the corporate income tax rate while rationalizing the fiscal incentives being given away to investors.

During the House appropriations committee hearing on the proposed 2019 national budget, Finance Secretary Carlos G. Dominguez III also disclosed that the actual revenue gain from the first package or the Tax Reform for Acceleration and Inclusion (TRAIN) Act during the first half exceeded the goal.

“The TRAIN Law, which you kindly passed, and which was implemented at the start of 2018, contributed P33.7 billion in revenues for the first half of the year—surpassing our target by P3.6 billion,” Dominguez said.

Signed by Mr. Duterte last December, the TRAIN Law or Republic Act No. 10963 since Jan. 1 this year jacked up or imposed new excise taxes on consumption of cigarettes, sugary drinks, oil products and vehicles, among other goods, to compensate for the restructured personal income tax regime that raised the tax-exempt cap to an annual salary of P250,000.

“In 2019, the national government aims to raise total revenues of P3.2 trillion. This includes the revenue of P181.4 billion to be generated from TRAIN and the proposed tax reform package 1B,” Dominguez added.

With regards to the second tax package, Dominguez noted that “the House has conducted the hearings as of July 24 and we expect Congress to heed the President’s call to have the bill signed into law by December 2018.”