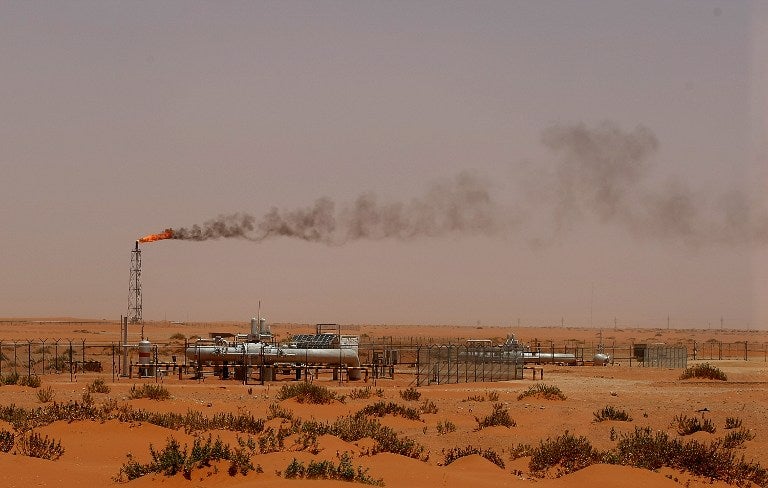 A flame from a Saudi Aramco oil installation known as “Pump 3” is seen in the desert near the oil-rich area of Khouris, 160 km east of the Saudi capital Riyadh, on June 23, 2008. As high oil prices and improved efficiency force refineries in the US and Europe toward closure, the industry is shifting toward the Middle East and Asia in a move fueled by a thirst for energy among emerging economies. AFP PHOTO/MARWAN NAAMANI

“All oil shipments through Bab al-Mandab Strait have been suspended temporarily until… maritime transit through the area is safe,” Energy Minister Khalid al-Falih said in a statement released by state media.

Two oil tankers operated by the Saudi shipping group Bahri, each with a two million barrels capacity, were attacked by Huthi rebels in the Red Sea, state giant Aramco said in a statement.

“One of the ships sustained minimal damage. No injuries nor oil spill have been reported,” Aramco said.

The oil giant said the decision to suspend shipments was “in the interest of the safety of ships and their crews and to avoid the risk of oil spill.”

The coalition has repeatedly raised alarm that Huthi rebels threaten vessels in the Red Sea – a key shipping route for world trade – through their control of the strategic Hodeida port.

The Bab al-Mandab Strait, one of the world’s busiest shipping routes, is the southern entrance to the Red Sea.

“This terrorist attack is a dangerous threat to the freedom of navigation and international trade in the Red Sea,” said Turki al-Maliki, a spokesman for a Saudi-led coalition fighting in Yemen.

“Port of Hodeida is still the starting point of terrorist attacks.”

Pro-government forces backed up by a coalition led by Saudi Arabia have paused their offensive on Hodeida port in a bid to give UN-led peace efforts a chance.

The United Arab Emirates, whose forces in the coalition have been spearheading the Hodeida assault, has warned that troops could “liberate” the port city if those efforts fail.

Saudi Arabia intervened in Yemen in 2015 at the head of a military coalition backing the country’s government after Huthi rebels ousted it from the capital Sanaa the previous year.            /kga