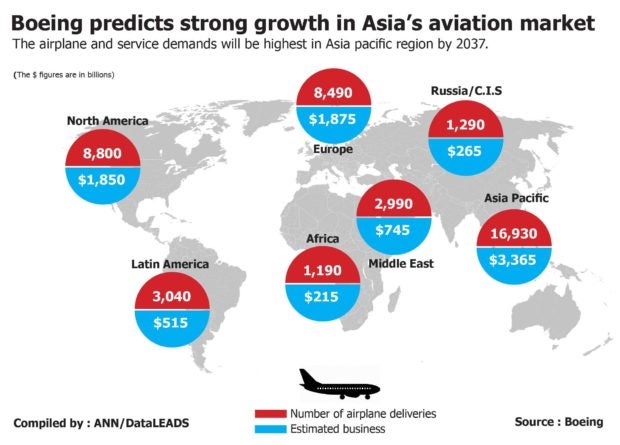 NEW DELHI — Boeing, the world’s largest planemaker, has unveiled its forecast for aviation market for the coming twenty  years and reaffirmed its growth throughout the world.  The company’s annual forecast called as the Commercial Market Outlook projects that the world fleet of jet planes would need an additional fleet of  42, 370 valued at US$6.3 trillion. The forecast predicts that the global demand for commercial aviation services will create a market opportunity of US$15 trillion.

According to Boeing, “there are more than 900 airplanes today that are over 25 years old. By the mid 2020’s, more than 500 airplanes a year will reach 25 years of age – double the current rate – fuelling the retirement wave.  Thus 44 per cent of the new airplanes will be needed to cover replacement alone, while the rest will support future growth”

Asia Pacific will be the leading region in terms of the demand for airplanes and service market value.  According to Boeing the region operators will demand 40 per cent of passenger jet deliveries in the next twenty years, more than double the amount as compared to other regions.

China will be a key player in Asia that will contribute to Boeing’s growing business in the region. Analysts predict that China’s growing middle class will eventually lead to the country overtaking the U.S. within 10 to 15 years as the largest domestic airplane passenger market in the world.  Airplane demands will be highest in the region at 16,930 deliveries valued at US$ 3, 365 billion.

North America is predicted to have second highest demand of airplanes with the requirement of 8,800 deliveries valued at US$1,850 billion.  The aviation industry in the region has been experiencing a steady growth in the last few years. Boeing forecasts that the total fleets will increase 44 percent in the next twenty years.

Europe will be the third highest region in terms of demand of airplanes and estimated profit that it generates. Edging close to North America, the region is estimated to demand 8,490 airplanes in the coming twenty years. The market value is estimated to be US$ 1,240 billion.

The Commercial Market Outlook is the longest running jet forecast and considered  as the most comprehensive analysis of the commercial aviation industry.