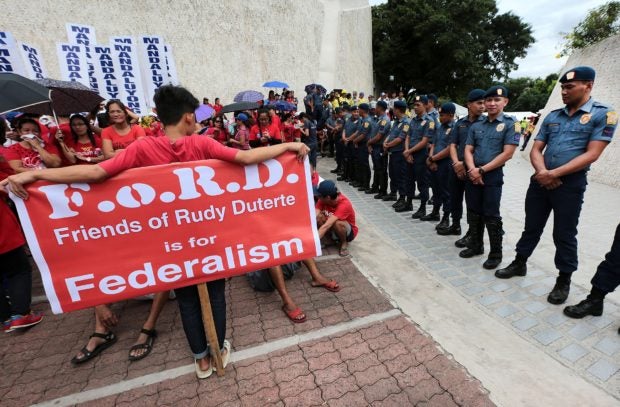 A shift to federalism can only spell disaster for the Philippines, possibly stoking “hyperinflation” and ceding more powers than what many local government units (LGUs) are ready to handle, top economists from the University of Asia and the Pacific (UA&P) warned on Monday.

UA&P’s Bernardo Villegas – also known as the “prophet of boom” due to his consistently upbeat view on the Philippine economy – is not so optimistic on the proposed shift to a federalist form of government.

“I think it will be a disaster. I won’t go as far as (former) Chief Justice Hilario Davide saying it’s going to be hell but it’s not necessary and it’s counterproductive,” Villegas said in a joint economic forum held by First Metro Investment Corp. and UA&P on Monday.

“Imagine the duplication of all expenses of all levels and the completely arbitrary way of putting together provinces for the so-called federal states,” Villegas said.

The economist said the Philippines should learn from history, noting that other nations that were successful in embracing federalism were those which already had strong local government structures in the first place.

Otherwise, he said a spending binge that would arise from a shift to federalism could trigger “hyperinflation,” a situation when consumer prices are skyrocketing, sharply eroding the value of the local currency.

Villegas added there’s “no rhyme, no reason” on how the so-called federal states in the Philippines were proposed to be organized.

“For example, they say the whole of CALABARZON (Cavite-Laguna-Batangas-Rizal-Quezon) can be one federal state. I can assure you. We come from Batangas. We hate the Caviteños. We’ll never get together. It’s partly a joke, (but) partly serious,” Villegas said, adding that Batangas may be more comfortable partnering with Mindoro because of their synergies.

Under the local government code of 1991 which devolved powers to LGUs, Villegas said “enlightened” and “competent” governors and mayors already had the leeway to act as federal states and team up with other LGUs.

Victor Abola, another senior economist from UA&P, noted that nations that had suffered from hyperinflations – specifically a consumer price upsurge of 1,000 percent – were mostly from Latin America as well as Eastern Europe, which had broken away from communism.

In Latin America, he noted that two of the biggest economies – Brazil and Mexico – had the highest inflation in the region “because the federal state is not strong enough to control the local states.”

“So even if the federal government makes an agreement with IMF (International Monetary Fund) for fiscal austerity, the states will continue spending till thy kingdom come because of elections and that’s the primary reason for their hyperinflation episodes,” Abola said.

Citing his regression study on middle-income countries, Abola added that federalism did not boost economic growth.

Abola is likewise concerned on the quality of administration at the LGU level.

“At the national level, it’s getting more professional but at the local level, we usually have political appointees. And then the other thing is, of course, they are not very transparent. You don’t know how the money in your city and municipality is being spent,” he said.

In the case of the Autonomous Region in Muslim Mindanao (ARMM), Abola said this region was “given practically everything they want and they have not managed to do it well.”

Catapulting Philippine regions into federal states, Abola said, “is like going from grade school to doctorate in Physics…It’s going to be a disaster.”

Read Next
Dollars sent home by overseas Filipinos maintain uptrend in May
EDITORS' PICK
KZ Tandingan taking it one step at a time
Pacquiao camp says McGregor fight being considered
Water remains our saving grace right now
The power of two: Renewable energy and natural gas are the cleaner, better combination
As campaign heats up, Trump woos Latino, Black voters
SMC applying sustainable measures vs geohazards in Bulacan airport site — Ramong Ang
MOST READ
12 provincial bus routes in Central Luzon, Calabarzon to open Sept. 30 – LTFRB
Even without corruption, Manila Bay rehab is not OK during pandemic – Robredo
Has Duterte done any good? Robredo says yes, but he missed out on many things
Imee Marcos agrees with Ombudsman: SALN ‘weaponized’ to ‘terrorize’ gov’t execs
Don't miss out on the latest news and information.