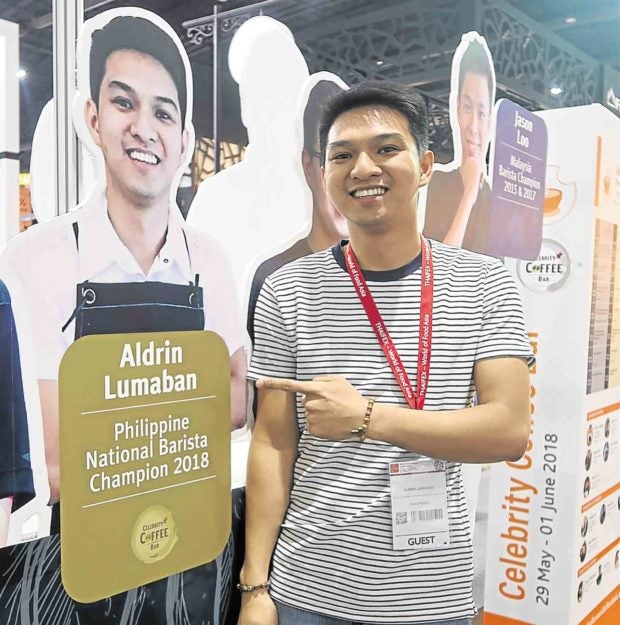 To some, coffee is just coffee. But to real coffee lovers, coffee is not just that drink in the morning that makes you come alive and gives you a better personality. It’s about aromas and depth of flavor … kind of like wine. To connoisseurs, it is also about origin, say how beans from Sumatra may differ from beans from Batangas. And for real nerds, there’s that guessing game of what flavors you are reminded of in each cup: Whether it’s vanilla or orange or even nail polish.

I stood extremely fascinated at a coffee “cupping session” that happened at the Thaifex last month. Thaifex World Food of Asia is the largest food expo in Asia with 2,537 exhibitors, participants from 41 countries and foot traffic estimated at over 60,000 people.

Members of the Asean Coffee Federation stood around a long table that had on display beans from various Asean countries including Vietnam, Malaysia, Laos, Indonesia and the Philippines. Then the ritual: A process of pouring water over the coffee, smelling the aroma of each cup, and then what they call “cupping”.

“Coffee cupping is a systematic way to profile coffees. During cupping, we observe the fragrance and aromas of coffee, we taste for cup quality as well—how well it was processed, and we profile the flavors found in the coffees,” explains Commune Cafe’s Ros Juan, who was also at Thaifex as a member of the International Women’s Coffee Alliance.

The coffee “cuppers” then went around the table, like playing musical chairs, and each one slurped the coffee from a spoon that was returned into a glass of hot water, then they would spit out the coffee before tasting the next cup. This would go on until each one had a “cup.” It was quite an experience.

For some, the point of the practice is knowledge. For others, the point is to help determine the quality of the coffee, with trade as the ultimate goal. “Coffee cupping is a practice that is meant to determine the quality of coffee. It also helps you get to know coffee origins, processing practices and helps you distinguish one coffee from another. All this information can be derived from smelling and tasting coffee. There is a standardized system in cupping coffee so that there are constants in the process and only coffee is the variable,” Ros adds.

In fact, coffee is serious business. The US Agricultural Department forecasts Vietnam’s 2018-2019 production will hit a record 29.9 million bags, with a bag weighing 60 kilograms. The forecast for Indonesia is 11.1 million bags.

Sadly, the Philippines is not even on the list that I saw for USDA World Markets and Trade forecast for coffee. Coffee guru Chit Juan, who was also at Thaifex, admits and laments that our coffee production, while having excellent quality, is too small to be competitive in the world market.

“In Thaifex, we get to have face time with coffee lovers,” Ros shares. “We show them the map, talk to them and explain that the Philippines has all four species of coffee (Arabica, Robusta, Liberica and Excelsa), which not many coffee producing countries can say [they have].”

And after tasting Philippine coffee, buyers and other coffee lovers are won over. “Some ladies from Chile were so impressed with our coffee,” Ros recalls. “One lady has a restaurant in Chile. She doesn’t drink coffee black. Chileans, like most Filipinos, enjoy their coffee sweet. But she tried our hand-poured, 100-percent Arabica from Benguet and she was bowled over. She is now considering black coffee.”

The Philippine Coffee Board, aside from working hard to promote Philippine coffee on the international stage, also wants to expand the coffee vocabulary to include Filipino flavors. “The usual cupping standards are those of the Specialty Coffee Association’s, which originated in the US. So the ‘speak’ and the taster’s vocabulary is very Western,” Ros explains.

Chit and Ros are on a mission to change this: “We want to also identify flavor profiles that are uniquely Asean, like ube, tamarind, coconut, latik, because from the farm to roasters, retailers, baristas, the Asean supply chain is exposed to local flavors, not stone fruits like peaches and apricots or tree nuts like Brazil nuts and fresh hazelnuts. So the way we describe coffee can be different,” Ros says.

Neither are we behind in the practice of serving coffee—our baristas can compete with even the best in the world. This was proven by Aldrin Lumaban, a barista from Yardstick Coffee in Makati. Aldrin is head of “quality and education” at Yardstick and is the reigning Philippine National Barista Champion.

Apparently, there are so many intricacies to pouring coffee as well, from brewing to latte art. Aldrin was invited to participate at Thaifex to represent the Philippines in the Celebrity Coffee Bar where various barista “celebrities” from around the world demonstrated their skills in latte art, brewing, and shared their experiences in preparing the best cup of coffee.

He was happy to note that Filipinos are not behind on the barista trends in the international scene. He hopes to hold a few seminars at Yardstick and share with coffee enthusiasts and baristas what he learned at Thaifex.

One thing that I realized as I spoke to traders at Thaifex is that there is a great demand for Philippine food products, whether raw or manufactured. The demand is there; it’s the supply that needs to keep up. There is great interest in Filipino goods: We have the best mangoes, we may also have some of the world’s best coffee. Yet, we are unable to meet the quantities demanded.

I hope the Department of Agriculture steps up its game so that we are not only recognized in the international arena, but that the interest converts to sales and eventually a better economy overall. There are many factors that contribute to this failure in trade: Farmers distrust large corporations that have in the past abused them, lack of farm to market roads and lack of support from the government for farmers.

Let’s hope that the situation changes for the better within the next few years. I still dream of the day when Philippine coffee will be known and appreciated and consumed all over the world.