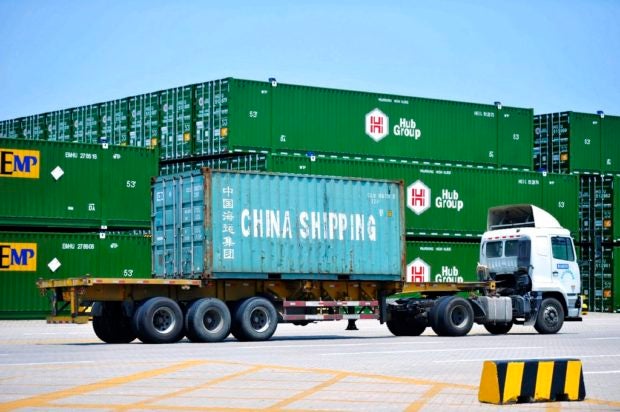 In this July 6, 2018, photo, a truck moves a China Shipping shipping container at a port in Qingdao in eastern China’s Shandong Province. China’s government on Wednesday, July 11, 2018, has criticized the latest U.S. threat of a tariff hike as “totally unacceptable” and vowed to retaliate in their escalating trade war. (Chinatopix via AP)

BEIJING — China slammed United States’ threat to expand tariff hikes to imports including apples, fish sticks and French doors as a “totally unacceptable” escalation of their trade battle and vowed Wednesday to protect its “core interests.”

The government gave no details but the Commerce Ministry earlier threatened “comprehensive measures.” That prompted fears Beijing might go beyond matching US import tax increases by harassing American companies in China.

The spiraling conflict over Chinese technology policy threatens to chill global economic growth. It stems from Washington’s belief that Beijing steals or pressures companies to hand over technology and worries that plans for state-led development of Chinese champions in robots and other fields might erode American industrial leadership.

The US Trade Representative (USTR) announced Tuesday a possible second round of tariff hikes targeting a $200 billion list of Chinese goods ranging from burglar alarms to mackerel. That came four days after Washington added 25 percent duties on $34 billion of Chinese goods and Beijing responded by increasing its own taxes on the same amount of American imports.

“It is totally unacceptable for American side to publish a tariff list in a way that is accelerating and escalating,” said a Commerce Ministry statement. “To protect the core interests of the nation and its people, the Chinese government will be forced to impose necessary countermeasures.”

The USTR said the latest action was in response to Beijing’s failure to change its policies and its retaliatory duties. President Donald Trump has threatened higher tariffs on more than $500 billion of goods, or nearly all of China’s annual exports to the United States.

The USTR will accept public comments and hold hearings on August 20-23 before reaching a decision after August 31, according to a senior US official who briefed reporters on condition of anonymity.

The first US tariff list focused on Chinese industrial products to help cushion the impact on American consumers. The latest list hits items that US households buy, including electric lamps, apple juice and fish sticks.

Beijing’s lopsided trade balance with the United States means it will quickly run out of imports for retaliation. China imported US goods worth $130 billion last year and Friday’s tariff hike hit $34 billion of that, with another $16 billion cited for a possible increase.

Instead, its heavily regulated economy gives Beijing tools to disrupt operations for American automakers, restaurant chains and other companies that are looking to China to drive revenue growth. Regulators can deny or cancel licenses or tie up companies by launching tax, environmental or anti-monopoly investigations.

Companies are watching US chipmaker Qualcomm Inc., which has waited for months for Chinese regulators to decide whether to allow its proposed $44 billion acquisition of NXP Semiconductors. All other major governments have approved the deal.

The economic impact of the conflict already is spreading.

The European Union Chamber of Commerce in China said this week its member companies are rearranging their trade shipments to ensure any bound for the United States don’t pass through China.

Members of Congress are increasingly questioning Trump’s aggressive trade policies, warning that tariffs on imports raise prices for consumers and expose US farmers and manufacturers to retaliation abroad.

“Tonight’s announcement appears reckless and is not a targeted approach,” said Senate Finance Chairman Orrin Hatch in a statement.

Investors had been taking the trade war in stride but Tuesday’s announcement appeared to dent that optimism.

The conflict is “far from over,” Hannah Anderson of JP Morgan Asset Management warned in a report, “and the impact will be global.”     /kga