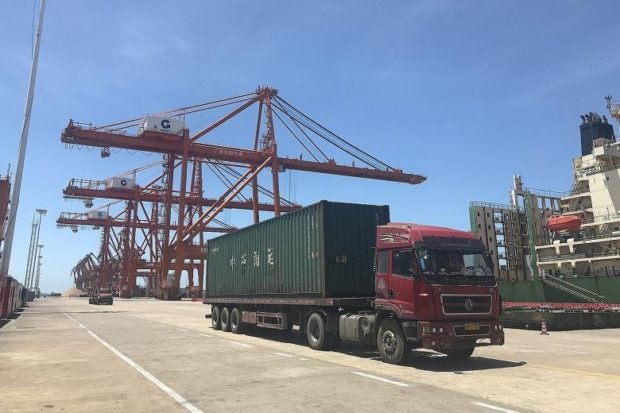 QINZHOU, China — Industrial cargo such as car parts, machinery and petrochemical products from western Chinese inland cities Chengdu and Chongqing now have an alternative route to be exported to Singapore and beyond.

They are transported via a railway network known as the Southern Transport Corridor (STC) to Qinzhou port in southern Guangxi and onward over a dozen shipping routes to overseas destinations.

Compared with the traditional route via the Yangtze River to Shanghai port, the STC cuts transit time within China from more than two weeks to just two days.

Deputy Prime Minister Teo Chee Hean, who is on a nine-day trip to China, visited the container port at the Beibu Gulf (Gulf of Tonkin) yesterday as part of his tour of key nodes along the STC.

The STC, which has the participation of 10 western and southern provinces, extends from the Chongqing Connectivity Initiative, the third joint project between China and Singapore.

Mr Teo, who was accompanied by Senior Minister of State Koh Poh Koon and Senior Parliamentary Secretaries Baey Yam Keng, Sun Xueling and Tan Wu Meng, was briefed on the port’s developments and took a tour around it and the connecting railway station.

Last year, it handled 430,000 20-foot equivalent units (TEUs) of cargo, and it aims to hit one million TEUs this year. The annual capacity of the port is three million TEUs.

“The port is growing rapidly, we see a 30 per cent growth in our shipping volume every year since 2015,” said Mr Teo Siong Seng, chairman of PIL, which has two sailings a week from Qinzhou to Singapore.

Most of the cargo flow is southbound now, with agricultural raw materials from Guangxi and neighbouring Guizhou province, as well as industrial goods from Chengdu and Chongqing, heading towards Qinzhou to be exported overseas.

Since the start of this rail freight service last September, there have been three weekly train trips to and from Chengdu to Qinzhou, and four southbound trains and two northbound ones linking Chongqing and the port.

Trial operations from Lanzhou, capital city of western Gansu province, and Kunming, capital city of south-western Yunnan province, have started. And there are plans to encourage local players in the neighbouring cities to use the STC railway network.

Mr Teo arrived in China last Thursday for a wide-ranging visit that saw him take in Beijing and Tianjin before travelling to southern Guangxi. He will visit south-western Chongqing today before ending the trip tomorrow in Lanzhou city in western Gansu province.