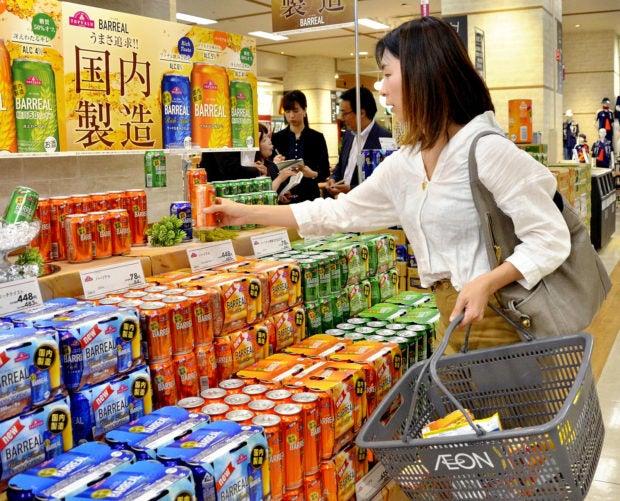 TOKYO — Major beer companies are split over how to deal with own-brand products manufactured for such retailers as supermarkets and convenience stores.

Kirin Brewery Co. has gone on the offensive by accepting a series of requests for manufacturing such own-brand products — known as “private brands” in Japan — but other beer firms, such as Asahi Breweries Ltd. have adopted a wait-and-see stance.

As the domestic market for beer and beer-like alcoholic beverages is shrinking, it has become more important for beer firms to cooperate with retailers. However, how to deal with own-brand beers has become a thorny issue for them, as such products are likely to compete with the manufacturers’ branded products.

20% sales increaseIn June, major supermarket chain operator Aeon Co. updated three beverages of its own-brand lineup of so-called third-segment quasi-beers, Topvalu Barreal. The price for a 350-milliliter can remained the same at ¥84, but Aeon switched manufacturers for its quasi-beer to Kirin from a South Korean maker.

“I’ve been buying own-brand beers over the past year. If Kirin is producing it, I believe the taste will be good,” said a 42-year-old homemaker from Shinagawa Ward, Tokyo, who picked up a can of Topvalu. The newly revised Liquor Tax Law, which came into force in June 2017, is one of the reasons why the own-brand labels have become popular.

According to Aeon, sales of Barreal increased about 20 percent over the past year. Kirin also took on commissioned production of FamilyMart Co. and Lawson Inc.’s own-brand quasi-beers. Currently, the market share of own-brand products is still small. However, as own-brand items can expect stable shipments with fewer costs, such as advertising expenses, such products are expected to improve utilization rates of factories. 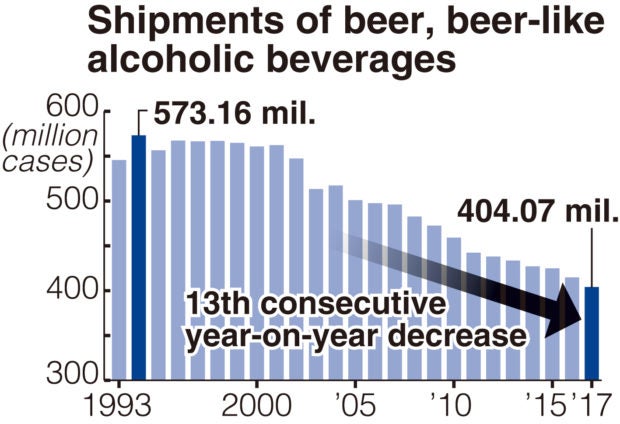 Own-brand beers only carry the logos of the retailers. Sapporo Breweries Ltd. also manufactures products for Aeon, but there are no other signs of a shift toward more manufacturing of own-brand products by the majors.“What is important is to produce products with added value — cheapness is not the only factor,” Asahi Breweries said.

“We would like to enrich our brand under the policy of being involved in the entire process, from manufacturing to sales,” said Suntory Beer Ltd., which has also adopted a wait-and-see stance.

Major firms have been cautious over own-brand products, because of their loyalty to their own product ranges. There is also a deep-rooted concern that low-price own-brand products could have an adverse effect on the major beverage brands.

Despite such concerns, Kirin started accepting the production of own-brand products. “It could bring favorable effects on the sales of our own products,” a senior official of the company said.The market for beer and beer-like alcoholic beverages continues to shrink, with total shipments posting the 13th consecutive year-on-year decrease in 2017.

By strengthening relations with strong-performing retailers, Kirin hopes their outlets will place Kirin products in prominent parts of the store. Observers say that in order to curb the trend of consumers moving away from beer, it is important to attract consumers to the product, irrespective of the brand. “How beer companies deal with own-brand products may act as a litmus test for the future power structure in the industry,” an analyst said.