The right way of pouring beer, according to Pilsner Urquell 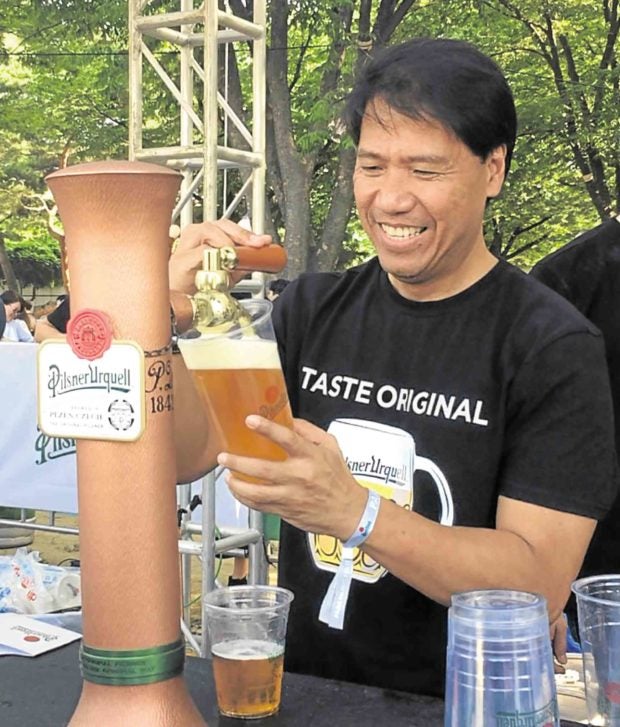 Jojo Vega of Don Revy, Pilsner Urquell’s Philippines distributor, does a “perfect pour” just like how they do it in Plzn, the City of Beer in the Czech Republic. —PHOTO BY MARGAUX SALCEDO

Before anything else, may I shout out a loud “Happy Birthday!” to our beloved Archbishop of Manila, His Eminence Luis Antonio Cardinal Tagle, on the occasion of his 61st birthday last Thursday, June 21, on the Feast of St. Aloysius, patron saint of youth and students, and whom he was named after.

I learned from Jessie Sincioco, personal chef to no less than Pope Francis, that well wishers are allowed to personally greet Cardinal Tagle at the Arzobispo.

So we gave him something only someone with a good heart can appreciate: a sack of full back fat chicharon from Sta. Maria, Bulacan. I hope he liked it.

Chicharon is best appreciated with ice-cold beer. I didn’t give His Eminence beer because I did not want to give him the wrong impression… and because I wanted to keep all the good beer for myself, paired with an awesome Kitayama Porterhouse steak I was cooking that night.

This good beer is called Pilsner Urquell, created by a Czech brewing company in 1842. Bavarian brewer Josef Groll created the first golden “pilsner” lager at the Urquell brewery in Plzen, now known as the City of Beer (90 kilometers from Prague). On October 5, 1842, Groll finalized the recipe and on November 11, 1842, the new beer was first served at the feast of Saint Martin.

San Miguel Pale Pilsen, which created its own lager in 1890, was inspired by this lager from the town of Plzen, hence the use of the word “pilsen” on its label.

Last weekend in South Korea, I had the privilege of meeting Pilsner Urquell tapsters from around the world—Korea, Hong Kong, Singapore, even from Pilsn in the Czech Republic—and I was astounded at how they take their beer so seriously.

Jojo Vega of Don Revy, the exclusive importer and distributor of Pilsner Urquell in the Philippines, flew to South Korea over the weekend to meet Adam Vlcek, master tapster for the Asia Pacific region of Pilsner Urquell, and learned how to do this “perfect pour.” Vlcek was born in Plzen so he is not only an expert on Pilsen beer, he probably has pilsen lager in his veins.

Hladinka is the standard style, with about one quarter foam, and by the end of the weekend, Vega had perfected this pour. This pour is the perfect balance of sweetness and bitterness and goes well with rich food (this, I think, would go well with the full back fat chicharon).

Šnyt is an almost forgotten method of drinking beer, with just a small “cut” of beer, i.e., two fingers of beer, three fingers of foam, and one finger of empty glass. Stories have it that this pour was created for beer connoisseurs or for those who want to order less than a full glass but want to avoid the shame of ordering a small beer. It also goes well with heavy food because it is light and very drinkable, so I imagine it would be good with steak or lechon.

Mlíko, or a “milk” beer, is a glass almost entirely full of foam except for a sliver of beer at the bottom. Its cultural nuance is that it is typically drunk at the end of the night because the foamy, sweet taste is supposed to give the drinker “a jolt of energy before stumbling home.” Some order this for pairing with sweet food. Others simply like its seductive, sweet bouquet and fresh finish, appreciating it just like wine.

These “pours” are mastered by the tapsters because of the importance of foam to the flavor of the beer. It was explained that a thick “head” (top part of the pour) of dense, wet foam is important because first, it seals in the freshness of the beer by protecting the delicate flavors of the beer from oxygen. That is also why the foam is part of the beer, not just dry air bubbles or carbon dioxide. Second, it creates balance in the flavors of the beer: the foam tastes sweet and smooth, to balance out the hoppy golden lager.

Any respectable tapster of Pilsner Urquell will never serve you beer without the proper head of wet, dense foam.

But it’s not just the pour that distinguishes Pilsner Urquell from all other pilsens.

Each bottle of Urquell distributed around the world uses 100-percent Czech ingredients and is brewed and bottled in Plzen, Czech Republic; unlike other beers that may be manufactured in the destination country, e.g. some international beers are produced and bottled here by Asia Brewery.

This is because of something that the town of Plzen has that no other country in the world has: soft Plzen water.

Apparently not. Our water in the Philippines, for example, seems to have tasting notes depictive of more minerals, thus not soft. The water in Plzen is so pristine that it results in a taste of “freshness” that cannot be reproduced in any other country.

Another ingredient that is unique to Plzen is their hops. Pilsner Urquell uses Saaz hops from Žatec, a historic town in the Czech Republic famous for an over 700-year long tradition of growing Saaz noble hops. The farms are just 70 km from their brewery and Pilsner Urquell has been getting hops from these farmers since 1842.

The soft water gives the beer that fresh flavor, the Saaz hops create bitterness, and triple-decocted malt adds sweetness to create the perfect brew. Further, tapsters pour the beer with that dense wet foam to add smoothness and seal in flavor and aroma, creating the perfect pilsen lager!

Ray Stark, regional director for the Asia Pacific region of Pilsner Urquell, shared how proud he was that Pilsner Urquell brews beer using the same recipe it has been using for 175 years just to maintain its original, exceptional quality: a refreshing crispness, subtle caramel tones, pleasing bitterness and a clean finish.

For a beer that uses a 175-year old recipe and takes pains to stay true to the tradition of making excellent lager, I think it’s just right. Gotta give the tap respect.

Now, I’ll just have to bring my full back fat chicharon to the bars that have this perfect pour.

The first draft outlet of Pilsner Urquell in the Philippines is at Belle and Dragon on C. Palanca St, OPL Building, Legaspi Village, Makati. Another place to enjoy Pilsner Urquell on tap, although they use their own tap system, is Tap Station in Makati, Ermita and Tagaytay.