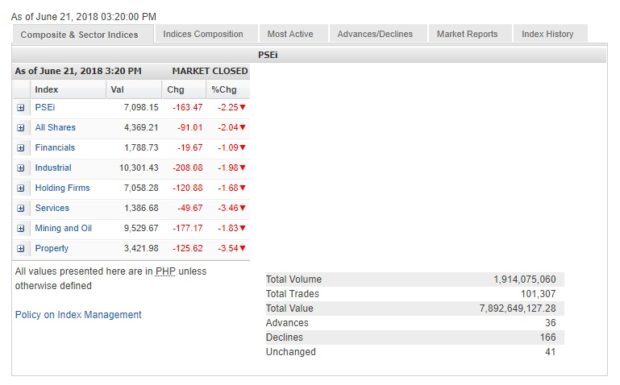 The local stock barometer sank to the 7,000 level yesterday as foreign funds scrambled to trim their exposure now that the bears have wrestled control of the market from the bulls.

Sliding for the sixth straight session, the main-share Philippine Stock Exchange index (PSEi) lost another 163.47 points or 2.25 percent to close at a 17-month low of 7,098.15. Regional markets were likewise mostly sluggish.

“They (foreign funds) have not stopped dumping since February. By my estimates, they still have P120 billion plus in net buy position, so it will take awhile before this stops,” PNB Securities president Manuel Lisbona said.

“We are looking at 6,700 if the market falls below the psychological 7,000 level. At that level, valuations will be very attractive,” he said.

At this point, Lisbona said it would be best for investors to raise liquidity or preserve capital so that they would have enough funds to deploy when the market starts recovering.

“What’s nice about this is that the market is still orderly – no panic selling. What will be concerning is if the local institutional investors decide that they’ve had enough losses and start heading for the exit,” Lisbona said.

The 25-basis point interest rate hike sanctioned by the Bangko Sentral ng Pilipinas had been expected by the market but risks of further rate hikes might have contributed to the steep decline.

But raising interest rate is seen as a bitter pill that the BSP will have to swallow in order to prevent further peso fall against the US dollar, given that the Philippines is a net importer from the rest of the world.

At the local market, all counters were bludgeoned yesterday, particularly the property and services counters which both tumbled by over 3 percent.

The financial, industrial, holding firms and mining/oil counters all declined by over 1 percent.

Value turnover for the day amounted to P7.89 billion. There were 166 decliners that overwhelmed 36 advancers while 41 stocks were unchanged.

The index was weighed down most by telecom giant PLDT, which lost 6.5 percent, while Ty family-led conglomerate GT Capital lost 5.64 percent.