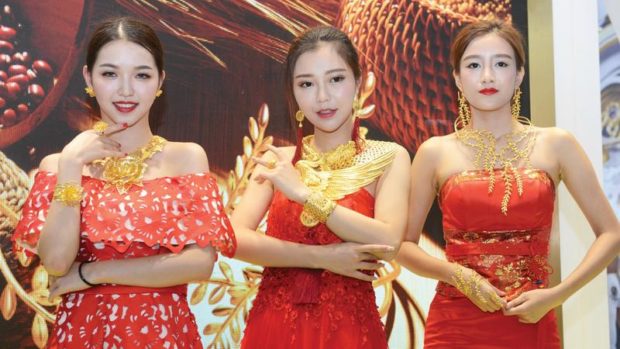 HONG KONG — For the new generation of Chinese jewelry consumers, all that glitters is not necessarily gold. While a growing economy will continue to encourage Chinese millennials to buy jewelry, their shift in style preferences and investment views has taken some of the shine off the yellow metal.

These consumers view jewelry as an accessory more than an investment and they are buying 18-karat and 22K gold jewelry rather than 24K, pure gold products.

This, in turn, slowed China’s gold consumption as jewelry accounted for nearly 70 percent of total demand. Despite the decline, China remains the world’s biggest gold consumer and the second biggest jewelry producer.

According to the Gold Survey 2018 report issued in May by Thomson Reuters GFMS, China’s total gold demand declined 3 percent to 991 tons in 2017. The figure excludes gold purchases made by the Chinese central bank.

The London-based research firm said the reduced demand from Chinese jewelry manufacturers is one of the key factors that trimmed China’s gold demand.

“The lower affinity to gold adopted by the younger Chinese generation compared to their predecessors has also played a major role in the decline in gold demand,” Thomson Reuters said.

Samson Li, a senior analyst at Thomson Reuters GFMS, said the younger Chinese consumers prefer the 18K and 22K jewelry, whose designs, when compared with 24K jewelry, are more sophisticated.

Li does not see this consumption pattern shifting anytime soon. But he said the trend is only true for first- and second-tier cities where most consumers do not necessarily equate jewelry with investment. In third- and fourth-tier cities, he said most people still prefer 24K jewelry as they consider it both an accessory and an investment.

Li added that the popularity of 3D jewelry is also reducing the share of 24K jewelry in the Chinese market.

Three-dimensional gold jewelry is manufactured through electroplating. This involves applying a thin layer of gold coating on another metal by using direct electric current. Most 3D jewelry is large but light in weight.

Thomson Reuters estimates that 3D jewelry manufacturing has grown tenfold in recent years, with more than 80 percent of gold pendants in China manufactured through this process.

In 2017, 3D fabrication rose as much as 35 percent and accounted for roughly 10 percent of total Chinese gold consumption.

“Assuming all else the same, a 3D hard gold jewelry piece consumes about 50 percent to 75 percent less gold than a similar pure gold piece and helps explain why China’s consumption of gold continues to retreat,” Thomson Reuters said.

And in some cases, jewelry designers themselves eschew gold as other metals are more pliable to avant-garde designs and can cater to changing tastes.

For example, Hong Kong-based artisan jeweler Wallace Chan is known for his work with titanium, creating pieces that are highly sought-after by collectors.

He prefers titanium over gold because it is “lighter, harder and has colorful ‘bones’ (that can) highlight the beauty of bigger, brighter (gem) stones”.

Chan said changing trends reflect the need for the jewelry sector to innovate not only in terms of design or workmanship but also the materials used.

Gold for investment accounts for roughly 20 percent of China’s annual gold consumption. But if Chinese want to invest in gold, they will not necessarily buy it in the form of jewelry. They are financially savvy when it comes to investment options — for example, buying physical gold in the form of gold coins and bars.

This trend has since slowed down following the decision of the People’s Bank of China to ban initial coin offerings and regulate virtual currencies to guard against financial risks and maintain stability.

The WGC said China is the world’s top market for gold bars and coins, recording 306.4 tons worth of gold investment in 2017. This was 8 percent higher than in 2016 and above its five-year average of 284.8 tons.

The Beijing-based China Gold Association said in its 2017 annual report that fluctuations in real estate and securities markets have increased demand for physical gold investment products. The association said more people view gold investment as a means to “store wealth”, with its value expected to increase over time.

“Most Chinese people are aware of gold as a hedging and investment vehicle,” said Mark To, head of research at the Hong Kong-based Wing Fung Financial Group.

To said in an interview with China Daily Asia Weekly that Chinese consumers know that gold is a “safe-haven” asset, used as a hedge against inflation or other investment risks like geopolitical tensions.

But like most investments, To said, investing in gold is also guided by considerations such as potential capital gains and portfolio diversification.

Li of Thomson Reuters said that unlike other commodities which depend on supply-demand fundamentals, gold — in the absence of news that would drive investors into safe-haven assets — is more of a “sentiment trade”.

In 2013, international gold prices crashed through the US$1,500 per ounce level, spooked by speculation that Cyprus would sell its gold reserves to fund its bailout. Li recalled that Chinese investors went bargain hunting then, amassing gold — whether in the form of jewelry or bars — expecting that prices would recover.

But international gold prices have remained below US$1,500 per ounce for the past few years, disappointing a lot of these bargain hunters. On June 11, gold futures were trading at around US$1,300 an ounce on the Chicago Mercantile Exchange.

The trader said while Chinese investors continue to buy physical gold, there is no surge in investment demand for gold.

“Demand from investors tends to fluctuate a lot. Unless the (market sentiment) changes, investment demand will remain the same,” he said.

Li said some Chinese investors also buy gold just to trade. They do not have to buy physical gold but instead trade gold online in ‘paper’ form via the Shanghai Gold Exchange.

He said banks, trading houses and even mining firms have mobile apps that allow investors to buy and trade even a few milligrams of gold.

Li said an investor who trades a significant volume of gold, say 2 tons, can demand to withdraw physical gold from the exchange.

Online trading is popular because it is convenient and requires minimal capital. But, as Li observed, investors use this to buy and sell and not to accumulate gold.

“They just buy low, sell high, and trade within the range,” he said. For instance, a retail investor might buy when gold is trading at US$1,300 per ounce and sell as soon as the international prices hit US$1,350 an ounce.

“People trade gold like a stock. So they just flip it,” Li said.