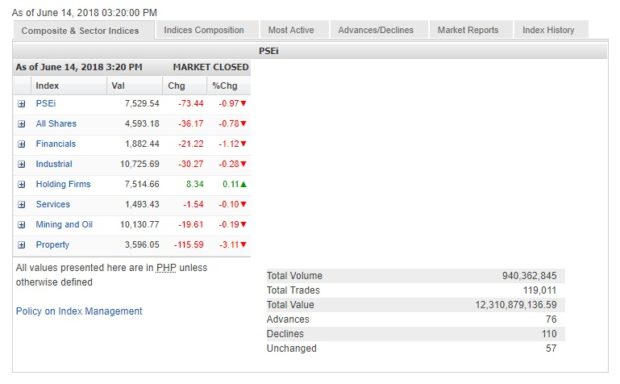 Philippine stocks weakened on Thursday, mirroring negative sentiments across the region after the powerful US Federal Reserve increased interest rates for the second time this year, cutting investors’ appetite for riskier assets like equities.

The benchmark Philippine Stock Exchange Index (PSEi) dropped close to 1 percent, or 73.44 points, to 7,529.54 by the closing bell on Thursday, the last trading day of the week. Trading will be closed on Friday, which was declared a holiday due to Eid al-Fitr or end of Ramadan.

Among subsectors, only holding firms closed in the green with a gain of 0.11 percent. Losers were led by property, which sank 3.11 percent.

It was followed by financials, down 1.12 percent, and industrial, down 0.28 percent.

The decline came amid relatively heavy volume on Thursday.

Data from the PSE showed that 940.4 million shares valued at P12.3 billion changed hands. There were 110 losers against 76 gainers while 57 companies closed unchanged.

It was followed by Ayala Land Inc., another major developer, which sank 2.49 percent to P39.15.