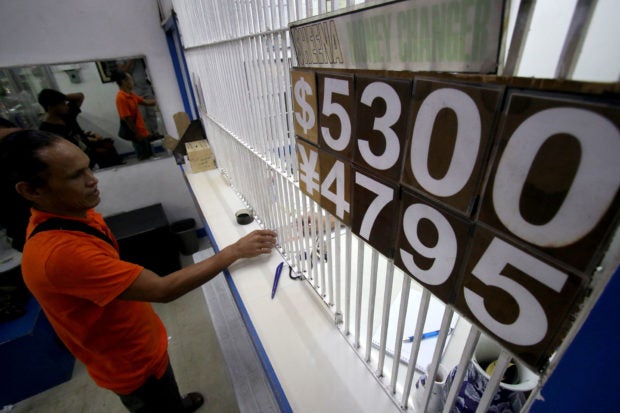 PESO-DOLLAR TRADING A customer transacts with amoney changer in Manila. The peso opened at 53 to the US dollar in Wednesday’s trading session, dropping to 53.26 before closing
at 53.23. —RICHARD A. REYES

The peso fell to its weakest level against the US dollar in 12 years on Wednesday as traders digested dovish statements of central bank officials that made financial markets uncertain about another interest rate hike next week to help cap local consumer prices.

At the same time, investors also unloaded the peso and shifted to the dollar without waiting for the outcome of a US Federal Reserve meeting where markets expected the world’s most influential central bank to raise its own interest rates for the second time this year.

Total volume was heavy with $773.17 million changing hands, compared to $653.1 million on Monday.

BDO Unibank chief strategist Jonas Ravelas said the peso’s weakness was due to the “prospects of a rate hike in the US this week” as well as the weaker trade data released by the government last week.

Asked to comment on the peso’s weakness, Bangko Sentral ng Pilipinas (BSP) Governor Nestor Espenilla Jr. said the Monetary Board “will be evaluating a very rich and broad range of information at its policy meeting next week.”

A weak currency aggravates inflation, as it takes more pesos to buy the same amount of goods and services from overseas, especially for oil products and raw material imports.

The inflation rate currently stands at 4.6 percent, brought to that level in May by a spate of price increases induced by the enforcement of the Duterte administration’s Tax Reform for Acceleration and Inclusion (TRAIN) Act in January, which amplified the effects of a sharp rise in world crude oil prices in recent weeks.

The TRAIN law raised the ceiling for tax-exempt income, but imposed an excise of P3 per liter for kerosene, P2.50 per liter for diesel and bunker fuel, and P1 per kilogram for liquefied petroleum gas (LPG).

The law also imposed an excise of P7 per liter for unleaded premium gasoline, naphtha, regular gasoline and pyrolysis gasoline.

The fuel imposts kicked up the prices of basic goods, leading to agitation for a raise in the minimum wage among labor groups and the introduction of legislation in the House of Representatives that would set a uniform base pay nationwide.

The Department of Finance said, however, that the tax hikes contributed only 0.4 percent to the current inflation rate.

Omitting his usual statement that the BSP was ready to act in case of worsening inflation, Espenilla said “recent developments on inflation and economic activity are key inputs but these are certainly not the only consideration.”

“We’ll be examining closely all the potential drivers of future inflation through the various transmission channels as affected by global developments, expectations formation, and uncertainty,” he said.

“It’s a fairly complex environment that we need to navigate,” he added.

Espenilla’s neutral comments came on the heels of BSP Deputy Governor Diwa Guinigundo’s statements that the country’s five-year-high inflation rate was easing, based on the latest data, which showed month-on-month price increases moderating.

Given the dovish inflation picture being painted by the central bank, an investment strategist for  HSBC said the banking giant now expected the BSP to refrain from hiking interest rates until the third quarter of 2019.

The US Fed will announce its decision on interest rates on Thursday.

The BSP, on the other hand, will have its policy-setting meeting on June 20 — moved a day earlier from the original June 21 schedule — after having hiked its key overnight rates by 25 basis points during its May 10 session.