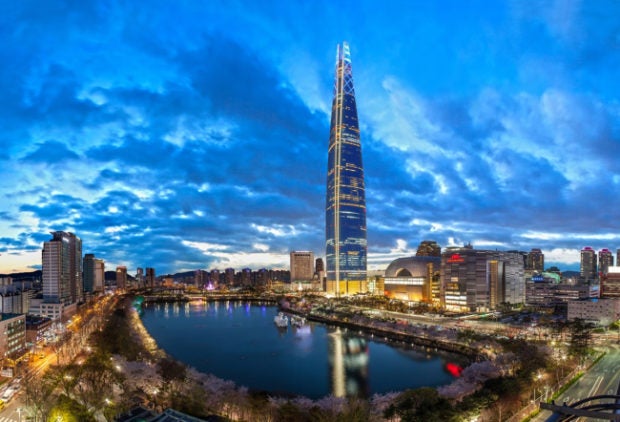 SEOUL — The possibility of North Korea opening up is something not just Hyundai Group is preparing for, with other South Korean conglomerates like Lotte, Hyosung and Posco also anchoring hopes on making inroads into the uncharted market in advance.

Retail giant Lotte has been aggressive in forming a task force to study the North Korean market and neighboring countries Russia and China. Communication head Oh Seong-yeop is leading the team to conduct feasibility studies on promoting the tourism industry in North Korea and its impact on countries nearby.

Lotte has been investing in the Far East region of Russia and northeastern China to operate shopping malls, hotels and farms. A massive property development has been underway in Shenyang, with Lotte building shopping malls, residences and tourism sites in the city, a transport hub for northern China. In line with the Shenyang project, Lotte has acquired a hotel in Vladivostok, and a farm in the Maritime province of Siberia.

“If a trans-Korea railway is connected to the trans-Siberian railroad as agreed by two leaders of Korea (in April), we expect to play a contributing role in inter-Korean cooperation by vitalizing tourism business in the North by hotels and farms in Russia and Shenyang Lotte World in China,” Lotte said in a statement.

Lotte’s interest in the North began long ago, the company said. It launched a team to push ahead with North Korean business in 1995 and reviewed plans to build a confectionary plant with the cooperation of the North’s trade agency. Three years later, Lotte was granted permission by the South Korean government to build a Lotte Choco Pie plant near Pyongyang. The project was suspended due to the political and economic instability the South suffered from the 1997-98 Asian Financial Crisis. From 2002 to 2014, Lotte supplied products to workers at the Kaesong joint industrial park.

Lotte plans to cooperate with global organizations in providing cultural and economic support to people in the North.

“First we will strengthen ties with regions in the North and expand cultural exchanges and humanitarian support,” said Oh, vice president of Lotte Corp.

Hyosung has already been making inroads into Vietnam seeking to capitalize on cheap labor there for its labor-intensive textiles production. Hyosung appears to have keen interest in not only North Korea’s labor force, but its power infrastructure as well.

The company is expecting new orders in the North, citing the desperate demand for power infrastructure. Hyosung manufactures extra high voltage transformer and circuit breakers. Power plant builders like Korea East-West Power Corp. have already come up with virtual plans to build solar, wind and thermal power plants. The company expects to repair old thermal plants in the North. Out of nine thermal plants, eight are more than 30 years old.

Steelmaker Posco has reviewed a series of business opportunities, but has indicated it is too early to say.

“When the inter-Korean relationship was in a good mood, we used to have North Korea’s anthracite coal for (our) steel mill,” said Jeon Jung-seon, vice president at Posco, in a quarterly report on April 24.

“I can’t say much but I believe we can play an active role (in regards to inter-Korean business).”

With heavy industries and builders painting rosy pictures, tech giants like Samsung and LG have taken a backseat, saying stable electricity supply and other infrastructure are musts for their operations.

Experts say that in the long term, the high-value-added technology industry will enjoy a new market in North Korea, as it falls far behind in terms of information technology devices, telecommunication networks and leisure.