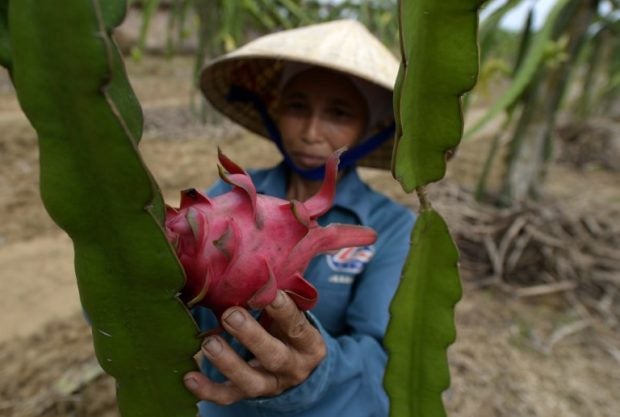 This picture taken on July 24, 2013 shows a farmer working at a dragon fruit garden on a private farm in Dong Son district, central province of Thanh Hoa. In some rural areas of Vietnam, a model of private farms combining gardening, fishing and domestic animals has been encouraged to help improve the success of farmers. AFP PHOTO / HOANG DINH Nam / AFP PHOTO / HOANG DINH NAM

HANOI — Dragon fruit has dominated Vietnamese fruit exports in the first four months of 2018 with total exports reaching US$427 million, a year-on-year increase of 9 percent.

Thanks to favorable exports, prices of different variations of dragon fruit in the raw materials sector have remained high since the beginning of the year. The price of white dragon fruit currently stands at about VND20,000 (US$0.87) per kg while red dragon fruit sells for VND40,000 per kg. In addition to Binh Thuan, called the “dragon fruit capital,” the fruit is now being grown in many southern provinces in Vietnam, specifically Long An and Tien Giang.

Aside from dragon fruit, mango exports also made a strong impression by doubling its export value in the first four months of the year compared to the same period last year, reaching US$104 million and pushing its market share from 5 percent in 2017 to nearly 8 percent from January to April 2018. Mangoes are mainly exported to China, the Republic of Korea, Australia, and Japan.

The value of mango exports to Chinese market during the same period reached US$95 million, up 119 percent over the same period last year and accounting for 91 percent of Vietnam’s total export turnover of mangoes.

According to statistics from the Department of Farm Produce Processing and Market (DFPPM) under the Ministry of Agriculture and Rural Development, fruit and vegetable exports from January to May reached US$1.62 billion, an increase of 16.4 percent against the same period last year.

In order to maintain the export growth of vegetables and fruits and avoid devaluation, the DFPPM said Vietnam’s fruit and vegetable industry must maintain control over quarantine and food hygiene and safety, especially pesticide residues. In addition to inspecting and speeding up the processing of factories every year, they must coordinate with localities to concentrate on reinforcing the raw materials sector to ensure the quality of raw materials for production and processing for export, the DFPPM said.