US, China reach $1.4B ZTE deal amid signs of progress on trade | Inquirer Business

US, China reach $1.4B ZTE deal amid signs of progress on trade 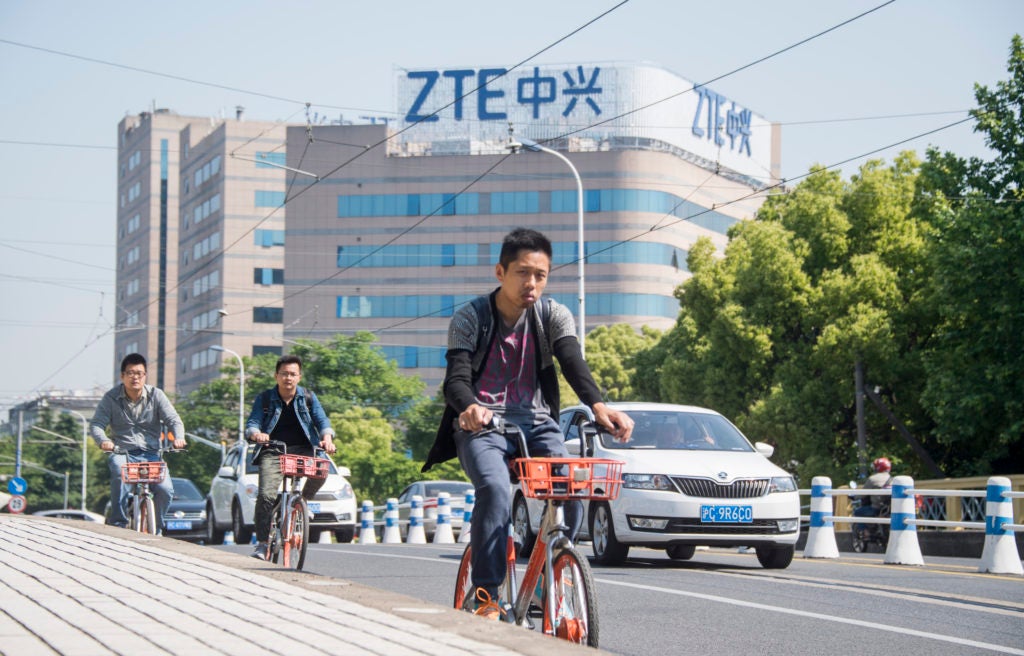 The ZTE logo is seen on an office building in Shanghai on May 3, 2018. Washington and Beijing have reached a deal to ease sanctions that brought Chinese smartphone maker ZTE to the brink of collapse. / AFP PHOTO / Johannes EISELE

WASHINGTON, United States – Washington and Beijing have reached a deal to ease sanctions that brought Chinese smartphone maker ZTE to the brink of collapse.

The arrangement was seen as a possible indication of progress in fraught trade talks between the world’s two largest economies.

United States Commerce Secretary Wilbur Ross, who announced the deal on Thursday, reiterated a denial that there was any connection between the agreement and trade talks.

But the ZTE settlement comes just days after Beijing reportedly offered to ramp up purchases of American goods to help cut the yawning trade imbalance with the US – moving part-way towards meeting a major demand of US President Donald Trump.

The defusing of tensions with Beijing is good news for Trump, who is preparing to face outraged allies at this week’s Group of Seven summit in Canada, where Europe and Canada will voice their strenuous objections to US steel and metal tariffs.

Not all was rosy – US lawmakers threatened legal action against the ZTE deal, saying the telecoms firm posed an “espionage risk” to America in addition to having violated its sanctions on Iran and North Korea.

Ross told CNBC on Thursday the deal was tough and would keep ZTE on a short leash.

“This is a pretty strict settlement – the strictest and largest settlement fine that has ever been brought by the Commerce Department against any violator of export controls,” he said.

In April, Washington banned the sale of crucial US components to the company after finding it had repeatedly lied and failed to take action against workers responsible for the sanctions violations.

The company was fined $1.2 billion in 2017. But under the deal announced on Thursday, ZTE will pay an additional $1 billion penalty and put another $400 million in escrow to cover possible future violations.

ZTE will also be required to change its entire board of directors and hire outside legal compliance specialists who will report to the Commerce Department for 10 years.

In return, Washington will strike the company from a sanctions list.

Another shoe to drop?

Both Republican and Democratic lawmakers threatened to take congressional action that could block or alter the deal, calling ZTE a threat to US national security.

“There is absolutely no good reason that ZTE should get a second chance and this decision marks a 180-degree turn away from the president’s promise to be tough on China,” Chuck Schumer, the Senate’s top Democrat, said in a statement.

“It’s up to Congress now to act to reverse the deal,” Schumer added.

Republican Senator Marco Rubio said: “After today’s decision to give #ZTE a pass, we have introduced a bipartisan amendment to restore penalties on ZTE.”

The clash raised the prospect that Trump’s own Republican party could work to undermine key planks of his trade agenda.

Despite the settlement, there was no sign Trump had veered from plans this month to impose as much as $50 billion in tariffs on Chinese imports to punish Beijing for its alleged theft of American technology and know-how.

Washington and Beijing have pursued a halting series of trade talks, with Trump demanding a $200 billion reduction in its trade deficit with China.

Ross insisted the ZTE deal was an enforcement matter unrelated to the trade talks, which he has led.

“It happens that I have been involved with the other negotiations with China. But that’s quite separate,” he told CNBC.

But Ross’s denial appeared to conflict with Trump’s own public statements.

In a tweet posted May 14, Trump said the new ZTE deal was “reflective of the larger trade deal we are negotiating with China.”

US officials said China last weekend offered to buy an additional $70 billion in US goods to cut the trade deficit – on condition that Trump call off the planned tech-sector tariffs.

William Reinsch, a trade expert at the Center for Strategic and International Studies, said the ZTE offer suggested Beijing had made concessions to Trump on trade but it remained unclear whether these were of equal value.

Beijing’s reported offer to buy $70 billion in goods was “peanuts” compared to the $200 billion cut in the US trade deficit with China that Trump demanded, Reinsch told AFP.

“It’s hard to believe there’s no linkage but Ross clearly left Beijing without anything last weekend,” he said. “I think there’s another shoe to drop.”   /kga