‘The house that fried chicken built’ expands through franchising
By: Doris Dumlao-Abadilla - Reporter / @philbizwatcher
Philippine Daily Inquirer / 05:12 AM May 25, 2018 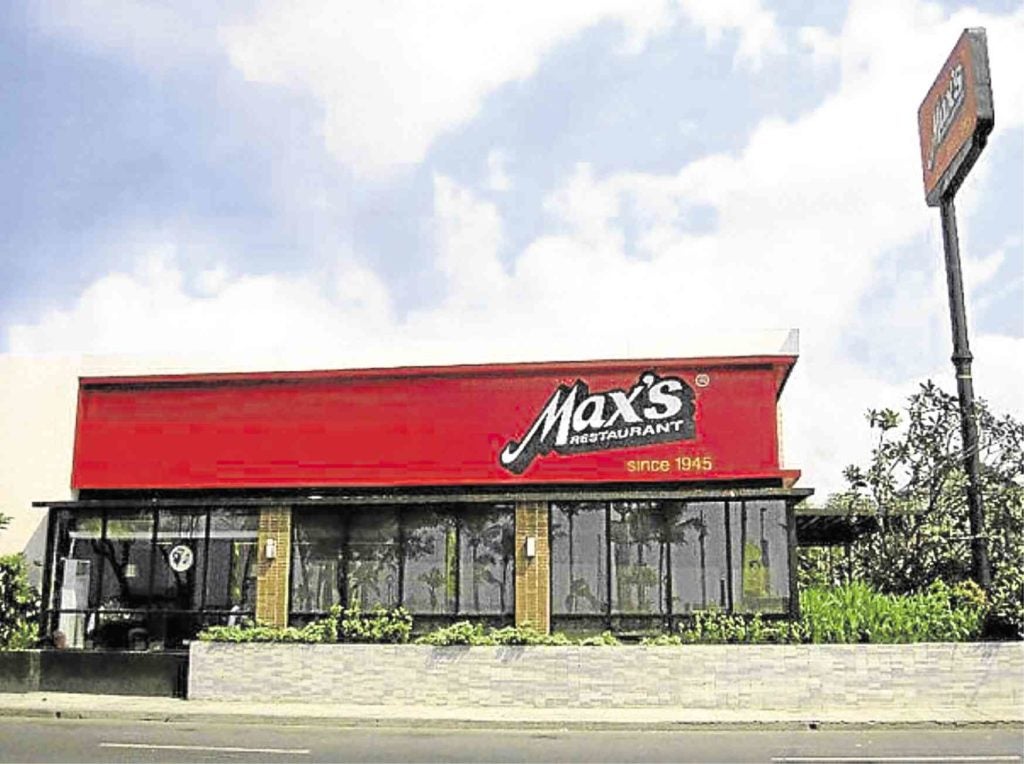 Max’s Restaurant—“the house that fried chicken built”—is one of the most recognizable Filipino casual dining chains out there, having been around for the last 70 years.

The Americans regularly visited Maximo’s home for drinks and later on, insisted on paying for their drinks.

Maximo was thus inspired to open a café, which initially served chicken, steak and drinks.

Maximo’s niece, Ruby, who managed the kitchen, created a special recipe for fried chicken that became an instant favorite among the GIs.

Word spread about the yummy chicken—tender, juicy and crispy—and Max’s Restaurant was born.

Over the years, the group—now under the holding firm Max’s Group Inc. (MGI)—has expanded its portfolio.

The acquisition of publicly-listed Pancake House in 2014 paved the way for the expansion of its brand offerings, the group’s backdoor-listing on the stock market and the subsequent P3.5-billion public offering.

MGI president Robert Trota said that at present, 65 percent of the network is company-owned while 35 percent is franchised.

The goal is to reverse this mix in the next three to five years, Trota said in a press briefing after MGI’s recent stockholders’ meeting.

“As we regularize more people, your labor cost will start to increase, but as we pivot toward franchising, labor cost will not be part of the business anymore—which is what we wanted because we believe the franchisees have the ability to manage the people more effectively than us. [There’s] more agility also for them and for us, we’d like to focus more on driving the core business, and I think franchising is the model we want to use,” Trota said.

Of the new local stores to be rolled out, two-thirds will be franchised stores in line with the pivot cited by Trota.

“Our family wanted to venture into the food industry but we knew nothing about that business so we just decided to get a franchise. At least with that model, everything is already set up and we can leverage on the franchisor’s expertise,” said lawyer Diane Garcia, whose family is among the group’s biggest franchisees.

“Our first franchised brand was Max’s Restaurant, way back in 1998. We were one of the first five franchisees of the brand, and we decided to go for it because it is a household name. Everybody knows Max’s, The House That Fried Chicken Built. It has a strong recall across demographics,” she said.

Twenty years after the Garcias first signed with MGI, the family is now one of the group’s biggest partners with a total of 12 stores—three Max’s Restaurant branches in Luzon and one in Vancouver, and five Pancake House stores in the Greater Manila Area—and three more slated to open this year.

“I am very satisfied with the company’s culture when it comes to all aspects of the brand. They are able to address all that is necessary for a company to succeed. Product safety is a priority for them. While it does require a higher initial investment, it pays for itself in the end because customers are delighted and they do come back. They also value their employees by providing a good working environment and opportunities for career development. These are just some of the things that we believe in and something we practice in our own company as well,” Garcia said.

“Like any commercial venture, we experience the usual business bumps and trials, so it’s not always perfect, but it’s always resolved. That’s what matters. Our mutually beneficial relationship is built on trust and confidence, and I believe that all partnerships should have a foundation like this,” Garcia said.

A potential franchisee needs to invest around P15 million to P18 million to own a Max’s franchise. The cost includes store construction, equipment and machinery, furniture and fixtures, initial hiring and training of manpower, preopening marketing support, operational support and franchise fee.

The estimated capital outlay to acquire and build a Dencio’s franchise is P15 million to P18 million, the same as the cost for a Max’s franchise.

For all of MGI’s brands, the franchise term is 10 years, renewable for another five years.

For Pancake House, the franchise fee is P1 million plus taxes and service fee ranges between P250,000 and P400,000 plus taxes.

The term of franchise is 10 years, renewable for five years. Franchise renewal fee is P650,000 plus taxes.

On franchising, MGI is pitching area development deals to franchisees, whereby franchise-holders with a proven track record will be offered the opportunity to operate franchises of other brands within the group.

In 2017 alone, a total of 40 franchise agreements were awarded across MGI’s brands, 15 of which were cross-franchise deals, which meant that existing partners of the company have decided to expand their business by opening at least one more store of another brand from the group.

Another 14 were given to current franchisees who signed up to add more branches of the existing brands they manage. There were 11 new partners who joined the system for the first time last year.

The Philippine Franchise Association estimates that the franchising industry will grow further—by 30 percent this year alone—and that food concepts such as Max’s will remain among the most popular.

Franchising is likewise MGI’s ticket to offshore expansion as 200 out of 1,000 stores expected by 2020 are expected to be overseas.

This year, MGI expects to secure agreements in two to four new territories.

It is also in talks to bring the Max’s brand to Australia and to bring another brand to Vietnam.

“MGI’s strength comes from the trust we build with our franchisees whom we consider valued partners. We look forward to growing with them and bringing onboard more like-minded entrepreneurs as we realize our vision of building loved brands,” said MGI chief operating officer Ariel Fermin.