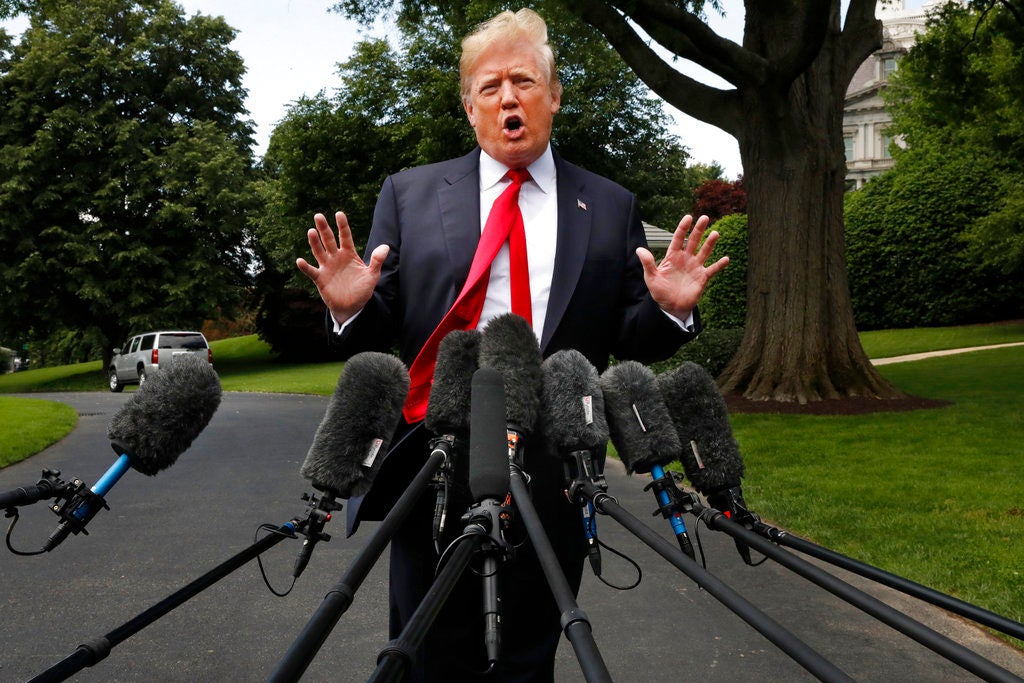 President Donald Trump’s hair is ruffled by a breeze as he speaks to the media on the South Lawn of the White House in Washington on Wednesday, May 23, 2018, en route to a day trip to New York. Trump will hold a roundtable discussion on Long Island on illegal immigration and gang violence that the White House is calling a “national call to action for legislative policy changes.” (AP Photo/Jacquelyn Martin)

WASHINGTON — The Trump administration launched on Wednesday an investigation into whether tariffs are needed on the imports of automobiles into the United States, moving swiftly as talks over the North American Free Trade Agreement (NAFTA) has stalled.

President Donald Trump predicted earlier that US automakers and auto workers would be “very happy” with the outcome of the NAFTA talks.

The White House said in a statement that the President had asked Commerce Secretary Wilbur Ross to consider whether the imports of automobiles, including trucks, and automotive parts threaten US national security. The president said in the statement that “core industries such as automobiles and automotive parts are critical to our strength as a Nation.”

The US remains far apart on the talks over rewriting the trade pact with Canada and Mexico, with the discussions at an impasse over rules for car production. The initiation of the trade investigation could be seen as an attempt to gain leverage in the talks with the two US neighbors. Treasury Secretary Steven Mnuchin has said that efforts to renegotiate the trade agreement could spill into next year.

Nearly half of the vehicles sold in the US are imported, with many coming from assembly plants in Mexico and Canada.

During a meeting with auto executives earlier this month, Trump said he would push for an increase in the production of vehicles built at US plants. He has also criticized European Union (EU) auto imports and tariffs, and earlier this year threatened a “tax” on European imports.

A person familiar with the discussions said the President has suggested seeking new tariffs of 20 to 25 percent on automobile imports. The person spoke on condition of anonymity and was not authorized to speak about private deliberations.

Trump brought a little-used weapon to his fight to protect auto workers: Section 232 of the Trade Expansion Act of 1962. The provision authorizes the president to restrict imports and impose unlimited tariffs on national security grounds.

The Trump administration used that authority in March to slap tariffs of 25 percent on imported steel and 10 percent on aluminum imports. Until then, the US had pursued only two such investigations since joining the World Trade Organization in 1995. Both times — in a 1999 case involving oil imports and a 2001 case involving iron ore and steel imports — the Commerce Department refused to recommend sanctions.

Critics feared that other countries will retaliate or use national security as a pretext to impose trade sanctions of their own.

Daniel Ujczo, a trade lawyer with Dickinson Wright PLLC, said the tariff threat is likely meant to pressure Mexico into accepting US demands for NAFTA changes that would shift more auto production to the US from Mexico. But he questioned whether it would work.

“I do not believe that it will have the desired effect,” Ujczo said. “Everyone knows that (the investigation) will take too long and has no chance of surviving any legal challenge.”

Trump offered a hint about the move earlier in the day on the South Lawn, telling reporters that “you’ll be seeing very soon what I’m talking about.” He noted that both Mexico and Canada have been “very difficult to deal with” during the negotiations.

“I am not happy with their requests. But I will tell you in the end we win, we will win and will win big,” Trump said before departing for New York. He said America’s neighbors have been “very spoiled because nobody’s done this but I will tell you that what they ask for is not fair. Our auto workers are going to be extremely happy.”

Mexico has so far resisted US attempts to get higher regional content rules in the auto industry and move production to higher-wage U.S. and Canadian factories. The US has also sought to change NAFTA’s dispute-resolution system, and include a sunset clause that would allow countries to exit after five years.

The Trump administration has already missed an informal deadline that had been set by House Speaker Paul Ryan to get a revamped deal to Congress in time for lawmakers to vote on it in a midterm election year. Mexico, meanwhile, will hold presidential elections on July 1, and Andres Manuel Lopez Obrador, the leftist candidate who has led in polls, has said the re-negotiation should not be rushed through and should be left to the winner of the election.

If the negotiators fail to agree to a revamped version of NAFTA, the discussions could be extended into 2019. Trump could also carry out his threat to abandon the agreement that he has long railed against, throwing commerce among the three countries into disarray.

Trump has sought to overhaul NAFTA in an effort to return auto production to the US and reduce America’s trade deficit. The US has been demanding that a percentage of a car’s content of auto parts originate in a country — the US or Canada — with average auto worker wages of about $15 an hour to qualify for NAFTA’s duty-free status.

But companies have built supply chains that straddle NAFTA borders and changing the rules could disrupt their operations, raise costs, and potentially put them at a competitive disadvantage with manufacturers in Asia and Europe.         /kga