In the Boracay aftermath, eco-tourism is next big thing 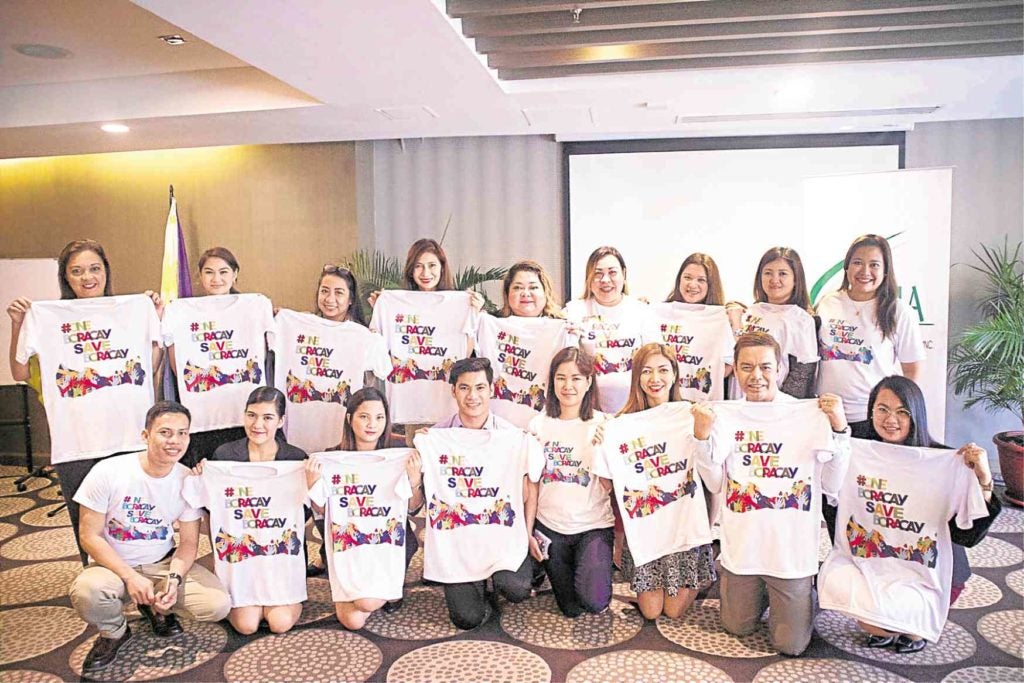 HSMA members offer support for colleagues affected by the temporary closure of Boracay. Proceeds from the sale of “#OneBoracay” shirts are pooled to provide modest cash assistance to displaced island workers.

With the mess Boracay has become, the country’s tourism program should focus on sustainability.

John Paolo R. Rivera of the Asian Institute of Management’s Center for Tourism said the travel and tourism industry should not just think of numbers but preserve what they had to offer.

Many eco-tourists—people who appreciate and enjoy a relatively preserved and protected nature—were from affluent countries and ready and able to spend more, he noted.

Rivera was the resource person during the general meeting of the Hotel Sales & Marketing Association International, Inc. (HSMA) at the Bayleaf Hotel in Intramuros, Manila.

During the meeting, HSMA announced the country’s first Great Room Sale happening on May 30 to 31 at the Glorietta Activity Center in Makati City. The group also launched the 2018 Virtus Awards that would be given out on Oct. 8.

Against the backdrop of the Boracay debacle, Rivera made a pitch for eco-friendly or sustainable tourism.

“Emerging destinations are eco-tourism related,” he said.  Sustainability would ensure that those destinations would be enjoyed by more people and for many years to come.

Rivera said the eco-tourism market “is the fastest growing sector” of the tourism industry, expanding at the rate of 5 to 50 percent.  “Tourists who do not know about sustainability are terrorists …  because they destroy their destinations,” he said.

The industry, he added, should be guided by the three Ps —profit, people and the planet. It could not be only about money, he said.

Tourism, like many other things, should be seen as a system having cause and effect. Everything is interrelated.

“Boracay was seen as a money-maker, not a system,” Rivera said, “so industry people on the island simply counted the numbers (of tourist arrivals).”

Sustainability would ensure that the money-maker would survive and thrive, draw more people and generate jobs.

Rivera said one way to attract the “right kind of tourists” was to make the destination more expensive. He cited Batanes as an example of such.

But the Philippines was more into mass tourism, offering budget-friendly packages, rather than sustainability, Rivera noted. Many destinations were afraid to raise their prices because they were not sure they could deliver, he said. Destinations were being promoted before they were ready and did not have the necessary infrastructure and facilities to accept hordes of people.

On the four-year-old Virtus Awards, Rose H. Libongco, chair of the awards program and an HSMA founder, said the recognition aimed to honor the heroes and heroines of the hospitality industry. She pointed out that selling a hotel was more challenging than marketing a consumer product, which could get a significant boost just from media advertising campaigns.

“People have different demands for hotels,” she said, so there could be no one-size-fits-all sales campaigns. Promotional efforts should be target- and purpose-specific, among other things, Libongco said.

Libongco said they would be looking for excellence and how nominees faced the challenges of their jobs.

HSMA, she said, wanted to raise the flag for marketing and intensify the campaign to raise standards as the association’s legacy. They wanted to empower sales people to contribute to the bottom line and be role models of professionalism  and excellence.

Meanwhile, the first Great HSMA Room Sale will offer discounts of up to 60 to 70 percent on hotel and resort accommodations. A free upgrade to the next room category or suite is also offered. Entrance to the event is free.

Prior to its general meeting, HSMA conducted a job fair for displaced Boracay hotel and resort workers. It is also offering financial and other kinds of assistance and is selling t-shirts to raise funds for the workers.

HSMA, which is composed of hotel sales and marketing professionals, has over 120 hotels and resorts as member-partners. —CONTRIBUTED