Stocks in Europe advance as focus turns towards US Fed decision 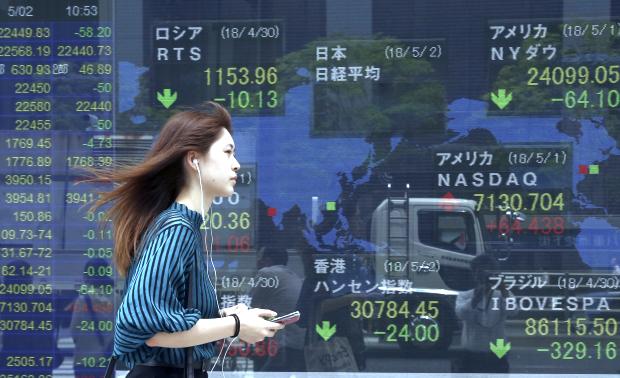 A woman walks by an electronic stock board of a securities firm in Tokyo, Wednesday, May 2, 2018. Shares are mixed in Asia after a topsy-turvy May Day session on Wall Street, where most benchmarks recovered from early losses as Apple led a rally in technology companies. (Photo by KOJI SASAHARA / AP)

LONDON — Shares in Europe advanced Wednesday as investors looked ahead to the latest policy meeting of the US Federal Reserve and to China-US trade talks later in the week.

Much of the market’s attention will be on the upcoming rate decision from the Fed.

Though the central bank is expected to keep borrowing rates unchanged, traders will be particularly interested in the accompanying statement and whether it signals a change in tone on the interest rate front, specifically whether its lining up a fourth increase this year.

Most analysts think the Fed will echo its most recent statement and that it will wait for upcoming data, such as this Friday’s nonfarm payrolls report for April.

“Still, with the central bank having previously projected three this year with an additional next, even a slight hawkish shift in the statement could convince traders that a fourth is more likely,” said Craig Erlam, senior market analyst at OANDA.

Uncertainty over trade tensions between Washington and Beijing is mounting as top US officials prepare to head to Beijing for talks aimed at defusing worsening tensions over the trade imbalance.

The Trump administration decision Monday to delay a decision on imposing tariffs on steel and aluminum imports sidestepped a potential trade battle with Europe for now, though but European Union leaders want a permanent exemption and say the delay in resolving the issue is bad for business.

After posting its highest growth in a decade during 2017, the 19-country eurozone has come off the boil at the start of the new year, largely because of temporary factors such as the “Beast from the East” cold weather phenomenon that gripped much of Europe in late winter.

In its first estimate, Eurostat, the European Union’s statistics agency, said Wednesday that growth across the single currency bloc slowed in the first three months of the year to a quarterly rate of 0.4 percent from a hefty 0.7 percent tick the previous quarter.

Despite the slowdown, growth was higher than the equivalent in the US.

Oil prices were mixed. Benchmark US crude was up 18 cents at $67.43 a barrel, while Brent crude, the international standard, fell 18 cents to $72.95 per barrel in London.