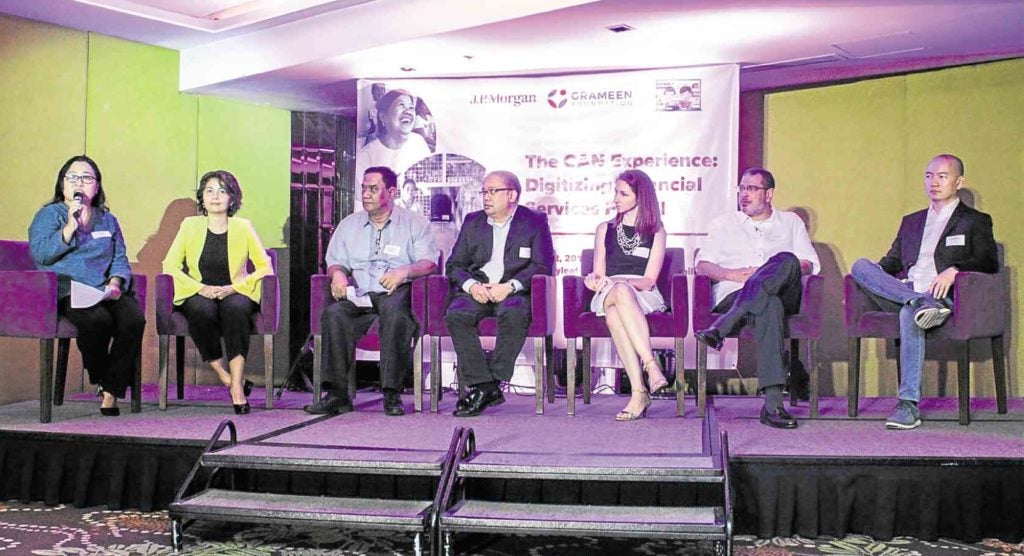 Important issues are discussed during the enabling the environment for financial inclusion panel discussion.

Digital financial inclusion programs that require the use of smartphones may not help much to ease the plight of poor unserved and underserved women in the Philippines—at least, not yet.

This was one of the findings of the Community Agent Network (CAN) launched by the Grameen Foundation (GF) in 2015 and funded by J. P. Morgan and Tomberg Family Philanthropies.

“Solutions that require mobile phone ownership, or those that work only on smartphones with data connection will leave behind a large segment of the population,” the study found.

Lauren Hendricks, GF executive vice president, pointed out, “Many women do not own the digital tools (phones and gadgets needed for digital inclusion programs).”

At the recent presentation of the CAN study, Hendricks said while mobile technology had the potential to transform the lives of millions of people, “financial inclusion required more than just access to financial products.”

Hendricks underscored the need to find other ways to make financial inclusion a reality for many women.

She said, while the benefits of simply having a savings account were well known, some 1.1 billion women still lacked access to financial services.

Financial inclusion, she said, would have a profound effect on families, improving access to basic needs like food, education and health care.

As the CAN program found, one way to bridge the digital divide was to have agents do the digital transactions for other women.

“The CAN program was able to validate that agent-assisted delivery of financial service remains the most appropriate method of transaction to target the financially excluded,” the study said.

Hendricks pointed out that digital financial services were suited to women because privacy was important to them.

“Digital transfers are invisible so other people would not know how much money a woman is getting,” whereas cash transactions were open and public.

She added that women wanted control over their finances, which digital tools could provide.

Hendricks underscored the need to have more women banking agents to encourage more women to avail themselves of financial services.

CAN beneficiaries expressed a greater willingness to work with people they already knew, which meant agents should come from the communities they would be serving and should be familiar to the people they were trying to reach. Women were also more comfortable dealing with other women.

At the moment, the most in-demand financial service provided by community agents was mobile phone airtime top-ups. But many were gradually moving to payments for utilities and services.

CAN proponents saw a great potential to scale up services to include even more payment transactions, including government fees and charges.

Gigi Gatti, GF regional director for Asia, said, while there were many opportunities for financial inclusion, they realized behavior of the target population would not change overnight.

However, since the launch of CAN, she said “the payments space has grown at a really fast pace.”

Gatti said, “When people start trusting a payments platform, they become curious about what else they can do—and that leads to other opportunities.”

Roberto Panlilio, J.P. Morgan Philippines senior country officer, said a model for growth was one that removed barriers to the achievement of equality and financial inclusion.

He said there was a need to offer well-timed information and affordable products.

Since 2015, CAN had succeeded in delivering financial services to the unserved and underserved, he said.

CAN was launched on Panay Island in 2015. As of January 2018, the network had a total of 1,896 agents serving 423 barangays all over the country. Some 75 percent of the agents are women.
The agents have produced a total transactions volume of 4.3 million valued at P1.3 billion. —CONTRIBUTED