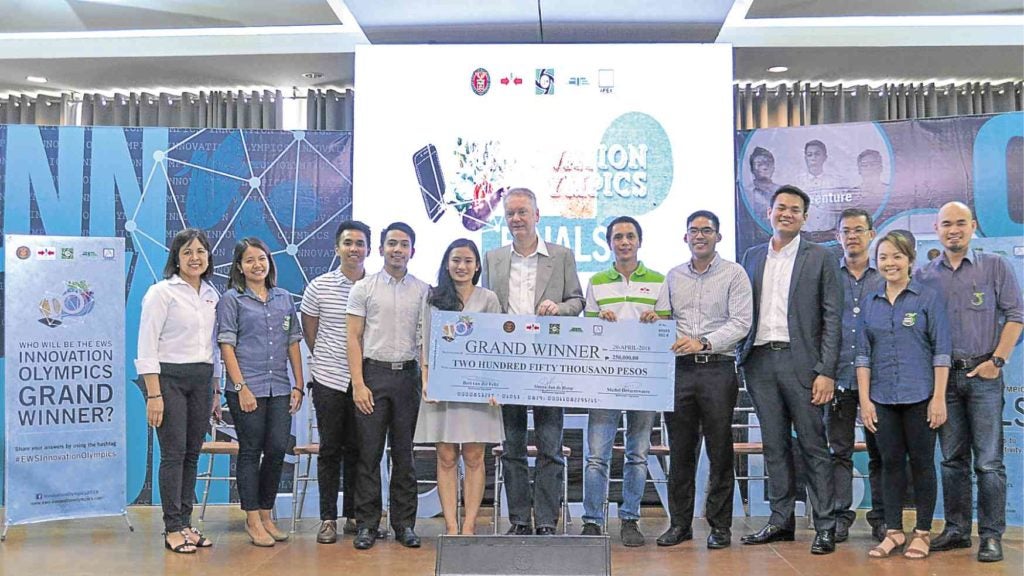 CHAMPIONS The innovators who conceived “e-magsasaka” pose with East-West Seeds Philippines general manager Henk Hernans, (sixth from left) and Dexter Difuntorum, the group’s mentor, when they were awarded a ceremonial check for winning the first Innovation Olympics in San Rafael, Bulacan. —CARMELA REYES-ESTROPE

SAN RAFAEL, BULACAN—In the near future, the country’s farmers could start selling their produce in a digital market, thanks to students who believe they have finally found a way to make food producers richer.

An online database platform called “e-magsasaka” hopes to reduce the involvement of middlemen in marketing crops and eventually increase farmer profits by 20 percent and keep prices at an affordable level, said a group of graduates who took home the P250,000-prize in the first Innovation Olympics organized by East-West Seeds.

He said the winning entry addressed two of the major problems of farmers—direct access to markets and the absence of market information among buyers and food growers.

The “e-magsasaka” online platform is a database where buyers could locate farmers who grow the produce they require.

The platform also allows farmers to actively market their crops.

“The principle in farming [which the online tool embraces] is to focus more on the marketability rather than the production [of crops],” Sarmiento said.

Interested buyers and farmers can register at www.emagsasaka.com for free until the end of the year.

Once linked, they get real-time updates on available crop supplies, deliveries and payments.

Farmers are required to post-crop development schedules to allow buyers to time their shipment close to the date of harvest.

The “e-magsasaka” also widens the market possibilities of farmers who used to sell their produce only at local trading areas.

“Take farmers of San Ildefonso town in Bulacan. Their concentration of deliveries will not only be limited to Balintawak and Divisoria where they commonly bring their products,” Sarmiento said.

“The products being produced by our farmers have difficulties in reaching the potential markets especially those away from Manila. This innovation will bring to poor farmers, groups and cooperatives the technology they need to yield better sales and marketability,” said Henk Hernans, general manager of East-West Seeds Philippines.

East-West Seeds, founded in 1982, has become one of the leading plant breeding specialists in Southeast Asia.

It focuses on small farmers, who represent 85 percent of the world’s food producers.

Read Next
Power of the pen in Davao
EDITORS' PICK
As campaign heats up, Trump woos Latino, Black voters
Pacquiao camp says McGregor fight being considered
The power of two: Renewable energy and natural gas are the cleaner, better combination
KZ Tandingan taking it one step at a time
SMC applying sustainable measures vs geohazards in Bulacan airport site — Ramong Ang
Water remains our saving grace right now
MOST READ
GCash to begin charging bank transfer fees from Oct. 1
DepEd disowns self-learning module using ‘dirty names’
Has Duterte done any good? Robredo says yes, but he missed out on many things
Even without corruption, Manila Bay rehab is not OK during pandemic – Robredo
Don't miss out on the latest news and information.