Meet some of PH’s Fil-Indian businessmen 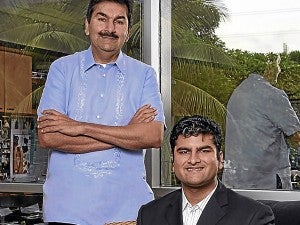 Born and raised in the Philippines, Ramesh Dargani is the exclusive distributor of the high-end eyewear brands Oakley and Sunglass Hut. His father Jiwanlal, an émigré from India, ventured into the optical business before setting up a hosiery mill.

A graduate from De La Salle University, the younger Dargani worked for his uncles in the eyewear industry before he went on his own.

Hiren Mirchandani, 27, is the sales and marketing manager of the family business Ramesh Trading Corp., which specializes in houseware. His grandfather, Hakoomal, migrated to the Philippines in the 1930s as a teenager, to work for his uncle, also an émigré, who started a bicycle store.

Hakoomal then started his own business selling general merchandise in a store called Regent Merchandising, which has evolved into Ramesh Trading Corp.  His father Haresh refocused the business to home products.

“I’ve computerized the entire office system, created an enterprise resource planning so there’s data flow from the import to sales. It helps speed and efficiency,” he says.

Dargani and Mirchandani are Sindhis, an ethnic group that originally hailed from the province of Sindh, Pakistan. Sindhis are known for their business savvy. Yet, the Philippines are their home.  They have Filipino passports and speak Tagalog.  Dargani wears a barong for business meetings. Although their parents are Hindus, they studied in Catholic schools.

They still celebrate Indian festivals such as Diwali, the equivalent of New Year and patronize Indian cuisine.

Dargani is the president of the Federation of Indian Chamber of Commerce Inc. (FICCI).  Mirchandani became the youngest board director, at the age of 25, in the chamber’s 60-year history. His grandfather was also a director for two terms.

“I belong to one of the few families in the Indian community who has had more than one generation that served the board,” says Mirchandani.

The definitive book, “Rising India and Indian communities in East Asia,” by K. Kesavapany, A. Mani, Palanisamy Ramasamy, says among the Asian countries, the Philippines was the only country where there was no settled Indian community in the mid-19th century due to the restrictive colonialism.

The American regime facilitated British trade and, consequently, Indian business.  In the late 19th century, Sindhis started to trade in the Philippines.

The country experienced another wave of immigrants during the partition of India and Pakistan. By 1950s, the Sindhis owned the biggest stores in Escolta. To protect the local businesses, the Retail Trade Nationalization Act forced them to shift from wholesale business to  manufacturing.

In 1951, a group of Sindhis established the  Indian Chamber of Commerce, the precursor of the FICCI whose objective was to foster camaraderie among their community and to strengthen their ties  with Filipinos. The FICC is  one of the oldest Indian Chambers outside of India.

Through the years, the main concern of the Sindhi community has always been the visas.  In India, tourists don’t need to apply for visas unless they plan to stay  long in the country. On the other hand,  an Indian national has to apply for a Philippine visa, but the processing in Delhi or Mumbai  tends to be protracted.

“We gather that the Philippine embassy is looking into it,” says Dargani.  He adds that the FICC facilitates business visas for visitors, especially if they come at short notice.  The other concerns are no different from businessmen’s concerns: taxation and bureaucracy.

Still,  Dargani says  it’s been a good year for the FICC which has increased its membership by 20 percent or  a total of 191 active members.

The coffers have been at their highest. The membership dues are paid 100 percent. When a charity was launched, pledges worth P500,000 came from the floor.

Prominent guest speakers such as  Hans Sicat, chair of the Philippine Stock Exchange; BIR Commissioner Kim Henares;  Angelito Alvarez of the Bureau of Customs have graced their meetings.

“There are times that due to lack of transparency,  the law gets bypassed or the procedures are not clear.  There are certain government agencies that members have difficulty dealing with. They may come up to us to ask what we can do to help,” says Dargani.

“We try to establish relationships with government agencies and express our challenges so that they can come up with new rules in the process,” adds Mirchandani.

Mirchandani, “We plan to bring in business speakers to share their ideas to our members on how they run their enterprises successfully. This way we can  use it as a benchmark.”

“This was something the chamber has been lobbying for many years. It was a welcome development that the hard work had paid off. It came to fruition during our board’s tenure,” says Mirchandani. “Our past president Ram Sitaldas told us of his meeting with (PAL chair) Lucio Tan and his request for it.”

The scope of FICC’s membership is wide from small enterprises to international brands. Majority of the Sindhis look after their own companies.  “They don’t like to work for anyone else. It’s in their DNA. Anywhere you go in the world, the  Sindhis would run some of the biggest businesses,” says Mirchandani.

When it comes to numbers, Dargani adds, “They keep their cards close to their chests.”

In the membership roster, 22 companies are over 50 years old.  There are 106 companies engaged in trading, 33 in manufacturing (mostly apparel), services (11), microfinancing (9).

The group has maintained good ties with different sectors. “Many of our Fil-Indians know the mayor, barangay captain and the councilors.  When faced with challenges, they can count on their friendships. During Indian New Year, they send sweets as a token of appreciation. Through time, the relationship builds up. As business grows, so does the relationship,” says Dargani.

For all their influence and affluence, the Sindhis tend to be low key.

“We’re not flamboyant. We are simple and not showy,” says Mirchandani.

“They prefer to keep a low profile for security reasons,” adds Dargani.  “It’s been instilled by our parents to be humble.  We are taught not to flaunt wealth.  For press releases, the corporate leaders are asked to be photographed.  I prefer to take one step back.”